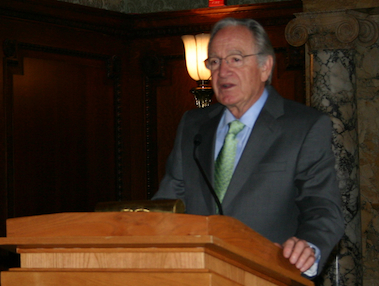 WASHINGTON, D.C. — Pubcasters meeting with Capitol Hill lawmakers Tuesday could start those conversations this time around with a confidence they might have lacked in years prior.

As they prepared their talking points, they heard from members of Congress who emphasized the rosier outlook for federal funding that pubcasting faces. Lawmakers voted in January to restore pubcasting’s CPB funding through fiscal year 2016 to $445 million, bringing appropriations back to their level prior to the automatic federal budget cuts enacted last year. Meanwhile, politicians have pulled back on threats to zero out CPB funding, at least for the time being.

“For the first time in several years, you’re not in the crosshairs,” said Rep. Earl Blumenauer (D-Ore.), chair of the congressional Public Broadcasting Caucus, as he addressed members of the Association of Public Television Stations Tuesday. “Now, admittedly that’s a pretty low bar. . . . But it’s an important start.” Blumenauer spoke at APTS’s annual Congressional Breakfast, held Tuesday at the Library of Congress.

APTS President Pat Butler said that public broadcasting has “turned a corner.” “I am hopeful that in years not too distant, we can actually look for some increased investment from the federal government, which is a sentence I could not have envisioned saying three years ago,” Butler said.

The last few years were bumpy for pubcasting. House Republicans led an effort in 2011 to defund CPB following controversy over NPR’s dismissal of commentator Juan Williams. Pubcasting funding entered the national debate again during the 2012 presidential election when Republican candidate Mitt Romney said he would eliminate federal funding if elected.

Butler expressed optimism despite the impending retirements of two veteran lawmakers who have championed public broadcasting: Sens. Tom Harkin (D-Iowa) and Jay Rockefeller (D-W.Va.). Harkin, chair of the Labor, Health and Human Services subcommittee of the Senate Appropriations committee with jurisdiction over CPB funding, accepted APTS’s first-ever Lifetime Achievement Award at Tuesday’s Congressional Breakfast. And APTS presented its Champion of Public Broadcasting Award to retiring Sen. Jay Rockefeller (D-W.Va.), chair of the Senate Committee on Commerce, Science and Transportation, which oversees the FCC and broadcast technology matters such as spectrum.

Butler cited “a lot of people standing in line to succeed Sen. Harkin and Sen. Rockefeller as champions of public broadcasting.” Sen. Patty Murray (D-Wash.), chair of the Senate Budget Committee, “is looking forward to taking on the mantle of Sen. Harkin as one of our great champions in the Senate,” he said.

Blumenauer expressed his desire to push for even greater federal support in pubcasting’s moment of strength and said he wants to “establish a permanent endowment for public broadcasting” that would erase the need for annual appropriations. He did not say whether other lawmakers would support such a bid.

Speaking to Current after the event, Butler cautioned that such an endowment could put pubcasting in an uncomfortable situation if funding did not meet the system’s needs.

“It just seems like a very heavy lift to get that big a corpus of money to sustain the system in the way that the federal appropriations currently sustain it,” Butler said. “What would be problematic for us is to create an endowment that would allow Congress to say, ‘OK, you got your endowment, you don’t need us anymore,’ but it’s not big enough to really sustain the system in the way we want to sustain it.”

Congress has maintained Ready to Learn funding at sequestration levels. In their meetings, pubcasters planned to push for continued funding at pre-sequestration levels for CPB and a bump back to 2013 levels for Ready to Learn. Members from rural stations, meanwhile, are asking for renewed funding of the U.S. Department of Commerce’s Public Telecommunications Facilities Program, which has supported digital transitions for rural stations. Congress zeroed out funding for PTFP in 2011, but the U.S. Department of Agriculture has continued to award digital transition grants, most recently a total of $2.5 million in January.

APTS encouraged its members to emphasize pubcasting’s role in promoting education, citizenship and public safety because “we have found that these three themes resonate very well across the political spectrum,” Butler said.

Correction: An earlier version of this story misidentified the U.S. Department of Agriculture as the former home of the Public Telecommunications Facilities Program. The program operated out of the National Telecommunications and Information Administration, part of the U.S. Department of Commerce.
Questions, comments, tips? lapin@current.org
ShareTweet EmailPrint More