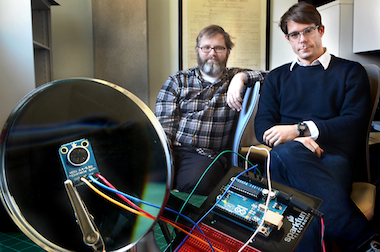 A student at the University of Missouri’s J-school in Columbia has teamed up with university licensee KBIA-FM on a project measuring noise levels of the city’s urban soundscape.

When Travis Hartman left Brooklyn, N.Y., to enter the journalism program in Missouri, he was surprised to find that his new home was even noisier than the big city he’d left. “I live downtown across from a bar,” he said, “and there’s a lot of traffic.”

Hartman devised a scheme: a network of dozens of small electronic sensors that measure decibel levels at locations throughout Columbia and create maps from the resulting data. The John S. and James L. Knight Foundation announced Jan. 22 that it will support Hartman’s efforts with a grant of $35,000.

A growing number of news organizations around the world are experimenting with using sensors to gather and present data, including the BBC and New York’s WNYC. Hartman learned of the possibilities of sensor journalism when he saw a presentation by Matt Waite, a data journalist and professor at the University of Nebraska–Lincoln.

“He kind of blew my mind,” Hartman said. “I didn’t even realize [sensor journalism] was part of the equation.”

Around the same time, Hartman noticed the noise levels of his new surroundings and wanted to put numbers on the loudness factor. Sensors seemed like a good fit for the job. “I’m inherently a lazy person,” he said, “so whenever I can make something else do the work for me, it seems like that’s a great timesaver.”

Nonetheless, a fair amount of work lies ahead for Hartman and his partner on the project, Justin Giles, an IT support specialist at the university. They’re currently busy loading software onto the programmable, battery-powered Arduino circuit boards that are to become the electronic ears of Columbia. The $30 boards are the same brand that WNYC has used for its sensor projects. Hartman hopes that each circuit board, plus the additional gear required to gather and transmit data, will fit in a box no larger than a brick.

Giles and Hartman must then figure out how to send data from the Arduinos to a server, and how to quantify and present the information. A heat map, for example, could highlight the noisiest areas in town and allow viewers to navigate backward in time to view trends.

Hartman expects to deploy 50 to 100 sensors around the city, but the final number will depend on the sensors’ sensitivity and the technology they’ll use to transmit data.

Residents of Columbia may be enlisted to help build sensors at community hackathons. “It becomes less intimidating for people, and it’s a good education,” Hartman said.

By inviting community participation, Hartman hopes to quell any concerns that the sound-monitoring project amounts to surreptitious surveillance. He doesn’t want to spook people, and expects the sensitive nature of the project might require cooperation with Columbia’s city council.