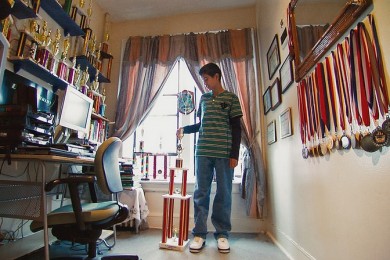 Alexis Paredes is one of the chess champions in Brooklyn Castle, a documentary on POV. (Photo: POV)

As part of CPB’s American Graduate dropout-prevention initiative, the public television documentary showcase POV has awarded $150,000 in grants to 17 PBS member stations for outreach associated with the films American Promise and Brooklyn Castle.

Alexis Paredes is one of the chess champions in Brooklyn Castle, a documentary on POV. (Photo: POV)

American Promise, more than 13 years in production, follows two African-American boys in Brooklyn from kindergarten through high-school graduation, addressing issues of race, class and opportunity. The film, which won the U.S. Documentary Special Jury Award at the 2013 Sundance Film Festival, was partly funded by CPB. It airs on POV in February 2014.

Brooklyn Castle looks at a junior-high chess squad that has won more than 30 national championships, more than any other team in the country, yet most of its students live well below the poverty line. It ran on POV in October.

“Parents in America are struggling to secure the highest quality education for their children,” said Cynthia López, co-executive producer of POV, in the announcement. “Local PBS stations are taking the lead by partnering with parents and community-based and educational institutions to help students in their communities achieve their full potential.”

Activities vary nationwide. Detroit Public TV will produce a segment profiling the Detroit City Chess Club and other after-school activities that improve academic performance. In Nebraska, NET will present a two-night broadcast about educational challenges for young men of color and will organize discussion salons statewide with partners including 100 Black Men of Omaha and the NAACP. And WHUT in Washington, D.C., will produce an episode of its Vocal Point public-affairs series on closing the achievement gap among black males.