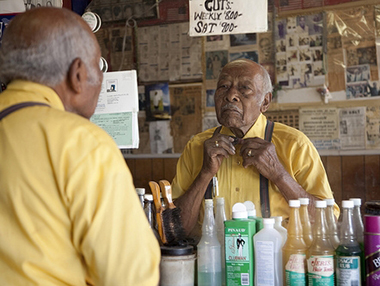 “The Barber of Birmingham,” a short film broadcast on PBS’s POV, is one of this year’s duPont-Columbia honorees. (Photo: Robin Fryday)

The Alfred I. duPont-Columbia University Awards, honoring standouts in broadcast and digital journalism, were announced Dec. 18, and the Center for Investigative Reporting, PBS documentaries and Public Radio International’s This American Life were among the honorees.

CIR won two awards, one for the multimedia investigation “Broken Shield,” about failures in California’s law enforcement, and another for a report spotlighting sexual assault of female farm workers, produced in collaboration with Univision and PBS’s Frontline. This American Life was recognized for “Harper High School,” its two-part series on a Chicago public high school affected by gang violence.

Other pubmedia winners included The Barber of Birmingham, a short documentary produced for PBS’s POV about an Alabama barber, and “The Lines Between Us,” a yearlong broadcast and multimedia series on income inequality in Baltimore produced by WYPR, a public radio station in the city.

The full list of winners can be seen here. The awards ceremony will take place Jan. 21 at Columbia University, co-hosted by ABC’s George Stephanopolous and Michel Martin, host of NPR’s Tell Me More.