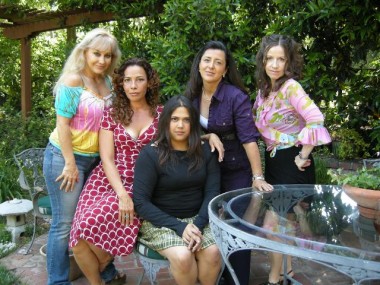 The experience prompted Meller to ponder portrayals of people of color by the media. “Often these are down-and-out stories, people suffering in the prison system, in rough urban settings, with financial problems,” she said. “I wanted to broaden that representation.”

Meller, born in the U.S. and of Chilean descent, was also searching for her own identity as a Latina.

She came across a New York Times article about a group of voice actresses who dubbed the ABC prime-time soap opera Desperate Housewives into Spanish for the show’s secondary audio program channel. One, Larisa Asuaje, voiced star Teri Hatcher’s lead role of Susan. “I’m honored to do that voice,” Asuaje told the newspaper. “But to be honest, there’s a part of me that says, ‘I wish I could be there,’” performing in the critically acclaimed program herself.

“That hit a nerve for me,” Meller said. “Here are women talking about being represented in the fictional television world. They’re thinking about what it means to be Latina on a daily basis, in their auditions, in everything they do. As a filmmaker, that’s something I wanted to talk about.”

That seed of an idea grew into Now En Español, an hourlong bilingual documentary now in postproduction from Latino Public Broadcasting. It’s set for national release by PBS in January 2014.

Initiating the film project was difficult. Meller reached out to the reporter who wrote the Times article, but she got no reply. She tried contacting each voice actress through their websites and agencies — again, nothing.

Exasperated, she called Rubén Veloso, an executive at CCI Digital, the postproduction house in Los Angeles that supervised the dubbing work. At the time, Meller was living in New York. “I fudged the truth and said I’d soon be in Los Angeles, and asked him to meet,” Meller said. When she arrived, “we had a long talk about our backgrounds, and that day he said, ‘Why don’t you come back tonight?’” That’s when actress Gabriela del Carmen would be dubbing the part of Lynnette, played on screen by actress Felicity Huffman.

After the two women chatted that evening, Meller said, “the ball started rolling quickly.” In 2008, Meller moved to Los Angeles. “I decided I had to be there if I was going to do this film,” she said.

The actresses “are like my tias [aunts],” she said. “They were so welcoming when I moved here — practically the only people I knew.” The women opened up to Meller about their lives, their hopes of securing full-time acting work, their struggles raising their children and paying their bills. During filming, one of them lost her home to foreclosure.

“It was horrible,” Meller said. “But that is reality. It’s hard to follow your dreams and survive, not just in Hollywood but in real life.”

The women speak both English and Spanish in the film. “I let the actresses choose whatever language they felt most comfortable speaking in, so it’s a mix,” Meller said.

Though Desperate Housewives ended its eight-season run in 2012, the storyline of Now En Español is universal, Meller said. “It’s a bit like a soap opera itself: finding love and achieving your dreams while being a working woman.”

Working with her is veteran editor Ondine Rarey (Trading Spaces, Keeping Up With the Kardashians), who is also in the midst of transitioning to acting. “So she’s the perfect editor for this project,” Meller said.