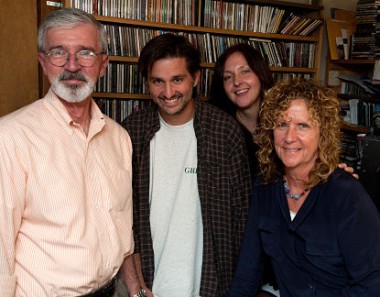 WMVY, the commercial music station on Martha’s Vineyard that lost its flagship frequency 92.7 MHz in February, plans to return to the airwaves as a noncommercial Triple A station.

Under a pending license-transfer agreement, a nonprofit group of staff and supporters who kept the music service going for the past year will buy 88.7 WMEX-FM, a 420-watt signal located in Edgartown, Mass., for an undisclosed amount.

WMVY was displaced from the local airwaves when WBUR acquired the license to 92.7 FM in Tisbury, Mass., extending its Boston-based NPR News service to the Vineyard. Since the transaction excluded WMVY’s studio and equipment, the staff moved quickly to mount a web-based program stream. They were able keep the music playing with $600,000 raised by the friends group within 60 days of going off the air.

“It’s pretty remarkable that, with all of the changes we’ve been through, we’ve been able to stay intact,” said PJ Finn, program director. “In an industry with so much personnel change normally, the staff here really hung in there and fought for the station.”

Rebranded as mvyradio, the music service remains on the air in Newport, R.I., location of WMVY’s translator on 96.5 FM. Rhode Island Public Radio leased its HD2 stream to the friends group, providing a feed to mvyradio’s translator.

After announcing its pending purchase on Nov. 7, the friends launched a $1.5 million capital campaign to cover the transaction as well as the costs of equipment upgrades.

Back on the air

The channel that is to become mvyradio’s new home is a new noncommercial frequency assigned during the FCC’s 2007 open window to Vineyard Public Radio, founded by Dennis Jackson.

Jackson, an engineer by trade, owns another noncommercial station, WJZZ-FM in North Salem, N.Y., and multiple commercial frequencies, including WQQQ-FM in Sharon, Conn., and WRIP-FM, in Windham, N.Y. “I’m a radio geek,” he said.

Jackson planned to launch WMEX as a noncommercial music outlet broadcasting American standards and big band music, at least until another broadcaster offered to buy the frequency. But the station never gained a foothold; its launch was delayed because of zoning issues, and it’s now broadcasting at the FCC’s minimum operating standard.

Friends of MVY contacted Jackson about WMEX shortly after WBUR moved into the market.

“We started talking not long after that, and I didn’t see the benefit of building the format in the area and then turning around and selling it,” Jackson said. “Why set people up for disruption?”

“And, really, no one is in a better position to serve that community,” he added. “I think this deal keeps MVY local and is the highest and best use of the frequency.”

After WMVY’s local broadcast service went off the air, the decision to revive it as a noncommercial station was a no-brainer, Finn said. “It just fits the station so much better. Personality-wise, we were always on the line between noncommercial and commercial.”

So far, mvyradio has made the transition to a listener-supported business model smoothly. The station has been operating on $600,000 raised in its first fundraising drive that started in November 2012, and its marketing reps are offering sponsorships, not ads.

“For so long, we were living year-to-year,” Finn said. “Now, we’ve got a fresh start and we’re trying to look at the bigger picture and be sustainable.”

But MVY will undoubtedly face new financial hurdles in its return to the airwaves. Its old call letters, for example, were picked up by the Electromagnetic Company LLC, in Hartford, Vt., and assigned to 104.3 FM.

By moving to the left of the dial, mvyradio joins a crowded field of pubcasters serving the Cape and Islands. WCAI-FM and two sister stations broadcast to the Cape Islands as a service of Boston’s WGBH, and WBUR is now transmitting on 92.7 under the call letters WBUA. College stations operated by the University of Massachusetts and Cape Cod Community College broadcast from 91.8 Falmouth and 90.7 in West Barnstable, respectively. And, in Provincetown, Lower Cape Communications operates 92.1 WOMR-FM, a noncommercial educational station.

WCAI founder and indie producer Jay Allison welcomed WMVY’s return to the air with a local broadcast service, adding that he doesn’t view mvyradio as a direct competition for WCAI’s listeners.

“Any noncommercial broadcaster would worry that adding another one might tap out the community,” Allison said. “But, in MVY’s case, I think they’re in a unique position.

“They’re very Vineyard-y, and I think people have realized now that it could go away, like a local fish market or pharmacy, if they don’t pony up to support them.”