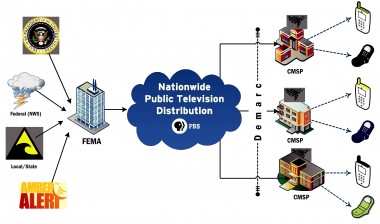 PBS WARN (Warning Alert and Response Network) connected to the Federal Emergency Management Agency’s alert aggregator on Aug. 6, “the last step in the process of putting all of the pieces in place for the system to work,” said Dana Golub, PBS WARN executive director.

The network uses PBS’s interconnection system to create a redundant path for FEMA wireless emergency alert (WEA) messages, 90-character text warnings from government entities such as the National Weather Service, local and state disaster agencies and the White House. The messages alert recipients to specific emergencies in their area and direct them to local media for more information.

“This is a great opportunity for PBS and member stations to fulfill our system’s community-based public service mission,” said PBS President Paula Kerger, “by helping to develop and deploy a new technology that can contribute significantly to public safety.”

The public broadcasting system is one of the few national organizations capable of handling the responsibility, said Joe Tymecki, c.t.o. for Vermont Public Television and chair of the PBS Enterprise Technology Advisory Committee. “Vermont is a great example,” he said. VPT is “the only entity that has over-the-air coverage in close to 100 percent of the state. We’re really the only people who could have done this. And that’s true with many statewide networks.”

The WARN initiative began as part of the 2006 SAFE Port (Security and Accountability for Every Port) Act. A provision in the legislation expanded the national broadcast-based Emergency Alert System to include voluntary participation by cellular mobile service providers, and ordered the FCC to create a backup system through noncommercial television stations.

By the end of 2014, most new mobile devices will be able to receive WEAs, and PBS developed the technical redundancy to guarantee those alerts will arrive on the devices of their intended recipients if Internet service is disrupted.

“Hurricane Sandy and other events have showed us that there are times when the Internet can be severely compromised,” Kerger said, “leaving people out of touch when they are most in need of information. PBS and local public television stations can help cell phone companies and their subscribers stay connected to FEMA in an emergency. This is truly public service broadcasting at its most fundamental and necessary level.”

The FCC, through its Public Safety & Homeland Security Bureau, is overseeing implementation of the overall project.

In 2010, the Association for Public Television Stations helped PBS secure $26.8 million for equipment from the Commerce Department’s National Telecommunications and Information Administration. Another $28.2 million arrived in 2011 to provide secondary supplies of electricity, such as generators and other backup power systems.

The technical system is set up to tap pubTV stations as relays between FEMA, which sends WEAs to local pubcasters, and local commercial mobile service providers (CMSPs), which then forward the alerts to their mobile customers.

“The way we send this message is conceptually simple, though technically difficult,” Golub said.

When WEAs arrive at PBS WARN from FEMA, the messages are automatically reformatted for satellite transmission by an encapsulator. The WARN system also uses a message repetition process called “carouseling” to help ensure reception during severe weather and terrestrial disturbances, such as wind blowing a microwave dish linked to the transmitter site.

“Think of each WEA message on its own horse on a carousel,” Golub said. “When there is enough space in the broadcast stream so that the WEA won’t interfere with the television show, it gets to hop off of the carousel and stream up to the satellite.”

Because PBS WARN is required to provide redundancy to FEMA’s primary WEA transmission system, Golub said, “we need to make sure that there is no single point of failure at any stage of the system.” So the system’s engineers built in two gateways capable of receiving FEMA messages: one at the PBS Satellite Operations Center in Springfield, Va., and another at PBS’s Disaster and Diversity Management Site in Lincoln, Neb.

PBS WARN is designed to carry all messages at all times, Golub said, “because no one can know when a specific link to a specific provider will go down.” Its design prevents any repeats of the same alert.

A complex project with unique challenges

Each station also received a switch that provides redundancy for the WARN system by switching between groomer outputs. Groomers insert the WEA message packets into the broadcast multiplex using a process called “null packet replacement.”

Each message comprises 90 characters of text and a “wrapper” identifying the type of message and geographical location, and takes up just 4 to 5 kilobytes of the 19.39-megabit-per-second broadcast stream fed through the interconnection system, Golub said.

Mobile users can receive three types of vital messages: presidential alerts during a national emergency; warnings of imminent threats to safety or life, such as severe weather; and AMBER Alerts, concerning missing or abducted children.

“Earlier this year,” Golub said, “a WEA about a tornado in Connecticut saved the lives of a camp director, around 30 kids and five counselors. It’s a great feeling to know that we are working on a system that will help to save peoples’ lives.”

But building the system has presented unique challenges. The work crosses multiple industries within the field of telecommunications — phone manufacturers, television stations, cellular service providers — and several federal agencies. It has required ongoing “complex collaboration and communication,” Golub said. “This is on top of the project’s main challenge: The system that will enable stations to fulfill the FCC’s mandate had not been invented when the WARN legislation was created.”

Even as PBS prepares to shift away from satellite distribution for its upcoming Next Generation Interconnection System, PBS WARN will continue.  “Our mandate is to provide a hardened, diverse path for WEA messages,” Golub said. NGIS, now in testing, will use dedicated fiber lines, not the public Internet, she noted. “So that will still offer the diverse path, even if that path doesn’t take it out of our atmosphere. Satellites aren’t the key here, redundancy is.”

The PBS WARN team — four full-time employees based in Crystal City and the Springfield SOC — is also working with the various government agencies to ensure long-term financial sustainability of the project, Golub said. Right now, stations receive five-year support contracts from equipment manufacturers to cover the costs of repair or replacement for all components.

Testing of the system is now underway. “All stations are ready to transmit,” Golub said. “Their systems are in place and in bypass mode. All we need now is the message.”

She expects a launch by spring.