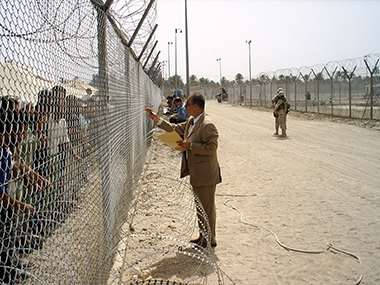 After plumbing the global repercussions of America’s war against terrorism for eight years, this summer documentary filmmaker Laura Poitras helped expose how that war has stripped away the privacy of U.S. citizens.

Poitras, a contributor to PBS’s POV and Independent Lens for more than a decade, was reportedly the first journalist to agree to collaborate with National Security Agency whistleblower Edward Snowden in revealing how the agency has catalogued and archived the digital communications of millions of Americans. Her film projects received funding from the Independent Television Service in postproduction, after she traveled to war zones and terrorism hotspots in pursuit of stories revealing the far-reaching human implications of America’s military and covert actions combating terrorism.

Along the way, she has earned considerable acclaim for her work, including a 2012 MacArthur Foundation “genius grant” and a Courage Under Fire Award from the International Documentary Association, the latter of which is to be presented Dec. 6.

In naming her to its 2012 class of fellows, the MacArthur Foundation praised Poitras’s attention to contemporary social issues and her ability to offer “insight into complex topics with a unique cinematic lyricism.”

This month, her work took a new direction: Poitras has joined a new digital journalism venture to be operated as a for-profit by Glenn Greenwald, a journalist who has both reported on and collaborated with Poitras, and eBay founder Pierre Omidyar.

In June, Greenwald and Poitras teamed up to report for the Guardian on revelations gleaned from classified documents obtained by Snowden. Poitras has since co-authored several news articles for other media outlets, receiving bylines in the New York Times and Der Spiegel, among other publications. She also filmed an interview with Snowden that accompanied the Guardian’s initial coverage of the documents.

According to Greenwald, the only individuals with full access to Snowden’s NSA documents are Poitras and himself.

As her profile has grown within and beyond independent filmmaking, Poitras has found it necessary to move beyond the reach of the U.S. government. She now lives in Berlin and has adopted extraordinary measures to protect her privacy as she works on her next documentary, the conclusion of a thematic trilogy of films about American anti-terrorism policy in the post-9/11 age. The filmmaker did not respond to interview requests from Current.

Poitras began taking steps to protect herself from government surveillance during filming of My Country, My Country, her Oscar-nominated 2006 POV documentary about an Iraqi doctor’s campaign for office in 2005, during his war-torn country’s first democratic election under U.S. occupation.

Between 2005 and 2012, Poitras was detained nearly 40 times by U.S. Customs officers, according to multiple news accounts and her colleagues at ITVS. Through these encounters, she learned that she had been placed on a terror watchlist. An Oct. 10 report by the Committee to Protect Journalists’ Leonard Downie Jr. highlighted her run-ins with U.S. officials as evidence of the Obama administration’s fiercely combative relationship with the press.

“The administration’s war on leaks and other efforts to control information are the most aggressive I’ve seen since the Nixon administration,” Downie wrote. “Greenwald and Poitras worked on his stories and her documentary in [Greenwald’s home in] Brazil, expressing concern about the U.S. and allied governments’ using border security powers to harass and hamper them.”

News coverage of Poitras’s multiple run-ins with government officials — most notably a 2012 report for Salon by Greenwald — prompted Snowden to contact her about the classified documents he planned to leak, according to the New York Times.

“When I first heard about [the NSA story], I felt like she was at the center of one of the biggest stories in recent memory, and that this would be life-changing for her,” said Simon Kilmurry, POV executive director.

Since moving to Berlin in fall 2012, Poitras has limited her travel to the U.S. She guards against surveillance by removing the batteries from her cellphone and working on computers that have never been connected to the Internet, according to the New York Times.

Poitras is working on the final documentary in her post-9/11 trilogy, but has revealed few details about the scope of the film. (Photo: Kris Krüg)

Amid that secrecy, Poitras has remained hard at work on her next documentary, which will incorporate as-yet-unreported information from Snowden’s documents about the NSA’s data-collection practices. Though she has shared few details about the scope of the film, she screened clips from it during an April 2012 appearance at the Whitney Biennial in New York. She also directed a short documentary for the New York Times on another NSA whistleblower, William Binney, and posted a photo of an NSA data-collection facility in Bluffdale, Utah, on the website of her production company, Praxis Films.

Poitras is exceptional among American filmmakers because “she doesn’t make advocacy films and she doesn’t make films that are intended only to speak to people who already agree with her perspective,” said Pat Aufderheide, co-director of the Center for Social Media at American University. “They’re films that are intended to bring a person who may not know anything about a situation, or who might already come with biases against the protagonist, into the story.” Aufderheide has hosted Poitras as a visiting filmmaker and written about My Country, My Country for the academic journal Framework.

Poitras’s colleagues at ITVS and POV are eager to work with her on her new documentary, although ITVS, which provides direct funding to indie filmmakers through several different grant programs, initially turned down Poitras’s requests for production backing for each of the first three films she pitched.

Undaunted by the rejections, Poitras traveled internationally and usually operated as a one-person crew to complete filming of My Country, My Country and The Oath. ITVS later stepped up to help with costs of postproduction.

The filmmaker has yet to approach any pubTV grantmakers about funding her latest project.

A former chef, Poitras took filmmaking classes at the San Francisco Art Institute before moving to New York in 1992 to pursue her passion full time, also studying social and political theory at the New School.

Poitras’s 2003 feature debut, Flag Wars, co-directed with Linda Goode Bryant, examined gentrification in Columbus, Ohio, and earned postproduction funding from ITVS. Poitras’s next two features, My Country, My Country and The Oath, were the first two installments of her post-9/11 trilogy.

The latter follows the lives of two men who were involved in al-Qaeda prior to 9/11: Abu Jandal, a Yemeni cab driver who served as bin Laden’s bodyguard and was detained for seven years by the U.S. military as a terror suspect; and Salim Hamdan, an al-Qaeda member detained at the U.S. prison in Guantanamo Bay, Cuba, who was the first to be tried under the military tribunal system. The Oath debuted on PBS in 2010 as a POV primetime special.

She also directed the experimental short film O’ Say Can You See; produced other works such as 2013 POV entry The Law in These Parts; and edited episodes of WikiLeaks founder Julian Assange’s cable TV talk show The World Tomorrow.

Poitras put herself at great personal risk to complete these projects. She traveled to Iraq for My Country, My Country, and to Yemen several times for The Oath. In both cases, she pursued the films after being rejected for ITVS funding and handled all location shooting herself. She secured funds from other prestigious sources, however, including the Sundance Institute and the Tribeca Film Institute. Additionally, she received a Guggenheim fellowship for The Oath. ITVS later came through with postproduction grants for both documentaries.

ITVS’s decisions on Poitras’s initial requests for funding were largely due to the limitations of the grantmaker’s commissioning process, according to Claire Aguilar, executive content advisor. Poitras applied through its open call, rather than its commissioning process, which is reserved for minority filmmakers and big-name directors like Kirby Dick, whose ITVS-backed 2012 film The Invisible War confronts rape in the U.S. military.

Poitras’s experience with advance funding requests isn’t unusual, according to Aguilar. ITVS often rejects initial funding requests — even from veteran filmmakers — but provides guidance for them to shape their proposals for success in the next funding round.

Poitras has expressed frustrations to her ITVS partners about the difficulties of her work. Aguilar recalled a conversation with the filmmaker during production of The Oath, when she was being repeatedly held by U.S. Customs.

“She was saying, ‘It’s getting harder and harder for me to do this work because I’m getting detained and I’m getting the ninth degree when I enter the U.S.,’” Aguilar said. “But she also knew, with The Oath, that she had material that was strong. It was basically [about] people who were unraveling al-Qaeda operations and the ideology of being a terrorist. And if there’s any guilt by association, she was revealing that.”

The Oath was critically acclaimed prior to its national debut on PBS. It won multiple film festival awards and the Gotham Award for Best Documentary. Post-broadcast, it was nominated as best documentary in the 2011 National Academy of Television Arts & Sciences News & Documentary Emmy Awards.

“It’s a complicated, great film that tells two really compelling human stories and lets you inside of two places you would otherwise never get to  — Yemen and Guantanamo,” Aufderheide said. “You’re going to go to that film and realize that this situation is a lot more complicated than you might have been thinking about it before.”

Despite the secrecy surrounding Poitras’s next film, and her ascension within the world of independent journalism, her colleagues believe that she remains committed to public TV.

“She continues to be a real staunch believer in public media as a way of getting her stories out. Because you just can reach so many people,” Aguilar said.

“If she would send a proposal, we would look at it pretty favorably and probably really consider it for commissioning,” she added.