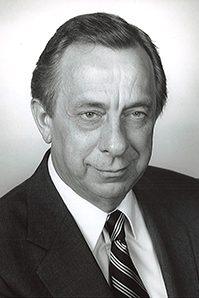 Robert Larson, a mission-driven public broadcaster who helped pioneer techniques for creating television programs and outreach for underserved communities, died Sept. 13 in Kissimmee, Fla., at the age of 83.

Larson, an ordained Presbyterian minister who attended Pittsburgh Theological Seminary in the 1950s with children’s TV icon Fred Rogers, began his pubcasting career in 1964 at WITF in Harrisburg, Pa. He joined the station at its founding as a producer and writer, and rose to become president in 1970. Larson led WITF for nearly two decades, spearheading local and national program initiatives focused on public welfare. He received Emmy nominations for two programs: All About Welfare in 1972, and Closing the Gap in 1975.

But the Detroit native left his biggest mark on pubcasting after he returned to his hometown in 1983 to become g.m. of WTVS-TV, a position he held until his retirement in 1995. In Detroit, Larson created a unique community service model for public TV by creating programs for local urban communities, such as the City Youth Outreach Project.

Larson brought millions of dollars in grant money to the station for his urban outreach efforts, and also started a national movement, as around a dozen other stations joined his Nitty Gritty City Group with the intent of addressing the needs and interests of local urban communities. With other public TV partners, Larson and the Nitty Gritty City Group won CPB backing in the mid-1990s for the National Campaign to Reduce Youth Violence. The initiative combined high-profile PBS programs with station-based activities and a Help-a-thon volunteer recruitment drive that Larson organized.

“His theological background informed everything he did,” said Dan Alpert, senior v.p. of Detroit Public TV, as WTVS is now branded. Larson saw his station as an “urban mission,” he said, and his staff as “urban missionaries.” “One of the things he said was, ‘We’re not just going to drop in on a problem and leave it.’”

Larson would joke that he decided to switch from ministry to public TV after he dreamed of God speaking to him through a burning television antenna, his son Robb told Current. In the telling, “God spoke to him and said, ‘You can reach more people through television,’” Robb said.

Larson expressed his theologically driven commitment to local service in his own words for Current in 1993. In an open letter to then-President Bill Clinton, he wrote: “Placing the power of telecommunications at the disposal of those who work for the welfare of our city is an imperative. If there is a text for this view of public television as a catalytic agent of change, it is to be found in the prophet Jeremiah’s words: ‘Seek the welfare of the city where I have sent you into exile and pray to the Lord on its behalf. For in its welfare you will find your welfare.’”

Larson stepped aside as president of DPTV in 1995 to form his own independent production company, yet he remained involved as president emeritus at the station. He published some books and produced a TV program before disbanding his production company in the mid-2000s because his wife, Shirley Burch Larson, was ill with cancer. He also returned to ministry, preaching every Sunday at a Filipino church in Detroit where he and his wife were two of the only non-Filipino members.

DPTV later shifted away from its mission-focused orientation to earn revenues from pledge program production. At the time, Steve Antoniotti, Larson’s successor as president, told the Detroit News, “It’s impossible for a television station to solve major social issues in a community.”

But Alpert and current DPTV President Rich Homberg said the station remains strongly committed to serving the city of Detroit, a resolve cemented by Larson’s efforts.

Larson is survived by his sons Robb and Peer, and four grandchildren: Adam, Jacob, Clarisse and Lillian. A memorial service will be held Sept. 21 at Osceola Memory Gardens in Kissimmee. The family requests that donations be made to the American Cancer Society.