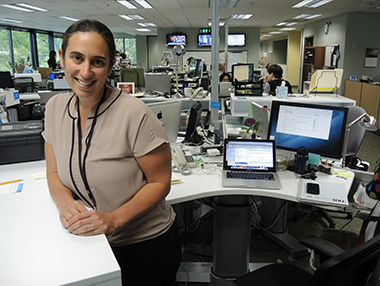 Silverman's job directing content partnership for OPB involves recruiting news organizations to participate in the news network. Once the service is running, she will edit and curate daily coverage to produce a statewide news report. (Photo: OPB)

Silverman’s job directing content partnership for OPB involves recruiting news organizations to participate in the news network. Once the service is running, she will edit and curate daily coverage to produce a statewide news report. (Photo: OPB)

For her first several months as OPB’s director of content partnerships, Julia Silverman has been traversing the state, talking to nearly every daily, weekly, tribal and college newspaper, TV station and blog.

Her goal: Persuade some 40 to 50 news outlets to partner in sharing their content with OPB and its media partners while using shared stories themselves.

“I really regard this as a startup,” said Morgan Holm, OPB’s senior v.p. and chief content officer.

With the big Portland-based daily The Oregonian pulling back on its statewide reporting and daily delivery, and with AP’s state presence diminishing, Holm recalled a newspaper colleague prodding him: “‘OPB was the last statewide media and we’d better step up.’ . . . So I told my boss, we’d better figure out a way to work with newspapers.”

OPB joined with the Oregon Community Foundation, and in 2012 snagged a $300,000 matching grant from the Knight Foundation Community Information Challenge program. OPB and the community foundation succeeded in raising funds to match the grant, and began to build the infrastructure for a collaborative statewide news network.

“We can’t do this on our own,” said Silverman, who is spearheading the collaborations. “We have only four reporters — three in Portland and one in Bend, Ore.”

OPB is a key player in a well-established news partnership with public radio stations in Oregon, Washington and Idaho. The Northwest News Network provides coverage around the region and includes a state capitol correspondent in Salem, Ore. Coverage of environmental and energy issues comes from EarthFix, an OPB-led collaborative established with startup funding from CPB. OPB and its partner stations must secure financial support if EarthFix is to continue in the future.

“We are one of the only media that reaches everywhere — whether you live in Portland or Ontario [Ore.], which is in a different time zone,” Silverman said. “I was just out in eastern Oregon. It was two hours between towns with only sagebrush in between.”

She views her mission as forging relationships not just with editors of the state’s metro papers, but also with those at smaller newspapers that aren’t AP members and may have a great story “but it doesn’t travel.”

Reactions to her proposal for a statewide collaboration vary. “Some people get it right away and it’s an automatic yes,” Silverman said. “Some people ask, ‘What’s in it for me?'”

A lot, if OPB’s plans take hold. Silverman approaches her job in stages, starting with outreach to existing news organizations to persuade them of the benefits of partnering. “Then,” she said, “I will transition to more of a curator/editor.”

In that role, she will sift through partners’ coverage and push out some 10 to 15 stories each day to form the “core of a thoughtful statewide news report — news of public interest, not the latest meth bust.”

That may involve editing, say, a 900-word story into 300 words for space-challenged newspapers. She will also be editing OPB staff content, much of it written for radio, for print publications.

Another task will be adapting partners’ content into radio spots that can be read on the air. Silverman also hopes to develop a corps of newspaper-based reporters around the state who will receive audio training and participate in on-air debriefs.

The project timeline calls for OPB to roll out a website with top news stories from around the state by December.

OPB took a cue from Minnesota Public Radio’s Minnesota Today, which curates and aggregates content from public officials, bloggers, and business and industry experts throughout the state but does not rely on formal media partnerships.

OPB began its efforts before pay walls at Oregon newspapers took off and The Oregonian announced major changes. Now most of the state’s papers charge customers for digital access, although a majority of the pay walls are metered, giving viewers free access to a certain number of articles before charges apply. One chain has a hard pay wall, requiring payment to see anything. “They are among the only ones who said no,” she said.

Asked about the pros and cons of partnering, Steve Forrester, editor and publisher of The Daily Astorian, says, “It’s all pro in my book. We’d be foolish not to.” He’s already been collaborating on regular radio programs with his local community radio station.

OPB’s efforts occur in a rapidly changing landscape for Oregon’s news media. The Oregonian announced in June that it was cutting home delivery to four days a week and selling only street editions the other three days. It laid off nearly 100 of its 650 employees, including as many as 49 in the newsroom, and announced the creation of a new company, the Oregonian Media Group, to “expand news and information products” in Oregon and southwest Washington.

Holm sees similarities between The Oregonian’s moves and the strategies employed by its parent company, Advance Publications Inc., with the New Orleans Times-Picayune and Cleveland Plain Dealer.

“Like many people, I am deeply concerned about the loss of reporting capacity and institutional knowledge that will result from these changes,” he said. “I know OPB can’t singlehandedly fill that gap. But we must continue to meet our public-service obligation through initiatives like this content exchange because it can provide a place for people to find news from all over the state while The Oregonian goes through this period of painful adjustment.”

Some of OPB’s prospective partners are enthusiastic about a statewide news network’s ability to break through their isolation. Others express concern that they don’t have a large enough news hole to publish more stories, but Silverman tells them their online space is unlimited and they can add state and regional tabs.

The biggest pushback, Holm said, is: What is it going to cost me? “I don’t have the answer yet because it all depends on the number of partners.”

For now, Holm said, he is shouldering “a significant commitment.” OPB is picking up the tab for implementation of the Publish2 system of content sharing. [The system] supports connectivity between various partner content management systems and makes it easy to create feeds for different delivery platforms.

Down the road, partners will be asked to pay for the costs of editing and curating. Silverman says it may be as little as $50 a month for a small community paper up to a couple hundred dollars for a larger one. “It’s on me to make it valuable enough,” Silverman said, but also “make it clear this is not a moneymaker for OPB.”

Holm would like to see OPB develop a local-news presence on TV, but for the moment he’s trying to build a place for shared news about statewide issues.

“People do ask us, ‘Is this a replacement for AP?'” Holm said. “I say, ‘For the moment, it’s not.'” But he says he can see a future where many state news outlets could do without AP “and not lose any ground,” although they’d need to find a way to get sports coverage.

As things move forward, Holm is betting a statewide news network will help a lot of news outlets in the state. “If it doesn’t meet a need,” he said, “we shouldn’t do it.”

J-Lab’s study was primarily funded by the Wyncote Foundation, which also supports Current through a separate grant.
This case study, first published by J-Lab at American University, was adapted for print publication in the Aug. 26 edition of Current.
ShareTweet EmailPrint More