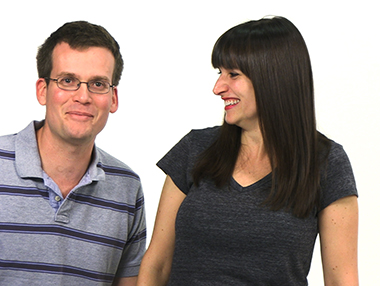 PBS Digital Studios is partnering with John and Sarah Green, a husband-and-wife creative team with a large YouTube following, for a new online program about art that will debut early next year.

Green, an author of young adult fiction whose 2012 novel The Fault in our Stars topped the New York Times bestsellers list, and art curator Sarah Urist Green will produce The Art Assignment, a new weekly show for the PBSDS YouTube channel, challenging viewers to take on art-related projects.

Sarah left her job as curator with the Indianapolis Museum of Art to create and host the web-only show, while John will executive-produce and make frequent guest appearances.

In the series, Sarah Green will profile artists from across the country, each of whom will lay down an art-related challenge to viewers. Fans of the show can then create and upload their responses through YouTube, PBS.org or other social media platforms. In a promotional video posted Sept. 24, the duo described sample challenges such as inviting viewers to create, and then destroy, an original piece of art.

The Greens aren’t strangers to YouTube. John is the creator and co-host of the Vlogbrothers series, which he launched in 2007 with his brother Hank. The show has more than one million subscribers, and is especially popular with teenagers – an audience PBS is keen to reach.

The Green brothers host and produce other shows as well, including Crash Course!, an educational series covering topics in science, history and other subjects. In addition, John Green is a former public radio commentator who has contributed to NPR’s All Things Considered and Chicago’s WBEZ.

“When we got started with Digital Studios, really the impetus was people like John Green and his brother Hank,” said Matt Graham, PBS Digital Studios senior director. The parties had been discussing a potential partnership for more than a year. “We basically said, ‘Hey, we’re fans of your work,’” he said. “I think they saw Digital Studios mature and demonstrate that we were playing by the right set of rules for how to work with creators and create content for the web.”

PBS did not disclose the amount of funding for the program.

“PBS in general has such a strong legacy of arts programming,” said Sarah Green, noting that she is a fan of series such as Art 21. “And then with PBS Digital — I’ve been so enjoying their content and programs.” Online videos are “bridging that gap between YouTube and outlets for Internet video and what PBS is already doing.”

For much of Vlogbrothers, the brothers jokingly referred to Sarah Green as “the Yeti” because she was initially unwilling to appear on camera. But as her public speaking roles increased at the Indianapolis Museum of Art, she became more comfortable with the idea of hosting a show. “I am feeling a little more at ease with social media and with having a public life,” she said.