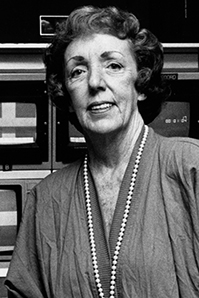 Betty Cope, the founding general manager of Cleveland’s pubTV station and one of the first women to ascend into television broadcast management, died Sept. 14 at her home in Bainbridge, Ohio. She was 87.

Cope started her television career in 1947 as a receptionist with Cleveland commercial station WEWS, but quickly rose through the ranks to become a producer-director.

She played a significant role in the Educational Television Association of Metropolitan Cleveland, which launched broadcast service of WVIZ-TV, one of two Cleveland stations now operating as ideastream.

Cope joined Cleveland’s ETA in 1962 as executive secretary and became program director two years later. When WVIZ went on the air in 1965 as America’s 100th pubTV station and one of the first assigned to a UHF channel, Cope was its first g.m. In 1972, she rose to station president.

In WVIZ’s early years, the station’s studios were located behind a trade school gymnasium. Cope put a wide array of educational programs on-air, including college telecourses in 1975.

“She put the station on the air all around education. That was what she really cared about,” Kent Geist, senior director of development and communications at ideastream, told Current. Cope hired Geist in the 1960s right out of high school as a production crew member. He hasn’t left since.

Cope’s stature as a high-ranking woman in broadcasting made her “one of those early pioneers” Geist said. “It was a man’s world, and for a woman to be heading a major market television station was almost unheard of. And she ran it very well.”

When Cope retired in 1993, she had racked up a host of honors for her work in Cleveland, including the governor’s award from the National Academy of Television Arts and Science and the distinguished service award from the Society of Professional Journalists. She was twice-divorced with no children.

“Betty was a trailblazer throughout her professional life,” Jerry Wareham, president of ideastream, said in a statement. “She built WVIZ from scratch before there was a PBS. The educational and public service work we do today at ideastream simply would not be possible without the remarkable work she did. We are deeply saddened by her death and forever grateful for her life.”