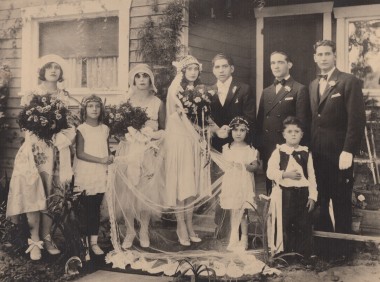 Latino Americans, a six-hour historical documentary debuting on PBS next week, explores notions of identity through stories such as the wedding of Salvador and Lupe Villaseñor of Santa Ana, Calif. Their family is featured in the second episode. (Photo: Victor Villaseñor)

Latino Americans, a six-hour historical documentary debuting on PBS next week, explores notions of identity through stories such as the wedding of Salvador and Lupe Villaseñor of Santa Ana, Calif. Their family is featured in the second episode. (Photo: Victor Villaseñor)

Meant to right what some see as a longtime grievance with public television for overlooking the contributions of Latinos to American history, the series also serves as a vehicle for concerted outreach to Latino viewers, who, at more than 50 million strong, are the country’s largest minority group.

African Americans, Irish Americans, Asian Americans and Jewish Americans have all been subjects of major PBS history programs; decades of struggle for women’s equality were examined last year in Makers. Henry Louis Gates Jr. will revisit the sweep of African-American history for six Tuesdays on PBS, starting with the Oct. 22 debut of The African Americans: Many Rivers to Cross. Italian Americans will get their own history in 2015.

Similar projects on Latino-American history were never able to secure enough funding until Washington station WETA, independent producer Adriana Bosch and Latino Public Broadcasting, in association with the Independent Television Service, put together the financing for Latino Americans. Among the series’ major supporters are the Ford Foundation and the National Endowment for the Humanities. Even with these co-producers and funders backing the show, the project was scaled back from an initially planned eight hours.

Among all the usual creative decisions in documentary filmmaking, producers of Latino Americans wrestled with questions of how to relate the story of Latinos in the U.S. with authenticity while also engaging a broader viewership, producer Adriana Bosch said. (Photo: Rahoul Ghose/PBS)

Jeff Bieber, v.p. of national programming at WETA and shepherd of the project, said fundraising was a three-and-a-half year effort. The $5.4 million budget provided $3.6 million for production and $1.8 million for outreach and engagement. With immigration issues a topic of debate in the country, the series ultimately resonated with foundations, he said, as did its “very robust engagement plan.”

The series team will assist with dozens of station screenings, and a bilingual website will feature viewer-submitted videos about Latino identity as well as guest bloggers discussing their experiences in the U.S.

Last week, artist Jose Torres-Tama wrote about the racial prejudice Latinos encountered in post-Katrina New Orleans. His Sept. 1 post described the “New Confederacy of the South passing Juan Crow laws that redirect their previous vitriol and racial poison towards African Americans towards brown Latinos today.” In other posts, musician and journalist Aurora Flores wrote about the traditions of Puerto Rican cuatro music, and Sherman Jackson recalled breaking in as one of the earliest Latino network-news correspondents.

“The point of the series is to really engage a general public and connect a history to what’s happening today” in the debate over immigration, Bieber said, adding:  “People think the immigration of Latinos is relatively new.”

The production has two premises, Bosch said: That there is such a thing as a Latino identity and that Latinos were “very much a part of American history even before there was a United States.” Bosch, a Cuban-American, produced several presidential biographies and a 2005 biopic of Fidel Castro for American Experience.

“First and foremost, we felt that this was American history,” Bieber said. “How do people come here, [and] why do they come?”

The series includes many individual stories. It starts with Spanish explorers in North America in 1565 and moves on to the U.S. expansion into Southwest territories and the Mexican-American War — a “history of dispossession,” Bosch said. It then examines the waves of immigration that rose in the 1880s and1960s.

With a historical sweep going back 500 years, the first installment of Latino Americans relies on actors and re-creations to depict stories of early settlers, including Apolinaria Lorenzana, an orphan who lived in a Spanish settlement in California in the early 1800s. (Photo: Brett Buchanan Photography)

The third episode is devoted to stories of World War II veterans, including U.S. Marine Guy Gabaldon, a Mexican American, who captured some 1,800 Japanese soldiers and civilians in the Battle of Saipan. His exploits became the basis of the movie Hell to Eternity, with non-Latino actor Jeffrey Hunter in the lead role. Two later episodes of the series chronicle the Chicano identity and the current debate over undocumented immigrants.

The premise that there is a Latino-American identity, separate from the national identities of Mexicans, Cubans, Puerto Ricans and Dominican immigrants and their descendants, is controversial. “There’s always pushback to that concept,” Bosch said. “There’s always a competing view that it’s the national imprint that really is the main identifying DNA of Latinos in the United States.”

Those national identities are also acknowledged in Latino Americans. In her largely Hispanic production team, Latinos represent “as many groups as we could,” Bosch said. They spent considerable energy hashing out how much time to devote to individual stories from each of the major immigrant groups.

That was just part of the complicated balancing act that came on top of the usual documentary choices — broad history versus personal stories, how many re-creations and how many talking heads, Bosch said. “There were issues of, how much do you do not to lose your mainstream, your non-Latino audience? And how much do you owe in terms of your own voice that needs to be in the story?”

Bosch added: “We don’t want to lose one audience because we’re talking to another audience.” Bieber noted that one funder clearly told him that the series should “not preach to the choir” but instead engage all Americans.

Still, producers hope the series will help bring Latino viewers to PBS, which is taking out a paid media campaign to encourage tune-in.

“To hear these stories about Latino World War II vets on public television is an extraordinary moment,” said Maria Hinojosa, the anchor of NPR’s Latino USA and a past anchor on PBS’s Now and Need to Know, singling out just one of the series’ elements.

The World War II stories have been a point of friction for many in the Latino community. Latino groups, including the Congressional Hispanic Caucus, were angered to learn at prescreenings of Ken Burns’s 2007 documentary The War that it didn’t include stories of Latino soldiers and threatened to boycott the 14-hour film.

Public broadcasting executives defended Burns’s right to tell the story as he saw it, but in a compromise, the program was supplemented with material examining the wartime experiences of Hispanic and American Indian veterans.

“There are people who walked away from PBS because of the bad taste in the mouth” around that film, Hinojosa said. Having Latino Americans on PBS, she said, “could be the thing that draws back these viewers.”

She added: “If we are part of one country that means we have to know the narratives of other people.”