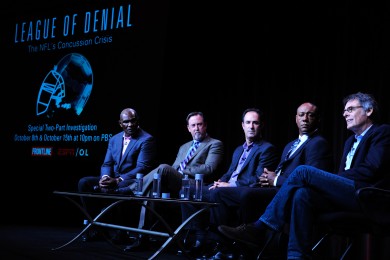 Cable network ESPN on Aug. 22 withdrew from its reporting collaboration with Frontline on an investigative documentary examining the NFL’s allegedly lax response to head injuries among football players.

The two-hour documentary League of Denial: The NFL’s Concussion Crisis will still air on PBS Oct. 8, and Frontline is continuing its partnership with brothers Mark Fainaru-Wada and Steve Fainaru, the ESPN investigative team who have written a book on the issue.

But with ESPN backing away from the project, Frontline loses access to the millions of sports fans who tune regularly to the cable network.

ESPN cited its lack of editorial control as it backed away from the film, but media observers pointed to the sports network’s financial ties to the NFL.

Frontline, which had featured the upcoming program during the Television Critics Association Press Tour, frequently collaborates with other news organizations, and ESPN is the first-ever partner to pull out of an editorial partnership.

ESPN’s timing in choosing to do so was puzzling. Its Outside the Lines, an investigative series, had been co-publishing reports on pro football injuries for 15 months of the partnership. As recently as Aug. 18, Outside the Lines and Frontline jointly reported on football helmets on ESPN.

As per Frontline’s standard practice, the co-production agreement allowed each of the partners to retain editorial control over the program presented on its channel or published on its website.

Before the partnership dissolved, PBS chief programmer Beth Hoppe talked up the co-production, saying it “works for both of us” during an interview at the TCA Summer Press Tour.

“It gives ESPN the gravitas in journalism they need, because they don’t have that credibility on their own,” Hoppe told Current. “And it gives us a sports connection and promotion machine that we need.”

Others had seen great potential in the journalistic partnership. “When I heard ESPN would be teaming up with Frontline, I thought, ‘Wow, this is fabulous,’” said Kelly McBride, journalism ethicist with the nonprofit Poynter Institute, who also was lead writer for a Poynter ombudsman project with the sportscaster from March 2011 to October 2012. “This will remove all doubt that the audience might have that ESPN was not capable of holding the NFL accountable because they were partners in broadcasting the games.”

The focus of the documentary — life-altering injuries suffered by professional football players that have led to multiple lawsuits against the NFL — has been covered by other news organizations, but the Frontline and ESPN relationship would promote awareness of the issue among a much broader audience.

ESPN has a financial stake in the popularity of professional football: It pays the league more than $1 billion annually to telecast Monday Night Football. Yet ESPN spokesperson Josh Krulewitz told the Washington Post that the network’s withdrawal was unrelated to its business agreements with the NFL.

“We had no editorial control” over the Frontline documentary, Krulewitz told the newspaper, “and weren’t comfortable lending our branding to it.”

But ESPN’s discomfort with the documentary doesn’t surprise McBride, who observed the network’s corporate culture from the inside during the Poynter ombudsman project.

“Their explanation makes perfect sense — not that it’s a good one,” McBride said. “Top executives at ESPN made it very clear, repeatedly, that they do not surprise their partners,” such as the NFL, she said. By not having control over Frontline’s broadcast content, ESPN couldn’t abide by that pledge.

‘The NFL has not been cooperative’

The NFL has been under pressure to recognize the problem of brain injuries among its players for several years, including from Congress, which convened oversight hearings on the issue in 2009.

ESPN’s Outside the Lines aired a five-part series “The Concussion Crisis” in May 2012, and six months later Frontline and ESPN announced their collaboration to bring the research of Mark Fainaru-Wada and Steve Fainaru to television viewers. Their book from publisher Crown Archetype, League of Denial: The NFL, Concussions and the Battle for Truth, hits bookstores in October, as the two-part documentary premieres.

Last December, Frontline launched its Concussion Watch online database, a weekly roundup of players listed on the NFL injury report with either a concussion or head injury. By then, Outside the Lines had begun posting more investigative pieces on the topic. Aronson presented a trailer from the documentary during the PBS Annual Meeting in May, and early this month PBS screened it for television critics in Los Angeles.

During the Aug. 6 press tour session, filmmaker Michael Kirk talked about the NFL’s reaction to the project.

“The NFL has not been cooperative, in the way that the Defense Department wasn’t cooperative with us, in the way that the Central Intelligence Agency isn’t cooperative,” he told critics. “Big institutions often don’t open their doors to the kind of hard look it was our intention to take. . . . They, obviously, don’t want to talk about it, and it’s too bad because [the issue of brain injuries] is a huge, huge problem.”

Dwayne Bray, sports news editor in ESPN’s enterprise reporting unit who also appeared at TCA, said he didn’t see this story as “ESPN going up against the NFL.”

“I think one of the interesting things about ESPN is it’s sort of a bifurcated company,” Bray said during the session. “You do have the business partners on one side, but you also have the editorial production side. And our journalism has been very strong on this issue, and so strong that we partner with Frontline.”

ESPN “made a conscious decision when we were presented with this opportunity to literally get in bed with Frontline,” Bray said. “We’ve had other nonprofits, universities that have asked us to partner with them. We’ve never done a partnership.”

But the TCA session reportedly raised eyebrows among the top executives at ESPN, according to the New York Times, which cited unnamed sources with direct knowledge of the situation in an Aug. 23 report on the editorial partnership’s sudden end. (An online report from the ESPN ombudsman on Aug. 25 confirmed that.) From that moment forward, the Times sources said, ESPN’s role in the reporting “came under intense pressure” by the NFL.

Aronson first learned of ESPN’s reservations Aug. 16, when Bray and Vince Doria, ESPN s.v.p. and news director, asked her to remove the network’s logos from Frontline’s website and promos. They cited concerns over trademark issues, she said. At that point, “they still agreed to the collaborative language, and we were still partners.”

Three days later, ESPN asked Frontline to delete all collaborative language from the website, press materials and film. Bray and Doria made the request, Aronson said, but “it didn’t appear to be their decision.”

Frontline tried diligently to save the relationship, Aronson said. “Until Thursday [Aug. 22], we went back and forth, trying to salvage the partnership,” she said. “Both editorial sides were trying very hard. But by Thursday, it was abundantly clear that it was over.”

Despite the abrupt and puzzling demise of the ESPN partnership, Aronson remains committed to building on Frontline’s collaborative-news model. She recently secured funding that will allow her to hire staff to help manage the series’ many editorial relationships.

“I’m as optimistic as ever about news organizations working together,” she said. “This is an unusual situation; for 15 months our editorial counterparts were the best of partners. This is not going to change the way we work.”

With reporting assistance from Barry Garron in Los Angeles.
Questions, comments, tips? sefton@current.org
This article, updating a previous post, was first published in Current Aug. 26, 2013. The cutline was corrected from the print edition, which juxtaposed the names of ESPN’s Dwayne Bray and former NFL player Harry Carson.
ShareTweet EmailPrint More