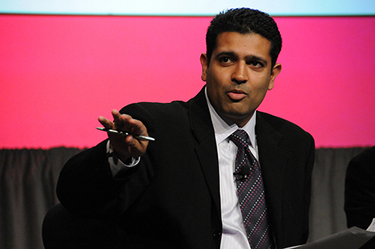 PBS is reconfiguring its lineup of weekend news programs, backing an expansion of the NewsHour and giving late-night interviewer Charlie Rose a new slot in its Friday-night public affairs block.

PBS NewsHour Weekend, a 30-minute Saturday and Sunday broadcast to be anchored by PBS NewsHour correspondent Hari Sreenivasan and produced by New York’s WNET, will debut September 7. PBS is suggesting that stations air the 30-minute show between 5:00 p.m. and 8:00 p.m. It will have the same carriage designation as the weekday NewsHour.

Charlie Rose—The Week comes into the schedule next month as a replacement for Need to Know, the weekly newsmagazine that PBS canceled after a three-year run. The show will start off repackaging timely interviews from Rose’s late-night broadcast and work in new material in the months after its July 19 debut. It will be paired with Washington Week and feed on Fridays at 8:30 p.m.

The announcement of NewsHour Weekend, under discussion for months, came amid signs that the NewsHour flagship, produced by MacNeil/Lehrer Productions at WETA in Washington, D.C., is struggling financially. As a cost-cutting move, NewsHour executives announced June 10 that 10 staff members will be laid off and the show’s offices in Denver and San Francisco will be shuttered as of July 1. And last week, the New York Times reported that the NewsHour had received cash infusions totaling at least $3 million to keep the show going.

Neither Beth Hoppe, PBS chief program executive, nor Sreenivasan refuted the Times account during interviews, but both sought to position the weekend expansion as an entirely separate program initiative.

“The idea for NewsHour Weekend had been coming for a long time before any recent financial crisis,” Hoppe said. “We think funders and foundations will be more inclined to be supportive of a news operation that is there seven days a week,” she said.

Sreenivasan will anchor the weekend NewsHour from Tisch WNET Studios at New York City’s Lincoln Center. Marc Rosenwasser, who served as Need to Know’s executive producer, will serve in the same capacity for the new show.

Sreenivasan joined the weekday NewsHour in 2009 as a correspondent and as director of digital platforms. The idea of establishing a weekend presence for the show always made sense to him, he said.

One of the lessons Hoppe carries away from the demise of Need to Know, a show that was positioned as a new approach to Friday-night news programming when it debuted in 2010, is the difficulty of launching a new program in the crowded television news environment. She said Charlie Rose—The Week won’t have that problem.

“Everybody knows Charlie Rose,” she said. “He is one of the best — if not the best — of the interviewers on television.”

As production ramps up, Rose’s producers will develop and introduce new features to supplement the interviews repurposed from his late-night broadcast. Among the segments under consideration are a week-in-review feature and also a preview of stories expected to drive the news cycle in the week ahead.

During a June 19 PBS board meeting, President Paula Kerger described another role for Rose in his new primetime slot — serving as a bridge between PBS’s Friday public affairs block and the arts programming that follows on many stations’ schedules.

“Charlie is beautifully able to bring those pieces together,” Kerger said.