Director Fred Barzyk began his career at Boston’s WGBH, experimenting with television and the emerging form of video.

He produced dramas for iconic series NET Playhouse and American Playhouse, as well as a cult-hit sci-fi thriller for PBS, The Lathe of Heaven. From there, his cutting-edge documentaries, dramas and educational programs ran on HBO, NBC, ABC and CBS. He directed an array of stars the likes of Morgan Freeman, Christian Slater, Dan Aykroyd, Rosie Perez, Matt Dillon, Claire Danes and Lily Tomlin. 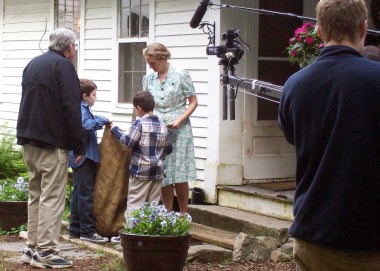 Barzyk, left, directs the volunteer cast of Treasure Hunt, the second scripted drama in a trilogy he created for Chelmsford TeleMedia, a public access channel in Massachusetts.

Now, the director who won Peabody and Venice Film awards is asking for $4,000 on the crowd-funding website Kickstarter to produce the final short film of his drama trilogy on death. It’s set to air on a far different outlet than those that previously showed the works of his professional career: Chelmsford TeleMedia, the public access channel in a Massachusetts town about 25 miles northwest of Boston.

Barzyk, who says he never retired from WGBH, he just lost interest in its slate of productions, is having fun — a lot of fun.

He brags that he persuaded TeleMedia’s programmers to run the opening installment of the trilogy, The Journey, his 2011 tribute to Rod Serling of Twilight Zone fame, one Saturday in May, from 9 a.m. to 9 p.m. Or, as he says, “over and over and over and over.”

The Kickstarter campaign backs filming of The Waiting Room, a tale of seven fictional characters who come to realize that they don’t actually exist. As with the two previous films, everyone involved in the production — the cast, crew, composer, musicians, technicians, prop wranglers, set dressers — are volunteers, many retirees. The first two installments had been funded by the Chelmsford Cultural Council, TeleMedia and Barzyk himself, but new backing was needed to green-light the closing drama.

If the Kickstarter campaign meets its goal, Barzyk says, part of the funding will allow him to stage a dramatic closing shot involving the release of “1,000 black balloons filled with helium” at the Nashua Municipal Airport in nearby New Hampshire.

But the biggest budget items cover the cost of gas to transport the actors to town, and food for everyone participating in the production.

“He feeds us well,” says Stephen Mann, the cameraman on Barzyk’s first two films. It was Mann who helped Barzyk set up the Kickstarter campaign; Barzyk had never heard of the crowd-funding site until Mann suggested that he try it.

As he writes in an email, Barzyk views the project with a sense of nostalgia: “An Old Timer tries to create the Early Days of ETV!!!!!”

He began working for the Boston pubcaster in 1958, just three years after it went on the air; a massive fire there in 1961 destroyed some of his early pieces. By 1968 he was heading up the station’s experimental unit, later called the New Television Workshop.

The workshop created video art before the genre even existed, and its projects were fueled by “the freedom to do what could be done only by a TV station just finding out what it could really do,” he says. Among his innovative productions was “the first double-channel broadcast,” which presented a single story through simultaneous broadcasts on both of WGBH’s TV channels. One showed comedians Bob Elliott and Ray Goulding appearing to walk between TV sets tuned to channels 2 and 44, trying to find their scripts.

In 1979, he directed The Lathe of Heaven for WNET’s Television Laboratory, a critically acclaimed, surrealistic science fiction film that drew a 10 rating in New York and an 8 in Chicago, according to Nielsen. Twenty years later, its still-rabid fan base persuaded WNET to digitally remaster and repackage the film with additional material for rebroadcast on pubTV stations (Current, May 1, 2000). “I can’t tell you how many people tell me how important that film was to them when they watched as teenagers,” Barzyk says.

Even Barzyk’s mainstream work embodied that early, edgy spirit of public television: He executive-produced Puzzlemania, a live, two-hour, interactive children’s program from New York’s WNYC-TV in 1987 and ’88. He was executive producer and director of Destinos, a 56-episode drama-based Spanish language telecourse that ran on PBS from 1988–92, receiving six academic and production awards; it remains a top-selling Annenberg Media learning series. In 1994, he produced and directed Breast Care Test, hosted by Jane Pauley, which showed women how to examine their bodies for cancer. And The Ryan Interview, an Arthur Miller play starring Ashley Judd that he directed, was the first high-definition drama to run on PBS, in August 2000.

Retrospectives of his work ran in 1997 at the deCordova Sculpture Park and Museum in Lincoln, Mass., and in 2000 at the Haggerty Museum of Art at his alma mater, Marquette University, in his hometown of Milwaukee.

Barzyk remained active with WGBH until 2001. “I didn’t really retire,” he says, “I just wasn’t interested in the shows they were doing anymore.”

Although Barzyk had lived in Chelmsford since 1971, town leaders “didn’t know who I was,” he says, “and I liked that.”

But by 2004, they discovered that a television pioneer lived in their midst and approached Barzyk about working at their public access television station, located in the basement of Parker Middle School. “I walked up to the school, rang the bell, signed in and had to work my way through all these kids to get to the studio.” 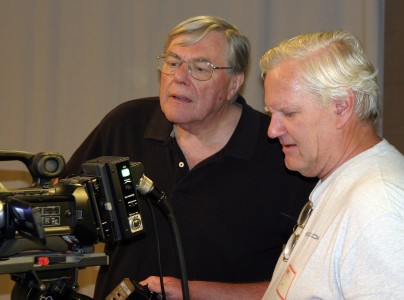 Barzyk, left, with cameraman Stephen Mann, a former pubcaster at KTEH in San Jose, Calif. “I learn something every time I work with him,” Mann says of Barzyk.

He discovered a subterranean treasure trove of TV gear. “High-def equipment, Final Cut Pro — I could do more shows than at WGBH.” Barzyk started out by producing a behind-the-scenes documentary on the town’s big Independence Day parade. He shot features on the senior center and restaurants. “Finally, I said, ‘Hell, I want to do drama.’”

And so he did. Treasure Hunt, the second short film in the series, premiered in May at the Chelmsford Center for the Arts. In it a soldier returns from World War II and gives local kids a treasure map that leads them to toys. “He disappears, and then they discover he’s already dead,” Barzyk says. “That one was written by a guy across the street from me.”

That’s the magic behind Barzyk’s work with TeleMedia, says Mann, his cameraman. “It’s all pretty much just people from town. Out in the field, it’s not unusual to see 12 or 18 of them, with more behind the scenes.”

Mann says Barzyk’s deep belief that art belongs to the people springs from his many years in public broadcasting. “Nobody actually owns the piece,” Mann says. “Fred grew up professionally at PBS, and ‘public’ is their main emphasis.”

Mann also worked in the system, at KTEH in San Jose, Calif., now part of KQED, some 20 years ago. He runs his own company, MannMade Digital Video, from the nearby town of Westford.

Collaborating with Barzyk “is certainly not what I thought it would be,” Mann adds. “For somebody with his resume, I expected a no-nonsense attitude, someone who wouldn’t tolerate mistakes. It’s exactly the opposite. I’m constantly amazed at how he overlooks screw-ups by the crew — and that happens often, with all the untrained volunteers.”

As Pete Pedulla, a staff producer at TeleMedia, says, “Most volunteers we have to train, but here was one who could train us, in a way.”

Barzyk loves the creative process. “What I have is total freedom,” he says. “And I have all the equipment I need. Most of the volunteers are retired, so I have to make sure they don’t have heart attacks — I can’t push them too hard. And volunteer actors, just like when I started at WGBH.”

Barzyk, Mann and all the volunteers plan to shoot The Waiting Room one weekend in September. The characters “are coming to the end of their fictional lives. They’re all in a waiting room. They all realize they’re not people; they only exist as characters. They eventually go out to catch a plane to God knows where.”

Matthew Scott, general manager of TeleMedia, says the film will most likely premiere on the big screen at the arts center; several hundred townfolk turned out for debuts of the previous installments.

Barzyk is already excited about the trilogy’s closing scene. “Steve built a helicopter camera, and it will take off and fly up into the clouds” as the cast and crew and the volunteers, all dressed in black, release the black helium balloons, he says.

That shot is characteristic of Barzyk’s style, Mann notes. “He loves to end movies with the whole crew in the picture.”