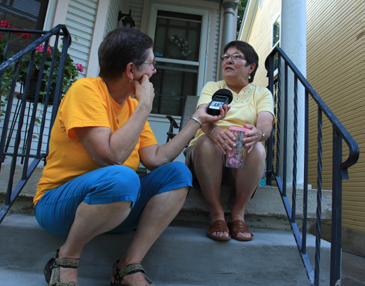 Filmmaker Julia Reichert interviews Carol Coffey, one of the participants in "ReInvention Stories." The Localore-backed multimedia project look at how residents of the industrial city in southwestern Ohio are recovering from the recession. (Photo: Community Media Productions)

The recession has come down especially hard on the manufacturing-heavy city of Dayton, Ohio, burdening its residents and prompting Forbes magazine to rank it among the country’s “fastest-dying cities” in 2008.

This provides the backdrop for ReInvention Stories, a multimedia Localore project that brought together the Association of Independents in Radio, a local NPR station, and a pair of Academy Award–nominated veteran documentary filmmakers.

With startup funding from AIR, WYSO in Yellow Springs, Ohio, and filmmakers Julia Reichert and Steven Bognar spent four months walking the streets of Dayton neighborhoods finding stories. After 70 interviews, seven people’s stories were selected to illustrate the city’s struggle to come back from the recession.

Filmmaker Julia Reichert interviews Carol Coffey, one of the participants in “ReInvention Stories.” The Localore-backed multimedia project looked at how residents of the industrial city in southwestern Ohio are recovering from the recession. (Photo: Community Media Productions)

“When we started this, we really didn’t know the answer to the question of whether or not Dayton would come back,” Reichert said. “At that point, all of the major corporations were going, and the question was, ‘What would we be as a city?’ So it turned out that reinvention was just the right question for the time.”

“The answer is, ‘yes, Dayton is coming back,’ and there is a lot of energy to reinvent coming from a lot of places,” Reichert added. “This project is like taking a snapshot at a turning point in our city’s life.”

Earlier this spring producers received additional funding to continue the production for another year or two.

WYSO g.m. Neenah Ellis said the ReInvention project has been a “true collaboration” and has turned out just as she hoped. Learning about Localore immediately sparked Ellis’ interest, and she knew just who to reach out to participate.

“I knew it was a chance for a station like ours to engage local media artists to take the station to the next level in terms of multimedia production,” Ellis said. “They live nearby, so I just went down the street, knocked on their door and said, ‘We should do this.’”

Reichert and Bognar, who have worked mainly in film, knew that incorporating radio would be a challenge. “One of the first things we asked was, ‘Where do you put the pictures if it’s radio?’” Reichert says. “But at the same time, we wanted to build on our strengths but also do something different, which this allowed us to do.”

Reichert and Bognar collaborated on the 2009 HBO documentary The Last Truck: Closing of a GM Plant, an Oscar-nominated look at the closing of the assembly plant in Moraine, Ohio, where 2,500 workers and 200 management staff were laid off. Their 2006 film, A Lion in the House, was featured on PBS’s Independent Lens series and was nominated for a 2007 Independent Spirit Award for best documentary.

Reichert has been nominated for two other Academy Awards for best feature documentary. Four of Bognar’s documentaries have screened at the Sundance Film Festival, and his film Personal Belongings aired on PBS’s POV.

The filmmakers and WYSO quickly agreed on the idea of reinvention. Dayton, a city 20 miles southwest of the village of Yellow Springs, was hammered with plant closings and high unemployment, bringing to a close its days as a manufacturing powerhouse.

In addition to a series of weekly radio features, ReInvention Stories includes an interactive website developed in collaboration with interactive producers Kara Oehler and Lindsey Wagner of Zeega, the public media startup that contributed to several Localore projects.

The website tells the stories of seven Dayton residents in an interactive “movie” that’s split into three “acts”: “Beginning – Who Was I?”; “Middle – What Happened?”; and “End – Who Am I Now?” Navigation bars at the top and bottom of the screen allow web viewers to sample different stories or change the order in which they are presented.

One of the stories focuses on Holly, who recalls losing both her husband and her job as a traveling saleswoman of specialty footwear within four months. Suddenly finding herself a single mother with three kids and no company car or health benefits available, she decided to open her own store, selling footwear and orthotics.

In another story, Jeremy decides to leave his construction job to follow his dream of starting a disc-golf supply store. By the second act, Jeremy has moved his store to a larger location, expanded his inventory and worries more about expanding too quickly than staying afloat.

“As heretical as it might sound coming from filmmakers, we learned by doing this how radio and audio have an intimacy that you don’t get with film,” Bognar said. “We knew the power of video, but the intimacy you can get with an isolated voice on audio is very powerful.”

Reichert and Bognar are adapting some interviews that weren’t incorporated into the main project as radio shorts for WYSO. All stories are featured on an interactive map designed by Zeega: By clicking on points on the map, viewers can view videos of neighborhood, historic sites or “happenings.”

ReInvention Stories will continue for at least another year and possibly two. The filmmakers received $80,000 in the John D. and Catherine T. MacArthur Foundation’s latest grants round for documentary film projects.

“We think it’s an ongoing story that we’re going to be able to tell for at least a few more years,” Ellis said. “There are a lot of stories out there.”