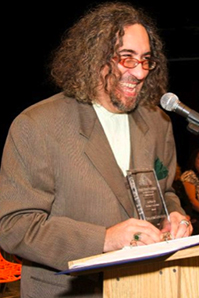 Ibrahim Gonzalez, a longtime producer and on-air personality at the Pacifica network’s WBAI-FM in New York, died in his sleep June 3. He was 57.

Gonzalez joined WBAI in 1990. During his time with the station, he hosted and produced programs including In the Moment, Radio Libre! and Wake Up Call. A prominent figure in both the Latino and Muslim New York communities, Gonzalez often advocated for increased Latino-oriented on-air programming. He was known as the “Mambo Dervish” for the conga skills he displayed during his frequent musical performances.

“Ibrahim brought lots of excitement and positive challenges to my life with his views, ideas, inspiration and always positive outlook at the future of WBAI,” Berthold Reimers, the station’s g.m., posted on WBAI’s memorial page for Gonzalez. Station staff and listeners have flooded the page with condolences since his death.

Gonzalez is survived by his wife, Janet Norquist-Gonzalez, as well as four brothers, five children and eleven grandchildren.

One thought on “Ibrahim Gonzalez, WBAI personality and producer, dies at 57”