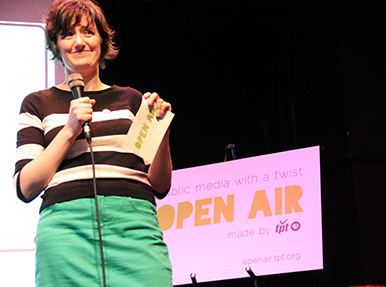 Andi McDaniel, manager of the new Open Air initiative from Twin Cities Public Television, welcomes the crowd to its first event, “Red, White & Brew: Let’s Drink to the Constitution!” The May 8 event at the Amsterdam Bar & Hall in downtown St. Paul was a collaboration with the Theater of Public Policy improv comedy group. (Photo: TPT)

One such event is a bar night to discuss the U.S. Constitution, inspired by PBS’s miniseries Constitution USA. The first event was held May 8, and the second will take place May 22.

“It’s about creating new content, but it’s also about spinning existing content in a fresh way,” Andi McDaniel, project leader for the initiative, told Current. McDaniel is currently the only TPT employee working on Open Air full-time, though the station will soon hire a producer and an engagement coordinator. An unofficial advisory board for the project includes seven TPT employees under 40 years of age.

Andi McDaniel, manager of the new Open Air initiative from Twin Cities Public Television, welcomes the crowd to its first event, “Red, White & Brew: Let’s Drink to the Constitution!” The May 8 event at the Amsterdam Bar & Hall in downtown St. Paul was a collaboration with the Theater of Public Policy improv comedy group. (Photo: TPT)

Open Air does not officially target a particular demographic, but McDaniel makes no secret of the fact that TPT needs to increase its reach among twenty- and thirtysomethings.

A research fellow at TPT who recently completed a year-long study of millennial audiences recommended that TPT approach younger adults with playfulness, a sense of authenticity and an open developmental process.

Additionally, a TPT strategic plan developed three years ago set goals to expand the station’s reach to millennial audiences as well the over-50 crowd and young children. Progress toward the latter two goals came with the launch of Next Avenue, an online magazine aimed at the older cohort, and an expansion of the station’s family and education services department.

“We’re just trying to make some baby arguments here that we can actually get traction with something like this,” McDaniel said about launching Open Air.

New programs to be produced include TV Takeover, a two-hour show that will air once in November and then monthly from January to May 2014. Each show will spotlight local artists, animators and filmmakers, and will be curated by a different Minnesota artist. NEA provided $75,000 to support the program.

TPT will also partner with PBS Digital Studios on the original web series Are You MN Enough? — “an exploration of what it means to be a Minnesotan,” according to McDaniel. The show received a $10,000 Digital Entrepreneurs grant from PBS Digital Studios and will appear on the channel’s YouTube page in August.

The episodes, each two to three minutes in length, will be posted weekly for 10 weeks, spotlighting topics such as Minnesota “hot dishes” and the state’s large population of Somali immigrants. TPT will launch a crowdfunding campaign for the web series.

Open Air’s initial content offerings will be modest quantitatively, McDaniel acknowledged. “We are starting out small and as a start-up, essentially,” she said. “It’s got that entrepreneurial energy, for better and worse.”