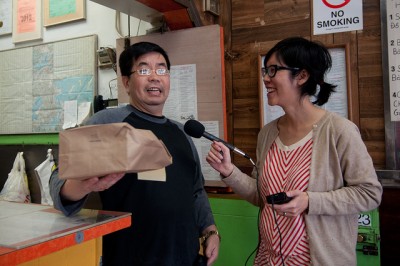 Val Wang's Planet Takeout explores the role that Chinese takeout restaurants have in their neighborhoods. She and producer Kelly Creedon visited over 50 Bostonian restaurants to tell the stories of their owners and customers. (Photo: Kelly Creedon)

Val Wang’s Planet Takeout explores the role that Chinese takeout restaurants have in their neighborhoods. She and producer Kelly Creedon visited more than 50 Bostonian restaurants to tell the stories of their owners and customers. (Photo: Kelly Creedon)

Writer and documentarian Val Wang became fascinated with Chinese takeouts 10 years ago, when she relocated to Brooklyn, N.Y., after living abroad in China.

She noticed that restaurants offering Chinese cuisine as fast food were in every neighborhood, yet she refused to visit them because to her they seemed inauthentic. When she finally tried one, she discovered not only good food, but the many stories that owners, workers and customers were willing to share.

The experience inspired her to dream up a multimedia project documenting takeout restaurants and the stories to be discovered in them. The idea stayed with Wang for years — until 2010, when she applied for and received funding from the Association of Independents in Radio’s Localore initiative. AIR played matchmaker in pairing Wang with WGBH in Boston and Zeega, the team of artists, documentarians and web designers working to build a new platform for creating and sharing multimedia stories in digital interactive formats.

Localore’s focus on local storytelling was a good fit for Wang’s conception of Planet Takeout, she explained. “[Chinese takeouts] can tell the stories of these neighborhoods,” said Wang. “They became the lens through which you can tell the stories.”

The production consisted of three elements: an immersive, experimental website with audiovisual content; five radio stories broadcast on Boston’s WGBH-FM; and a crowdsourcing project inviting web users and culinary adventurers to contribute their own stories via social media sites.

Although immersive media is a new concept for public media production, in the case of Planet Takeout the process began with traditional documentary filmmaking techniques. Over nine months, Wang and producer Kelly Creedon visited some 50 takeouts in the greater Boston area and roughly the same number in communities outside of Boston.

The Planet Takeout website was designed to emulate the experiences of customers who walk into these neighborhood restaurants to place an order, as well as of the employees working behind the counter. Upon landing on the website, visitors encounter streaming video shot from the public side of the counter. Customers move in and out of the frame while cooks work in the back. The idea, explained Wang, is for visitors to feel like they’re at the restaurant.

Web users can navigate through the site in a number of ways: by clicking on icons that appear on screen during streaming video, pointing them to different stories; by browsing through a Chinese takeout menu that lists story collections instead of multiple varieties of fried rice; or through a mapping feature that displays each restaurant by its geographical location.

The overall effect of the site is a random exploration of vignettes conveying a sense of place about each restaurant and the people who work and eat there. The cinema verité–style videography lends a feeling of intimacy to stories that can be experienced in a non-linear way. Users may hear a first-person account of a restaurant owner who is working hard to learn English, or how the window in Yum Yum Restaurant came to be broken.

Wang collaborated with web developer team Zeega to create an immersive experience in which users can participate. (Photo: Kelly Creedon)

Defining the website’s design was an iterative process, one that unfolded through a series of conversations with the Zeega team while production was underway. Wang credits Lindsey Wagner, former Zeega director of projects and user experience, for translating “all of our ravings into wireframes . . . . We were all committed to making a pretty out-there experimental site that would challenge the viewer a little bit,” she explained.

Creedon acknowledges that the nontraditional format of the website may make it of limited interest to the general public. She sees its appeal to specialized audiences — devotees of Chinese takeouts and web users interested in immersive interactive media.

“I think it plays really well to people who are very curious, are into explorations and have good Internet connections,” she said.

Planet Takeout was also designed as a platform for users to contribute their own content. Users can upload photos, videos and sound related to Chinese takeout restaurants through Flickr, YouTube, SoundCloud, Facebook and email. Among 150 user-submitted media pieces, 36 were audio stories uploaded to SoundCloud. Users also shared about 25 photos via Facebook and Instagram.

After the website launched in October 2012, Wang and Creedon worked hard to promote participatory elements of the documentary project. They circulated flyers, approached customers inside and outside of takeouts, campaigned on social media and spoke at public events. They also distributed 2000 custom-made fortune cookies containing information about the website at events and takeouts.

They also promoted online participation by introducing a gaming element — a scavenger hunt challenging visitors of planettakeout.org to photograph items typically found in local takeouts: an altar, a lucky pig or cat, a gumball machine or a fortune cookie slip.

“One thing we found was that there was already a community of people taking photographs of takeouts. There were other people that had that fascination,” said Wang. By tapping into this community, Planet Takeout received contributions from places far beyond Boston, including the U.K.

Although Localore’s funding for the project has run out, Wang and Creedon plan to keep the website running with contributions from people who are as fascinated by Chinese takeouts as they are.

“It’s pretty easy for us to continue at a low level. The traditional documentary part is over, but we want to get more people to participate. Depending on the funding, we’ll determine how big it will be,” said Wang.