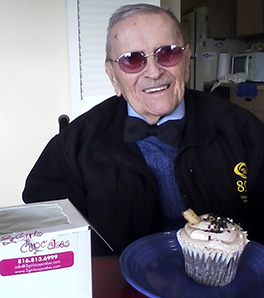 Walt Bodine, a broadcaster who helmed a signature local talk show on KCUR in Kansas City, Mo., for nearly three decades, died March 24 at the age of 92.

Bodine began his radio broadcasting career in 1940 and remained on the air in some capacity — working as a reporter, producer and talk show host — for the better part of the next 72 years. In 1986 he took his popular call-in program, The Walt Bodine Show, to pubradio station KCUR, and remained there until his retirement in April 2012. Kansas City residents knew him as “Walt,” and could immediately identify his catchphrase, “What do you say to that?”

“He always said the public radio audience was intelligent and informed,” KCUR special correspondent and former news director Laura Ziegler told Current. “Radio was his first and, I’d say, truest medium. He engaged its intimacy and what it left to the imagination. He had a masterful ability to know what people wanted to hear and to create images with his words.”

In addition to the radio, Bodine hosted around-town segments for the Kansas City ABC affiliate and wrote several books on his life in broadcasting, including What Do You Say to That? and My Times, My Town. In 2005, he received the Harry S. Truman Community Service Award — fitting for a man who once interviewed Truman himself.

In 1996, Patty Cahill, then-g.m. of KCUR, learned the hard way how much Kansas City loved Bodine after an attempt to cancel his show backfired, according to the Kansas City Star. KCUR leaders were concerned about a decline in the program’s quality and in Bodine’s health. Cahill, who retired from KCUR last year but continues to serve the field as chair of the CPB Board, described the decision as “not entirely mine or entirely the station’s.” After an outcry from listeners, KCUR reinstated the show, and Bodine remained on the air another 16 years.

“Walt Bodine was, like the other journalists of his generation, focused on getting to the truth and separating the wheat from the chaff as quickly and efficiently as possible,” said Charles Ferruzza, who co-hosted an occasional show segment featuring food critics. “When I was agonizing about leaving my former job at a struggling newspaper, weighing all the pros and cons, ad nauseam, I called Walt. He said: ‘Just go in and quit tomorrow. That’s it, that’s my advice.’ I did and never looked back. He really was a legend.”

A degenerative eye disease left Bodine legally blind for much of his life. He donated his body for scientific research, in part to advance the study of the disease.