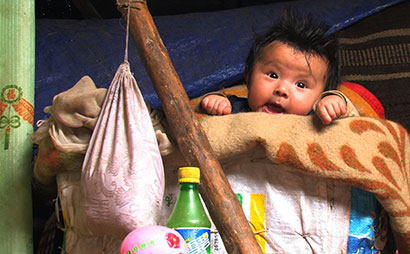 A Tibetan baby relaxes in her crib in the documentary “Summer Pasture,” a look at nomadic herders. The Independent Lens film won a Peabody for PBS. (Photo: Nelson Walker)

A Tibetan baby relaxes in her crib in the documentary “Summer Pasture,” a look at nomadic herders. The Independent Lens film won a Peabody for PBS. (Photo: Nelson Walker)

In the 72nd annual George Foster Peabody Awards announced March 27, PBS won recognition for two programs:   “Summer Pasture,” a documentary about nomadic Tibetan herders that was broadcast on Independent Lens, and  Why Poverty?, a  series about income inequality produced by Steps International that included eight feature-length docs plus short films.

In addition, 56 Up, the latest edition of Michael Apted’s“Up” Series of documentaries from ITV Studios tracking the lives of a group of British citizens, received an Institutional Peabody. It will air on P.O.V. in the fall.

NPR’s reporting on Syria won a Peabody, with correspondents Kelly McEvers and Deborah Amos lauded for “finding ways to get deep into Syria even after their official visas were revoked . . . [and delivering] detailed reportage, often from dangerous locations.” “Teen Contender,” a Radio Diaries segment for NPR’s All Things Considered about the quest for Olympic gold by 16-year-old boxer Claressa Shields, was also recognized. Another winner was “What Happened at Dos Erres,” a This American Life segment produced in cooperation with ProPublica that chronicled the personal story of a child who survived the 1982 massacre of civilians during the Guatemalan civil war.

New York’s WNYC received one award for The Leonard Lopate Show — “New York’s most revered radio forum for exploring the arts, cultural affairs and the public life of the city,” according to the judges. And WNYC’s Studio 360, a co-production of WNYC and PRI, won for “Inside the National Recording Registry,” a series of “micro-documentaries” explaining why various recordings were inducted into the Library of Congress registry. San Francisco-based Ben Manilla Productions created the series, which started as a regular feature on NPR’s All Things Considered and migrated to Studio 360 in 2009, according to a news release from Media Mechanics, a consultancy in which Manilla is a partner. The Peabody-winning entries were broadcast in 2011 and 2012.

Presented since 1941 and administered by the Grady College of Journalism and Mass Communication at the University of Georgia, the Peabody Awards recognize distinguished achievement and meritorious service by broadcasters, cable networks, webcasters, producing organizations and individuals. This year’s awards will be presented May 20 in New York.

Michael Apted’s 56 Up will be presented on PBS by P.O.V., not Independent Lens, as erroneously reported in an earlier version of this article.
ShareTweet EmailPrint More