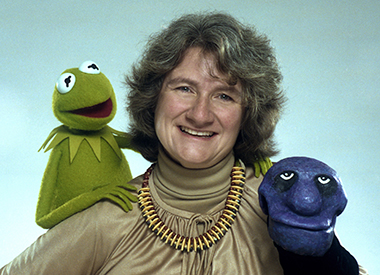 Jane Nebel Henson, a puppeteer and philanthropist who was the widow of Jim Henson and founder of The Jim Henson Legacy, died in her Connecticut home April 2 after a long battle with cancer. She was 79.

She first met her future husband in a puppetry class at the University of Maryland and became his creative and business partner in building the blockbuster Muppets franchise. The couple married in 1959 and legally separated in 1986 but remained close until his death in 1990 from untreated pneumonia. In 1993, Jane established the Jim Henson Legacy, which manages Henson’s film, television and technology archives and “is dedicated to preserving and perpetuating Jim Henson’s contributions to the worlds of puppetry” and other artistic pursuits.

Jane Henson played an important role in the development and production of PBS’s Sesame Street, produced by Children’s Television Workshop with puppet characters created by Jim Henson. In addition to playing various non-speaking Muppets on the show, Jane Henson hired several of the program’s notable “Muppeteers,” including Steve Whitmire (who performed as Kermit the Frog and Ernie, among other characters, after the death of Jim Henson, their original Muppeteer). She also toured with the Sesame Street Live production.

The Jim Henson Company created its own children’s shows for PBS over the years, including Dinosaur Train and Sid the Science Kid.

“We are saddened by the loss of our friend Jane Henson,” Sesame Workshop President H. Mel Ming said in a statement. “Jane’s dedication to the art of puppetry was unparalleled and her support of Sesame Street unsurpassed. Our condolences go out to the Henson family. Jane will be sorely missed.”

She is survived by the couple’s five children: Lisa (now c.e.o. of the Jim Henson Company), Cheryl, Brian, John and Heather.

The Jim Henson Company asks that donations in Jane’s name be made to the Center for Puppetry Arts, the Jim Henson Foundation for the support of puppetry and the Puppetry Conference at the Eugene O’Neill Memorial Theatre Centre.

An earlier version of this article was first published on Current.org, April 2, 2013.
Send obituary notices to lapin@current.org
ShareTweet EmailPrint More