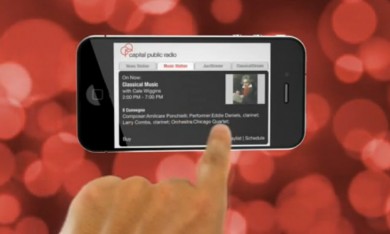 A growing number of public radio stations can now be found on mobile devices, their signature icons wedged between Angry Birds and Google Maps.

They’re the stations that have elected to sink money into creating their own apps, delivering audio streams, on-demand programs and other features to listeners who want a one-stop spot on their iPhone, Kindle or Android device for station content.

To meet their needs, several vendors have gotten into the business of app development for stations over the past few years as apps have grown in popularity:

A notable absence in the field is NPR Digital Services, which has opted to focus on making stations’ websites mobile-friendly instead of investing in app development and requiring the same investment from stations. It took that approach in response to patterns in usage of NPR’s own website and apps, as well as other trends in web traffic.

“We haven’t dismissed the notion of working on apps,” says Bob Kempf, v.p., “but we wanted to respond to where the audience is and give the best possible experience that we could.”

Though users of mobile devices may prefer browsers over apps, at least for some purposes, station execs and others see benefits to developing station-branded apps. They allow broadcasters to send updates and notifications to users, for example, and give stations visibility in the Apple App Store and Google Play, where they can be discovered by searches. And once on a device, an app can help reinforce a listener’s habit of tuning in.

“Your brand is on their device — they’re going right to you,” says Al Gibes, director of digital content at Capital Public Radio in Sacramento, Calif. “It’s a shortcut to the information they want most.”

Apps behind in news viewing

Some data suggest that on mobile devices, apps come in second to browsers. As of April 2012, NPR.org drew twice as many visitors on mobile than all of the network’s apps combined. For reading news, about 60 percent of smartphone and tablet users mainly use browsers, according to an October 2012 Pew Research Center Project for Excellence in Journalism study, while 23 percent of users get news mainly from apps. (Not all public radio apps necessarily qualify as news apps, since some deliver music streams and other non-news programming.)

App users are more engaged, however, reporting that they’re more likely to check headlines and read in-depth articles in their apps.

A 2012 Pew Research Center for the People and the Press study found that 45 percent of mobile Internet users have downloaded a news app — one-fourth of all Americans. App users tend to be younger, wealthier and more educated.

A public radio listener is quite likely to have downloaded at least one app of any kind, according to a Public Radio Technology Survey conducted last year by Jacobs Media and the Public Radio Program Directors Association. Ninety-one percent of listeners surveyed had downloaded an app, with 65 percent having downloaded a radio app.

“You can see where the usage curve is going,” says Paul Jacobs, Jacobs Media’s g.m.

The growth in use of smartphones inspired Jacobs’ consultancy to get into the app business in 2008. It’s since developed 800 apps, and about 40 of those were for clients in public radio. JacAPPS builds apps from a customizable template at a cost of about $1,800 to as much as $10,000, with additional monthly maintenance payments.

Not long after launching jacAPPS, Jacobs started talking with Ford execs about their SYNC AppLink system, which allows drivers to control apps by voice commands while driving. When Ford first rolled out AppLink, it demonstrated it with Pandora, Jacobs says. He asked about using it with individual radio station apps, but Ford said they weren’t ready.

JacAPPS kept in touch, however, and last year Ford asked it to be the lead development house for creating apps that work with AppLink. So far, the announcement has prompted more interest among commercial stations, “which makes no sense,” Jacobs says. “Public radio stations have this wealth of content.”

AppLink and similar interfaces are the future of in-car radio listening, he says: “The two dials and five buttons aren’t going to exist in a year or two.” Ford has offered AppLink on an open-source basis to other manufacturers, so if it appears in other cars, apps could be compatible in those as well.

NPR introduced its own SYNC app last year, prompting concern among some station executives that the network was exploiting yet another way to bypass stations and reach listeners directly. Jacobs sees Pandora, iHeartRadio and other apps as competitors as well.

Listener Interactive has developed apps for 55 pubradio outlets, according to Baker. The developer produces webinars for stations to share their experiences with apps.

“Once you get that icon on the phone, that’s prime real estate,” Jacobs says.

Among developers of apps for public radio, jacAPPS is trailing behind Listener Interactive, which got into app development at about the same time.

The company started as a vendor of Radio Bookmark, an electronic key fob that listeners could use to “bookmark” stories they heard on public radio. Plugging the fob into a computer would help them find web pages that corresponded to the audio stories.

After the company transferred the concept to smartphones, adding audio streams seemed like a natural next step, and developing apps came next. The developer has since created apps for 55 stations and has been adding at least two a month, says Chris Baker, v.p. of business development. It charges an annual fee of $2,000 to $10,000 depending on the station’s size, with most coming in under $5,000.

One advantage of the company’s app-development strategy, Baker says, is that it brings stations together for webinars and helps them share their experiences with apps. “If a station comes along with an idea, everybody gets it,” Baker says. “. . . We’re way ahead of everybody else in terms of the number of stations we work with, just because of that model.”

The company’s focus on public media was attractive to Capital Public Radio when it was looking to create an app, says Gibes. The broadcaster launched its app in November 2011.

“With the adoption of smartphones, we could see the other media were moving into the app world, and we figured we just needed to be there,” Gibes says. “It proved to be very successful.”

So far 15,000 users have installed Capital Public Radio’s app. Downloads for Apple devices lead the pack, with the iPhone in first place, though the iPad is catching up, Gibes says.

The station has seen bumps during holiday seasons when listeners receive new phones and tablets as gifts. Capital Public Radio has also promoted the app on air, and it recently created a 30-second TV spot for broadcast on local cable channels and on DirecTV.

Stations looking to create an app have yet another option for a partner: Public Radio Exchange, which created its first app for a station, Boston’s WBUR, in 2009. It has since developed several dozen more.

PRX’s apps cost stations a base fee of $8,500 and an annual service fee of $5,000. They allow for more customization than other vendors’ apps, says Jake Shapiro, executive director.

In addition to creating apps for stations, PRX has also worked on high-profile apps for public radio programs, including Radiolab, This American Life and The Moth. And it developed a standout app for KCRW Music Mine. The iPad-only app helps users explore and discover new music selected by KCRW DJs.

Shapiro sees room for station-focused apps to branch off in new directions similar to that pioneered by Music Mine, fulfilling purposes more specific than just gathering content under a station’s brand.

“Stations first want to make sure they have a basic app reflecting their core identity,” he says. “But once that’s done, they’re freed to think in a more focused way about something that leverages what they do, but isn’t trying to be all they are.”

“It’s a place to be able to take risks and try new things, and not treat it as just a new distribution outlet,” says Matt MacDonald, technical projects director for PRX. But taking that approach requires more thought and money, he acknowledges.

Jacobs of jacApps agrees. “Users don’t want apps just stuffed with everything,” he says. “They want apps that do exactly what they want.”

Stations and app developers are also exploring ways to help stations make money from apps. Some apps now allow for underwriting announcements that play before a stream launches, as well as opportunities for banner ads.

Facilitating donations is trickier, as filling out a donation form on a smartphone can be tedious and challenging. JacApps has built a mobile-friendly web donation page into its app, while Listener Interactive has been experimenting with generating emails to users that will send them to a donation form when they next use a desktop or laptop computer. The developer might also try out audio messages that encourage donations when a listener pauses and resumes a stream, accompanied by an on-screen prompt.

PRX’s Shapiro has waged a public campaign against Apple, which has refused to allow donations through its App Store. That’s a “huge missed opportunity,” Shapiro says. Another option is to prompt users to donate via text messages, but that limits donors to $10 gifts, below what most stations prefer.

Monetizing apps could help stations get a bigger return on the investment they sink into developing them. But is the investment worth it in the first place? That’s the question that prompted NPR Digital Services to focus on mobile-friendly web design rather than app development. So far about 80 sites are using a mobile-friendly design scheme provided by Digital Services.

Mobile-optimized websites work on all devices, while apps cost more to create and require adapting and maintenance for multiple platforms such as iOS, Android and Kindles. “You need to work hard for effective app distribution,” wrote Steve Mulder, NPR Digital Services’ director of user experience and analytics, and Keith Hopper, director of product strategy and development, in an April 2012 Digital Services blog post comparing mobile web and app strategies. “Mobile web distribution takes care of itself.”

“While apps can still be successful at engaging your already loyal audience, we believe mobile web is the biggest opportunity for stations to grow new online audience,” they continued. “Creating a mobile-optimized site can deliver more audience for less cost.”

Another plus: Referrals from social media drive traffic to web pages, but “social referrals aren’t going to get you inside a native app,” says NPR’s Bob Kempf.

One thought on “Looking to get in listeners’ pockets”