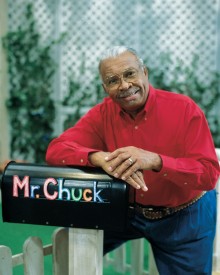 Scruggs on the set of Hello, Mr. Chuck! at WKNO in Memphis. (Photo: WKNO)

Charles Scruggs, known to Memphis children for his appearances as “Mr. Chuck” on WKNO Public Television for nearly two decades, died Jan. 18. He was 80.

“He was a leader and a role model for all ages,” Michael LaBonia, WKNO president, said in a statement. “When Fred Rogers visited us in 1997, he took me aside and said that what Mr. Chuck was doing for our community was ‘remarkable.’”

Scruggs on the set of Hello Mr. Chuck! at WKNO in Memphis. (Photo: WKNO)

Scruggs arrived at WKNO in 1993 and became host of Hello Mr. Chuck!, which ran on several pubTV stations in Tennessee and the Northeast. The program received a Silver Honor Award from Parents’ Choice in 1999, and won a regional Emmy in 2000.

Scruggs also was the first black g.m. of WDIA-AM in Memphis, the first all-black-programming radio station in the nation, and inducted into the Black Broadcasters Hall of Fame in 1997. He co-founded the National Civil Rights Museum, securing a personal loan to help purchase the Lorraine Motel in Memphis, where the Rev. Martin Luther King Jr. was assassinated in 1968.

LaBonia recalled an event in 2000 at that museum, which presented South African President Nelson Mandela with its International Freedom Award. “After the speech, the children were encouraged to go up and meet President Mandela,” he said. “However, most of the children flocked toward Mr. Chuck, who gently urged them to visit with President Mandela.”

Scruggs was born in Chattanooga, Tenn., and at age 16 began hosting his first regular radio program, Wake up with Bugs, on WDXB, a local country and western station. He studied business administration at Tennessee A & I State College, and communications at the University of Cincinnati.