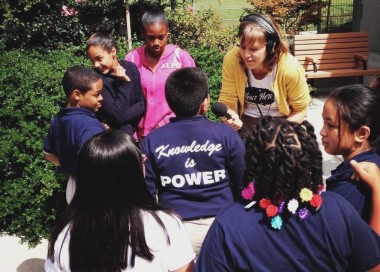 Last summer, in a quiet room at the 81st Avenue Branch Library in East Oakland, Calif., fifth-grader Lita Hernandez sat down with producers of KALW’s hyperlocal media project Hear Here and spoke into a shotgun microphone attached to their Marantz 661 recorder.

The adolescent spoke freely on the chosen theme of “eat,” and about how her older cousin’s gift for creating baked goods that make people happy inspired her to dream of becoming both a chef and a pharmacist. Lita asked aloud, “What if I could make people happy, too, with my food?”

Hear Here launched last spring as an experiment testing new ways to collect and distribute hyperlocal stories. About twice a month on both sides of the San Francisco Bay, KALW producers popped into local libraries and set up an impromptu studio. There, instead of asking questions interview-style, they let the participants speak for themselves on a given theme, such as “home,” “eat,” “work” and “play.”

It is a project born in the newsroom of San Francisco’s KALW, conceptualized by reporter/producer Erica Mu and news director Holly Kernan, and funded as a co-production of the Association of Independents in Radio’s Localore initiative. Mu built on the concept of the “pop-up” model, inspired by restaurants and shops that exist on a temporary basis in a borrowed or shared space for a short period of time. This allows them to keep their overhead expenses low while building a new base of customers.

“Pop-up stores and restaurants were (and still are) hugely popular in San Francisco and Oakland, because they take a space and make it multifunctional, surprising and refreshing,” Mu said via email.

Hear Here stories air during KALW’s locally produced newscast Crosscurrents and broadcasts of Morning Edition and All Things Considered. The stories are also distributed online via SoundCloud and through an interactive map on Hear Here’s website.

Mu and her small team have interviewed more than 100 people and produced about 45 stories to date. “Let me tell you: It’s extremely challenging managing both production and postproduction at the same time,” Mu wrote. “It really is like drinking from a firehose — a firehose of precious stories.”

They’ve also hosted live storytelling events, such as a huge December show at the Oakland Museum of California, and appeared with their huge custom-built story and sound installation at community events such as LitCrawl, a night of neighborhood-wide readings in the Mission District.

But it’s been the library appearances that have kept Hear Here moving smoothly along. Within a few months of the project’s launch, Mu and team noticed that their relationships with library staff members had developed into something special.

“We were seeing that our library partnerships were really paying off because we were investing a lotof time and effort into trust-building,” said Mu.

To reach certain communities, Hear Here’s producers knew they needed liaisons if they were to achieve the levels of engagement that they sought. They recognized that the staffs of neighborhood libraries had built reservoirs of trust within their communities that would help facilitate Hear Here’s work.

“We built a relationship with the community,” said Anthony Propernick, a senior library assistant who has a background in community studies and works with at-risk youth. “Then we bring in programs based on their needs.”

The 81st Avenue Branch Library, where Lita Hernandez made her first recording for radio broadcast, is in an East Oakland neighborhood known for being “a very difficult and violent place,” Propernick said. “Lots of people, library staff included, don’t like coming here.”

The modern 14,000–square-foot building, flanked by two elementary schools, sits just down the street from warehouses enclosed by barbed wire and homes with barred windows.

The library serves the two elementary schools as well as the public. Its programs run the gamut from art classes and job clubs to digital-media production classes for young adults.

Lita’s story aired last summer on KALW’s Crosscurrents, and the library’s staff members and the Hear Here team were moved by it. But they weren’t the only ones it struck a chord with.

Her story reached Dr. Sharon Youmans, who happened to be a chef and associate professor of clinical pharmacy, associate dean for diversity and vice chair for educational affairs at the University of California at San Francisco.

“I found her storytelling to be quite amusing and I related to her cooking experiences as I had some of the same at the age of 10,” Youmans wrote in an email. “At UCSF we are trying to find ways to reach out to the community and encourage students to consider the health professions as a career choice. She was in my ‘backyard’ and I could not resist.”

Youmans contacted KALW, and Mu arranged for her to meet Lita and her family, which led to a tour of the college and a commitment to stay in touch.

The experience of participating in Hear Here was transformational for Lita Hernandez. “She jumped over the digital divide,” said volunteer producer Anne Huang, who helped cultivate the relationships with libraries.

Lita “met someone in the community she would not normally have contact with. When you have a great partnership, it increases the chances of wonderful things happening,” Huang said.

“The radio project showed a different perspective of East Oakland,” Propernick said. “The producers got it right.”

That kind of success and involvement is central to Hear Here’s mission to reach new audiences not previously touched by public media.

“This particular community is looking for someone who’s going to invest real time into listening to them and staying long term,” said Mu. “So we’re taking this relationship seriously as we think about the second year of Hear Here.”

Hear Here’s Localore grant ran out March 1, but KALW is committed to supporting the project for another year as it seeks more grant funding to keep it going.

In its second year, Mu said, Hear Here will focus on East Oakland and San Francisco’s Visitacion Valley “because we felt intuitively that these are rich, rich neighborhoods that normally don’t have a voice in the media.”

“Public radio can be much more than it has been,” said Mu. “We should be extending our ears to the public and not the other way around.”

Mu recently moved on from Hear Here and relocated to Los Angeles, and Audrey Dilling has succeeded her as the project’s lead producer. Though regretful about losing Mu, Dilling wrote, “We’ve refined the project into something that is sustainable and will continue to make change in the community and KALW.”

Meanwhile, Hear Here will stage its next live event April 12 at the Victoria Theatre in San Francisco.

Dawn Morgan, a graduate student in American University’s film and video program, recently completed a School of Communication Dean’s Internship with Current. Prior to pursuing her master’s degree, she produced news and music programs for WMNF, a community radio station in Tampa, Fla.
This article was first published in Current, March 11, 2013.
ShareTweet EmailPrint More