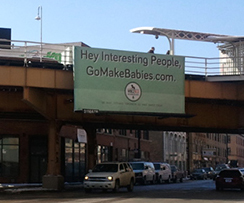 WBEZ's new ad campaign encourages young people around the city to "go make babies," and pairs them up with fellow "interesting people" for purposes of procreation. (Photo courtesy of WBEZ)

Dubbed the “2032 Membership Drive,” the station’s newest citywide marketing blitz encourages young “interesting people” to “make babies” who will grow up listening to public radio. The ads appear on billboards and buses; a Facebook app created for the campaign has a matchmaking feature to help curious listeners connect.

WBEZ’s new ad campaign encourages young people around the city to “go make babies,” and pairs them up with fellow “interesting people” for purposes of procreation. (Photo: WBEZ)

Listeners who are already parents, or expect to be soon, can post photos of their babies or “baby bumps” online and receive a WBEZ onesie.

The campaign’s plug for procreation may be tongue-in-cheek, but its underlying message is not, according to Torey Malatia, WBEZ c.e.o.: The station is having a hard time attracting listeners and donors younger than 25. Though adults 25-to-30 years old have joined the WBEZ’s listenership fold in increasing numbers, 18-to-25 year olds don’t recognize the WBEZ brand, much less listen. Brand recognition is especially weak among young minorities.

To combat this, the campaign is built around interactivity and the pursuit of romance, rather than around the station itself. Ads instruct people to visit GoMakeBabies.com, which sends them to a Facebook app of the same name. The app plays matchmaker by asking a series of The Dating Game–style questions and presenting a curated selection of WBEZ content, tailored by the user’s responses to game questions. (For example, the app recommends clips from the music program Sound Opinions to a user indicating interest in a TV show about “the lyrics of Dr. Dre.”) Those who complete the questionnaire receive links to Facebook profiles of potentially “interesting” mates. The app advises, “We’ve found some other interesting people that you might be interested in hooking up with for coffee or procreation. Whatever. No pressure.”

Daniel Ash, WBEZ v.p. of strategic communications, told Current the station’s marketing team will analyze the data that the app collects about participants, but won’t email or contact them via Facebook — unless a respondent chooses to “like” WBEZ’s Facebook page.

The $400,000 ad campaign is WBEZ’s first large-scale marketing effort since 2004, and was created by local ad agency Xi° Chicago to reach young potential listeners who have had little-to-no connection with public media since their childhoods.

“These are folks who are unaware of public media,” Ash said about the target audience. “They don’t know WBEZ exists. But they listen to radio. They consume news and information on the radio. They behave in many ways like our current audience: They vote, they volunteer, they’re involved in community-based activities.”

In focus-group testing of the campaign with young adults, those in the target audience who were put off by the campaign’s frank tagline were intrigued enough by the message to want to learn more about the station, Ash said.

“Across the board — even those who were offended by the campaign — they responded, ‘Yes, I would go check out that station, because I can’t believe they would ask me to do such a thing,’” Ash said.

If WBEZ is performing poorly among younger listeners, it’s not for lack of trying. The home of This American Life and Wait, Wait… Don’t Tell Me! is known for irreverent viral pledge drive campaigns, such as one reimagining popular NPR programs with cats and another altering the lyrics to John Lennon’s “Imagine” to solicit donations.

Additionally, in 2007 the station’s parent company, Chicago Public Media, launched a separate broadcast channel and multimedia website, dubbed Vocalo, in a concerted effort to reach young minority communities. The experimental service paired an FM station in Chesterton, Ind., with a website that built on user-generated material. But Vocalo failed to engage its target audience and its content strategy was revamped several times. It’s now programming a more traditional format of music and information.

WBEZ’s marketing team did evaluate the campaign’s direct appeal to young adults with some caution; the possibility that the new listeners drawn to WBEZ would find the station’s programming unappealing wasn’t lost on them. But Malatia trusts that young “interesting people” will stick around. He’s using the new campaign to light a fire under his staff to focus more on young listeners.

“Unless your promotion indicates that you really are trying to change, people won’t expect a different sound when they come in,” Malatia said. “As we put this out, we are putting pressure on ourselves to be sure that we’re producing relevant material for the audience we’re attempting to attract, and the core audience that we serve currently.”

Though the campaign is scheduled to end within two months, the “interesting people” moniker will stick around as part of WBEZ’s ongoing branding effort, and Ash is hoping to launch future “constant evergreen campaigns” based around it.