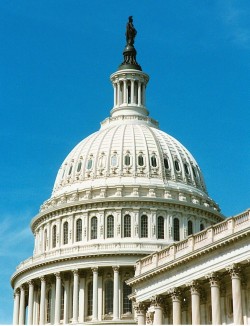 CPB is figuring out how best to handle Community Service Grant payments to stations, as Congress and the White House work to resolve differences over spending in fiscal 2013 and beyond. (Photo: Wikimedia Commons)

With the increasing likelihood that budget cuts once thought to be too big to take effect will slash spending across the federal government March 1, CPB is planning how to handle its payments to stations in the event that its $445 million 2013 appropriation is altered again.

CPB is figuring out how best to handle Community Service Grant payments to stations, as Congress and the White House work to resolve differences over spending in fiscal 2013 and beyond. (Photo: Wikimedia Commons)

To prepare for sequestration, CPB last November reserved 10 percent of its appropriation — $44.5 million — before calculating Community Service Grants and sending the first batch of checks to stations. The corporation front-loaded the payments so each station received 70 percent of its grant, a financial cushion amid the uncertainties wrought by the budget stalemate. CPB plans to begin issuing checks for the remaining 30 percent next month.

The tricky part is figuring out how to handle payments after that, as Congress and the White House work to resolve their differences over spending in fiscal 2013 and beyond.

The 2013 sequestration, required under the Budget Control Act of 2011, will impose $85.4 billion in automatic spending cuts across the federal government. As part of the budget deal that congressional leaders and the White House negotiated in late December, Congress voted to postpone sequestration until March 1. It also provided a $24 billion down payment on the required reductions by approving the American Taxpayer Relief Act of 2012, the compromise that made Bush-era tax cuts permanent.

During the CPB Board’s Feb. 18 meeting, the corporation’s lead representative to the Hill reported that an across-the-board sequestration cuts appear “almost certain.”

“The temperature is chilly on Capitol Hill, which reflects the great distance between the parties,” Michael Levy, executive v.p., corporate and public affairs, told directors during the telephonic meeting from CPB headquarters in Washington, D.C. “Both sides are working as hard as they can to find an advantage in the public-relations battle over who is to blame” over the budget standoff.

It’s possible that some portion of CPB’s initial $445 appropriation could be restored. CPB’s decision to set aside 10 percent of its FY13 appropriation was part of an agreement negotiated last November with the Office of Management and Budget. The $44.5 million was reserved in a CPB account as 90-day certificates of deposit, with interest earned to be invested in radio and television programming.

Station CSGs have been calculated on an estimated remaining appropriation of $405 million. Under CPB’s funding formula, about $263 million of that amount was directed to the CSG program.

Last November, OMB told CPB officials that its sequestration would reduce the appropriation by 8.2 percent. Recent recalculations of the sequester by the nonprofit Center on Budget and Policy Priorities and the Congressional Budget Office, a federal agency that provides financial data to lawmakers, estimated that cuts to CPB would be less — 5.1 percent or 5.3 percent, respectively, according to Levy.

“However, it is important to remember that the Office of Management and Budget will provide CPB and other government agencies with the actual final sequester figure,” Levy told Current. CPB expects to know the final amount on or around March 1.

But CPB funding could also be reduced under another spending measure with a looming deadline — the Continuing Resolution that has allowed the federal government to continue operating in the absence of a budget agreement. The CR expires March 27. On or before that date, Congress must either approve a 2013 budget that President Obama agrees to sign, or pass another CR. Either way, the legislation could contain additional cuts to CPB. And, most significantly for public stations, the CR deadline corresponds with CPB’s usual timetable for issuing CSGs to stations.

CPB management has decided to proceed with the payment amounts as calculated earlier. “Since we may not know what our final appropriation will be when we make these funds available,” CPB President Pat Harrison told directors, “we will calculate the second CSG payment on the basis of a $405 million appropriation.”

If the appropriation is more, CPB will make a third CSG payment to stations; if less, it can reduce the first CSG in FY14.

“We believe this approach allows us to get funds to stations in the most financially responsible way,” Harrison said.