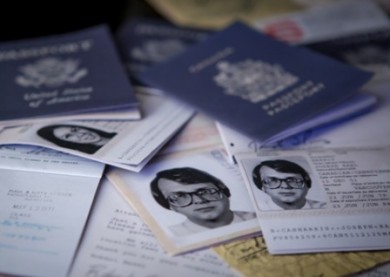 The filmmakers of Escape from Iran: The Hollywood Option, which first told the story that plays out in the current hit movie Argo, created piles of fake documents for their Canadian production, which is available to public broadcasters through American Public Television. (Photo: Chris Triffo/Partners in Motion)

The storyline of a Canadian film coming to public TV stations this month has all the trappings of a gripping yarn: intrigue, spies, an exotic locale, terrified hostages, Hollywood glamour and the triumph of circumventing a whole bunch of bad guys to pull off a daring rescue.

If the plot sounds like that of Argo — director Ben Affleck’s suspenseful feature film dramatizing the real story of a 1979 operation to rescue Americans trapped in Tehran — it should.

Escape from Iran: The Hollywood Option, a Canadian film syndicated by American Public Television, is a documentary that was the first to tell the story of the elaborate CIA mission. Directed by Chris Triffo of Vancouver-based Partners in Motion, it debuted on History TV in Canada in 2004, and APT picked up distribution rights to U.S. public TV stations a year later. Twenty-one public TV stations broadcast the film before rights expired in 2008.

Now APT is re-releasing the film for local pubTV broadcasts starting Feb. 15, just nine days before the Academy Award ceremonies, where Argo will be vying for seven Oscars. The feature film has already won two Golden Globes this awards season, for drama and director.

The decision to buy rights for another U.S. run of Escape from Iran was tricky for Boston-based APT, according to top programming execs. As soon as movie theaters began screening preview trailers for Argo last year, APT execs began pondering whether to pursue a re-release; they opted to wait and see how the feature film did at the box office.

“I knew we had this documentary,” said Nelsa Gidney, syndication program executive. “The problem was acting too early: Until the film came out, we didn’t know — it could have been terrible.”

In any given year, APT comes across numerous opportunities to pick up programs tied to hyped-up Hollywood films that could land “with a thud,” said Eric Luskin, APT’s v.p. of Premium Service and syndication. Public TV programmers are “a little wary of falling into that sort of situation. We watch that carefully.”

Gidney waited until APT’s November Fall Marketplace in Fort Myers, Fla., to survey programmers about re-upping Escape from Iran for public TV broadcasts. By that time, Argo was doing well at the box office.

So far, 15 stations have expressed interest in purchasing the rights; APT anticipates more this month.

Beyond the tie-in to Argo, Escape from Iran stands on its own as a public TV documentary, Luskin said. “It’s a good, solid film on U.S.-Canadian relations, going back to President Carter.”

Triffo, director of Escape from Iran, began developing the film after the 20th anniversary of the operation, when the story of the rescue was declassified and discussed publicly for the first time.

CIA agent Antonio Mendez, the operative who led the operation, wrote about it in the winter 1999 issue of Studies in Intelligence, an arcane CIA digest. In the 10,000-word piece, “CIA Goes Hollywood: A Classic Case of Deception,” Mendez described in intricate detail how the agency extricated six Americans in early 1980 after they had holed up in the Canadian Embassy in Tehran during militant uprisings.

The operation tapped Mendez’s mastery of elaborate disguises and involved behind-the-scenes maneuvering in the Canadian Parliament. The CIA created a fake Hollywood studio called Studio Six and tricked Iranians into believing the Americans were Canadian producers of a film titled Argo. To pull off the ruse, the CIA persuaded Canadian lawmakers to approve authentic passports for the non-citizens, which the six used to quietly depart the country.

As word of Mendez’s remarkable account spread, Triffo was developing pitches for History Television in Canada. “We were looking for another idea, and this one caught our interest,” he said. “There’s such a strong Canadian connection.”

Triffo took the film into production with Executive Producer Ron Goetz and Producer Nova Herman. The team “went right to the original sources on everything,” he said. “The fact that it was declassified meant everybody could speak freely.” The filmmakers interviewed the Americans who had been trapped, “and they were able to really tell the story in first-person.”

Triffo recalls interviewing Mendez, the operative who pulled off the rescue, during production of Escape from Iran. “He asked me, ‘Do you know who Ben Affleck is?’” Triffo said. “I didn’t realize it at the time, but Affleck was already in negotiations for what would become Argo.”

Watching Affleck’s film was “really entertaining,” Triffo said, especially seeing all the characters he knew personally portrayed by actors. “And it was cool to see a nonfiction movie brought together in a fictional way.”

Triffo proclaimed Argo to be “remarkably accurate — about 90 percent accurate. They had a little fun with the Hollywood ending, the chase scene down the runway. That never happened.”

The admiration must be mutual for distributors of the feature film. Escape from Iran will be included as a bonus in the Argo Blu-ray package, set for Feb. 19 release from Warner Bros.

Partners in Motion COO and GM Jeff Stecyk said it’s “nice recognition” to have the documentary included in the Blu-ray package. “As part of the deal, we were able to get a signed poster from Affleck.”

One thought on “APT re-releases Escape from Iran as its fictional twin, Argo, vies for Oscars”