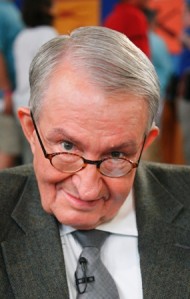 Wendell D. Garrett, an appraiser on Antiques Roadshow since 1997, died Nov. 14 at a hospice facility in Williston, Vt. He was 83.

“Garrett was an important member of Antiques Roadshow’s appraisal team,” the program said in a statement, “displaying a generosity of spirit and intellect over the years to the Roadshow community and viewers. Behind the scenes at Roadshow, Garrett was considered a master and scholar — a Grand Poobah — and he will be missed by all.”

Garrett had muscular dystrophy since he was 19 years old, and when he reached his 60s he found that walking became increasingly difficult. His New York Times obituary said he was known for “his white hair, impeccable suits, courtly manner and the wheelchair in which he sat.”

In addition to his work on Roadshow, Garrett was a retired senior vice president of the prestigious auction house Sotheby’s, and the longtime editor and publisher of The Magazine Antiques, a highly regarded publication in the field.

“Throughout his work,” the Times noted, “Mr. Garrett voiced the conviction that antiques should never be considered in a vacuum. They were tangible manifestations of the ethos of their time and place, he said, and as such — whether cups and saucers or entire buildings — could be windows onto American social history.”

Wendell Douglas Garrett was born Oct. 9, 1929, in Los Angeles. He received a bachelor’s degree in history from UCLA and master’s degrees from University of Delaware and Harvard.

He co-authored or wrote several books on the letters of President John Adams, as well as others including The Worlds of Thomas Jefferson; The Arts in America: The 19th Century; and In and About New York: A Somewhat Antique Guide.