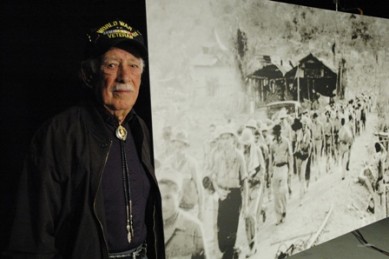 Bataan Death March veteran Pedro “Pete” Gonzalez recognized himself in this photograph of the march, on the set of PBS New Mexico's Bataan: A 70th Anniversary Commemoration. (Photo: KNME)

The Library of Congress has asked New Mexico PBS to contribute unedited footage of interviews from its program Bataan: A 70th Anniversary Commemoration.

The program recalls the horrors of the Bataan Death March of 1942, when the Japanese Army forced some 60,000 Filipino and 15,000 American prisoners of war to march more than 60 miles between internment camps. Along the way, thousands of Filipino and up to 650 American soldiers died due to physical abuse and other atrocities committed by their captors.

Bataan Death March veteran Pedro “Pete” Gonzalez recognized himself in this photograph of the march, on the set of PBS New Mexico’s Bataan: A 70th Anniversary Commemoration. (Photo: KNME)

The New Mexico PBS special, produced to commemorate the 70th anniversary of the fall of Bataan and distributed for national broadcast by NETA, included interviews with survivors.

Producers filmed 90 minutes of interviews with Pedro “Pete” Gonzalez, a survivor of the Bataan Death March, and William Overmier, survivor of both the battles of Bataan and the related Battle of Corregidor. Also participating was retired Lt. Gen. Edward Baca, former head of the New Mexico National Guard and the National Guard Bureau in the Pentagon, and longtime spokesman for Bataan survivors. Under the arrangement announced Jan. 11, footage of these interviews will be included in the library’s archives in Washington, D.C.

“The events at Bataan have great historical significance, but the number of survivors who can share what happened there is rapidly dwindling,” said Sen. Tom Udall (D-N.M.), whose office is partnering with the station in providing the footage, in the announcement. “The addition of these interviews into the Library of Congress will help to ensure that their heroic stories are not forgotten.”

“The firsthand accounts and stories of these survivors of Bataan are living history, something which New Mexico PBS was honored to preserve for future generations,” said Polly Anderson, New Mexico PBS chief executive, who will soon depart to lead WUCF-TV in Orlando. “Now these stories can be shared not just with New Mexicans, but with the nation and the world.”

Another partner in the submission is the Oasis Veterans History Project, a local initiative training volunteers to record veterans’ oral histories.