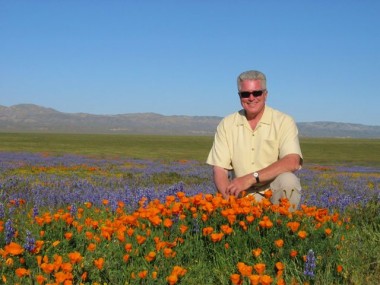 “We are deeply saddened by the news of Huell’s passing,” said a statement from KCET in Los Angeles, his longtime presenting station. “This is a tremendous personal and professional loss to his friends and colleagues, as well as his legions of fans.”

As KCET said in its statement, “Huell elevated the simple joys and undiscovered nuggets of living in our great state. He made the magnificence and power of nature seem accessible by bringing it into our living rooms. Most importantly, he reminded us to find the magic and wonderment in our lives every day. Huell was able to brilliantly capture the wonder in obscurity. From pastrami sandwiches and artwork woven from lint to the exoticism of cactus gardens and the splendor of Yosemite — he brought us the magic, the humor and poignancy of our region. We will miss him very much.”

He was born Oct. 18, 1945, in Gallatin, Tenn. “Huell” is a combination of his parents’ names, Harold and Jewel. He received a bachelor’s degree in history from the University of Tennessee, Knoxville. He served in the U.S. Marine Corps and worked on the staff of Sen. Howard Baker (R-Tenn.).

Howser began his television career at WSM-TV in Nashville, later hosting a magazine series on WCBS-TV in New York City. He arrived in Los Angeles in 1981 to report for KCBS-TV and joined KCET in 1987 to produce Videolog, a series of human-interest shorts that grew into his trademark California’s Gold.

Howser was active in charitable, civic and social groups throughout the state, and had close ties to Chapman University, a private school in Orange, Calif. In October 2011 he announced he was donating his archives to Chapman, which received all episodes, some 300 boxes of materials related to the series, papers, ephemera and memorabilia, and around 1,800 books about California. The trove will be housed in the university’s Leatherby Libraries; all episodes are being digitized and made available online. He also donated his domed, space-age–style residence to the school: a three-bedroom home on 60 acres in Newberry Springs, halfway between Los Angeles and Las Vegas, nicknamed “The Volcano House” for its setting atop a volcanic cone.

Howser was a very private person and insisted there be no funeral, Ryan Morris, a longtime assistant at Huell Howser Productions, told Current. “Huell did not want to have a ceremony or memorial, either public or private,” Morris said. “He just wanted people to watch the shows and enjoy the stories.”