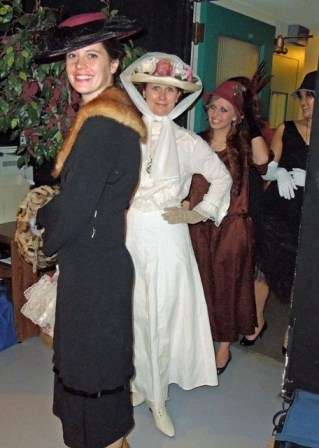 To whet local viewers’ appetites for the return of the megahit British drama Downton Abbey this Sunday, pubcasting stations across the country have organized lively events evoking Edwardian England, the period in which the Masterpiece Classics series is set.

As of this week, 112 stations have sponsored sneak-peek screenings of the first episode of Downton’s third season. Events have been staged in stations, local theaters, libraries, museums — and the only royal residence in the United States, Iolani Palace in Hawaii.

Illinois Public Media in Urbana partnered with the Krannert Center for the Performing Arts at the University of Illinois to organize a Dec. 18 event on the history of  Edwardian costumes. “We wanted to add value to the attendees’ experience, and adding an educational costume piece was a relatively easy way to do that,” said Lisa Bralts, marketing director. “People love the clothes on this show, and it’s such a wonderful way to denote the passage of time.” The center, known for its collection of historic pieces, provided “several beautiful and quite rare articles of clothing,” Bralts said. Some IPM staff members dressed in Edwardian garb provided by the center. About 300 fans attended the event, many registering to win Downton-related prizes.

Period fashion was also at the center of “A Light Tea for Season 3,” Dec. 13 at Prairie Public Broadcasting in downtown Fargo, N.D. “We encouraged everyone who came to dress for the occasion, and they did,” said Marie Offutt, communications manager. Nearly 90 people nibbled on English goodies supplied by the local Golden Spoon Traveling Tea Room, and fashion historian Joyce Yexley emceed a “Century of Ladies Fashion” runway show. PPM also set up a Downton photo booth at which attendees posed for portraits that appeared next to images of the aristocratic characters of Downton Abbey.

Arizona’s KAET welcomed a capacity crowd of 120, many in period styles, for its Dec. 15 screening in a circa-1920s building just across from its Phoenix headquarters. “We dressed the room with tables for 10, linens and fine china,” said Bob Beard, promotions and events coordinator. A local teahouse, Souvia Tea, provided finger sandwiches, scones, tarts and specially blended beverages, as well as a short presentation on tea culture; local etiquette experts spoke on manners of the era, and a professor of costume design from Arizona State University discussed the clothing.

Another special screening will be mounted tonight when PBS Hawaii’s welcomes local Downton fans to Iolani Palace. America’s only royal residence, the palace was built in 1879 and home to King Kalākaua, who reigned until 1891, and Queen Liliuokalani, the country’s last monarch, deposed in 1893.