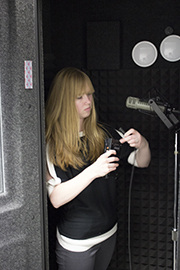 A four-year-old nonprofit news service established by two professors at Youngstown State University is taking on an expanded role in investigative news reporting and journalism training in northeast Ohio and beyond.

The News Outlet and its website, TheNewsOutlet.org, recipient of a two-year $302,000 matching grant in July from the James L. Knight Foundation and Cleveland-based Raymond John Wean Foundation, will increase its news coverage on the effects of the increase of oil and gas drilling in Ohio, Pennsylvania and western New York. The nonprofit startup will pursue journalism collaborations with public radio partners in all three states, and plans to convene public forums in communities to discuss issues raised by the coverage.

The News Outlet is the brainchild of Alyssa Lenhoff, director of the YSU journalism program, and Tim Francisco, journalism professor. The co-founders, both veteran newspaper reporters, built their newsroom on the premise that student journalists can help fill the gap in local investigative reporting in Youngstown, a city that struggles with its economic dependence on the troubled steel industry and history of organized crime.

Nearly one-third of Youngstown’s population lives below the poverty line, according to the 2010 U.S. Census, and only 10 percent of adult residents over the age 25 have higher-education degrees. WYSU, the local NPR affiliate, has a small staff of seven employees and no in-house local news operation.

At the time of the News Outlet’s launch, Lenhoff herself struggled with personal and legal troubles. She was charged in April 2010 with a misdemeanor for having unlawful interest in a public contract when she sought a $7,500 grant for YSU’s journalism program from the office of her then-husband, former Ohio Attorney General Marc Dann.

Dann had been the focus of an investigation by the Ohio Ethics Committee after resigning from office in May 2008 amid reports of sexual harassment in his office and an extramarital affair. By the time Lenhoff was hit with the charge two years later, she had filed for divorce.

“My ordeal has reaffirmed in me a commitment to fairness and a desire to recognize complexity that I believe I carry in my own reporting and try to teach students,” Lenhoff wrote in an email to Current.

Among the News Outlet’s high-impact investigative stories was a January 2011 report by YSU student Dan Pompili on conditions in a local mental health ward; the news coverage prompted the state to shut the facility down. And in May 2012, student reporter Christine Keeling won the Ohio Associated Press Best Investigative Reporting award for coverage of a local church’s handling of the sale of a tract of land.

Northeast Ohio houses a rich underground reserve of oil and gas deposits, and the booming hydraulic fracturing (fracking) industry is poised to bring new economic opportunity, and potentially environmental damage, to the region. As energy companies and the jobs they bring to Youngstown begin to play a bigger role in the regional economy and politics, the need for local news media to report on the changes grows.

With its new Knight Community Information Challenge grant, awarded in September, the News Outlet plans to step into this role, expanding its scope of coverage to other communities where oil and gas drilling are changing the landscape and the economy.

“This is an incredibly important story,” Francisco told Current. “You’re talking about Rust Belt communities that have been historically struggling with poverty, with crime, with infrastructure issues — everything due to the loss of steel. And now you have this amazing opportunity for transforming these communities, and that’s going to bring up a whole host of issues, everything from city planning and government regulations to environmental concerns.”

The Knight and Wean foundations had backed the News Outlet before, awarding $79,000 or less in program funds in both 2010 and 2011. The new matching grant, a more than threefold increase, includes a provision to both strengthen the News Outlet’s existing partnership with WYSU and seek collaborations with public radio stations in the states where it concentrates its fracking reporting. Wean is contributing $40,000 of the total grant, according to President Jeffrey Glebocki.

Francisco and Lenhoff have also developed a relationship with ProPublica, the investigative news nonprofit that’s reported extensively on fracking in collaboration with other news organizations, to provide training to their student journalists.

Stephen Engelberg, ProPublica managing editor, has taken on a mentorship role with the News Outlet’s students. After a visit to Youngstown at the beginning of the fall semester, Engelberg has met with the students weekly via Skype, and the reporters are crafting stories under his remote tutelage.

The student staff is a core component of the News Outlet’s journalism program and its case for foundation support: Much of the grant money pays for compensation of the student interns. Each reporter receives a $3,000 stipend for a semester’s worth of work, and the student managing editor is paid $5,000. Most of the student reporters are enrolled at YSU, though the News Outlet also employs some students from the University of Akron and Kent State University. Seven reporting interns are currently working with the News Outlet.

“We believe really strongly that student interns should be paid for their work, particularly our students who are often first-generation college students who don’t really necessarily have the means or the luxury of doing internships in major media markets for low or no pay,” Francisco said.

Interns from the News Outlet do have a different orientation, Engelberg told Current.

“The kids that I met there, they impressed me,” Engelberg told Current. “Most of them are in their mid-to-late 20s. They seem to be trying to make their way into journalism. This is a way that, frankly, kids from wealthier backgrounds wouldn’t have to go through, because mommy or daddy can pay for them to go to Columbia Journalism School.”

Doug Livingston is among the students who have moved on to paid jobs in journalism. He joined the News Outlet in 2009 and turned his stint as managing editor into a part-time job reporting on education for the Akron Beacon Journal.

Livingston worked for United Parcel Service for six years before enrolling at YSU in 2008 at the age of 28; after signing on at the News Outlet upon its launch, he was able to quit his construction job. With the exception of two semesters when he worked on other journalism projects, Livingston stayed with the News Outlet until this fall, when he left for the Beacon Journal.

“It really meant the world to my education,” Livingston said of the program, which he explained “allowed me to spend 100 percent of my time on campus doing what I wanted to do in the future, while being paid to do it.”

Looking past the past

For Lenhoff, the News Outlet’s success in winning grants and grooming college students for careers in journalism has helped her move beyond her legal troubles.

Lenhoff pleaded guilty to the ethics charge in 2010 and accepted a $1,000 fine and a suspended jail sentence, telling reporters, “I didn’t know at the time that it was a problem, but I do now and I’m really sorry.”

Reflecting on the charge, Lenhoff attributed her ability to rise above the plea deal and subsequent negative press coverage to her strong reputation in the community. Local papers that published stories on her case now run coverage produced by the News Outlet.

“I don’t blame any of the stories,” Lenhoff said. “My gosh — I’ve certainly written a share of those in my time myself. But I think that people that were able to really look at the tangible results of what we were doing were able to see something else.”

In a follow-up statement sent by email, Lenhoff elaborated on her guilty plea, saying she had not been in a financial or emotional position to defend herself against the charges. She also noted that she had discussed the proceedings at length with former Wean Foundation President Joel Ratner.

The Knight Foundation wasn’t aware of the guilty plea, according to Susan Patterson, a program director who works on the Community Information Challenge team. In awarding its grant, Knight vetted the Wean Foundation, its local grant partner, but not the staff of the News Outlet, she said.

Engelberg, who also said he hadn’t been aware of Lenhoff’s plea deal, said it wouldn’t have affected his decision to train the News Outlet’s reporters.

“Alyssa Lenhoff has a very smart, bright, interesting approach to teaching journalism,” Engelberg said. “I think you have to look at the work they’re doing, and it’s very solid and worthwhile.”