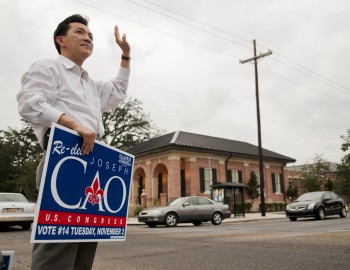 Anh “Joseph” Cao built his life around wanting to help people. A former Catholic priest turned family man and community activist in the Versailles neighborhood of East New Orleans, Cao decided he could do the most good in public service.

Mr. Cao Goes to Washington, premiering on PBS Jan. 3, 2013, follows the first Vietnamese-American congressman though his first term and campaign for re-election.

“His victory was the culmination of a lot of different events lined up,” said filmmaker S. Leo Chiang. “Everything was so improbable.” The director wanted to present Cao’s “unique opportunity” in a district composed of “75 percent Democrats, 65 percent of whom are African American.”

Mr. Cao examines partisanship and race “through the eyes of an idealist centrist who happens to be an Asian-American Republican who tried to survive in the ultra-partisan climate that exists in the country today,” Chiang said.

Chiang first encountered Cao when working on the documentary A Village Called Versailles, which aired on PBS’s Independent Lens in 2010. The film told the story of a Vietnamese neighborhood in East New Orleans that rebuilt itself after Katrina without government support.

Though Cao didn’t make the final cut of the film, Chiang was interested in doing a documentary on him but didn’t immediately pursue his idea.“I was told by other people to not waste my time because he would never win.”

Shortly after Cao’s election however, Chiang got the chance. Stephen Gong, executive director of the Center for Asian American Media, commissioned Chiang to do the film because of the filmmaker’s knowledge of and access to the Versailles community.

Asian Americans are the fastest-growing ethnic group in the United States, yet “immigrants are disproportionally absent from public service,” said Gong. “Running for office is the final chapter of arriving as an immigrant.”

But Cao never quite finds where he belongs. “It’s a character study of a perpetual outsider who happened to be placed in a position of power,” said Chiang.

Ranked as the most liberal Republican in the House by National Journal, he cast the sole Republican vote in favor of the first draft of the Affordable Care Act, citing that “it was the right decision for my district.” His constituents applauded, but his party did not.

Cao voted against the final bill because of his stringent stance against federal funding of abortion, knowing that the vote could cost him re-election.

“Because of the polarizing climate in the US today, people demonize the other side,” said Chiang. “I would like the audience to take away that it’s not that simple, and the people who disagree with you are not evil.”