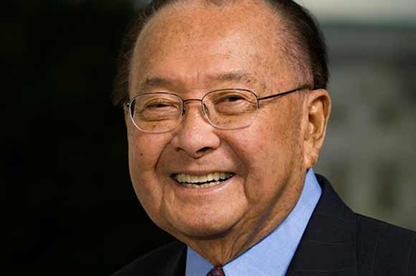 Sen. Inouye, a Medal of Honor winner and the second-longest-serving senator in U.S. history, began his senate career in 1963 and had represented Hawaii in Congress since it became a state in 1959. He served on the Senate Commerce Committee from 2007-09 and on the Appropriations Committee from 2009-12. As president pro tempore of the Senate, Inouye was third in the line of succession to become president.

“He was always there, and whenever we needed a letter of support written it would come back almost before we would ask for it,” Michael Titterton, president and g.m. of Hawaii Public Radio, told Current. “Had he not felt the way he did, then life would’ve been a lot tougher — a lot earlier — for public broadcasting.”

“He had a heart for education and always wanted to make sure that people with fewer opportunities for advancement were able to watch our programs,” Wilcox wrote in an email to Current. “He saw our work as a way to help citizens gain knowledge and enjoyment of things beyond their current experience. He wanted people to tap public broadcasting to maximize their potential and realize their dreams.”

The Association of Public Television Stations presented Sen. Inouye with the Champions of Public Broadcasting Award in 2007. He had attended the 2012 Public Media Summit in February.

“The public television community is deeply saddened by the passing of Sen. Daniel Inouye, a true American hero, the pride of his beloved Hawaii, and a steadfast champion of public broadcasting,” APTS C.E.O. Pat Butler said in a release Tuesday.

As Hawaii’s public broadcasters look to a future without Inouye, they admit the road will seem less certain without their longtime champion.

“I don’t know what we’re going to do now,” Titterton said. “He’s a tough act to follow.”