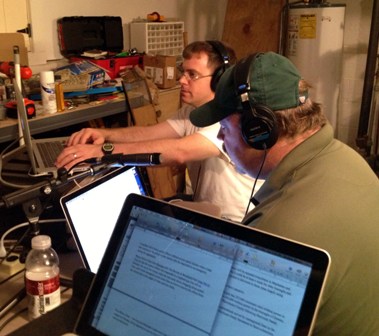 When Superstorm Sandy slammed into the most populated region of the United States Oct. 29, claiming at least 90 lives and wreaking havoc on everything in its path, public broadcasting stations along the Eastern Seaboard couldn’t escape the storm’s wrath.

Stations knocked off the air by electrical blackouts included WBGO in Newark, N.J.; New York’s WNYC-AM; two of the New Jersey Public Radio stations operated by WNYC; and WFMU in Jersey City, N.J. Station managers, engineers and deejays improvised during the chaos of the storm to maintain news and information broadcasts to anxious listeners or to provide a musical respite from the pounding winds and rain.

To get back on the air in Providence, Rhode Island Public Radio temporarily took over a student-operated college station; in New Jersey, a crew of WBGO staff set up a makeshift studio in the home basement of David Tallacksen, v.p. of operations and engineering.

WBGO News Director Doug Doyle was among those riding out the storm in Tallacksen’s basement. Unbeknownst to him, his own home — in a beachside apartment building — was destroyed while he was on the air.

WBGO’s primary transmitter is in New York City, and the jazz station didn’t have a working generator for its studio headquarters in Newark when Sandy hit. When the power grid for downtown Newark went down, the station’s engineers realized that they couldn’t get to their transmitter in New York. Tallacksen offered his basement.

“Our plan in this instance was to get to a place that still has power and connectivity,” Tallacksen wrote in an email to Current. “Luckily, my home in nearby Bloomfield was in a pocket of an area that remained lit and connected. So we quickly set up a studio area in my basement.”

The fly-by-night setup allowed WBGO to continue programming music and local updates; the station picked up NPR newscasts by accessing online streams of other public radio stations. The team spent more than 24 hours at Tallacksen’s house manning the station, returning to the Newark studio facilities Oct. 31 after power had been restored. WBGO’s website remained down for the rest of the week, but has since gone back up.

Doyle, who had been working overnight at a commercial station before settling in with the WBGO crew, had been away from his apartment for days, he told Current. “There was a period of a couple days where I had no idea if I had a place or not.”

From Tallacksen’s basement, Doyle heard from neighbors about the devastation Sandy had wrought on his neighborhood. He finally returned to his apartment Oct. 31. “It looked like a war zone,” he said. The building was still standing but had been condemned because the floors were unstable. Authorities agreed to let him retrieve his items from his apartment, and now he’s staying with his girlfriend.

Hudson River at the door

As ears turned to New York’s flagship public radio station, WNYC, for news and comfort during and after the storm, the pubcaster was grappling with numerous technical setbacks. Its transmitter broadcasting on 820 AM went down in the storm, and at least two of its four New Jersey Public Radio outposts — WNJT 88.1 FM in Trenton and WNJY 89.3 FM in Netcong — also went dark. New York Public Radio began operating four stations serving northern New Jersey in June 2011.

WNJT and WNJY recovered within the first few days of the aftermath. Laura Walker, president and CEO of New York Public Radio, said in an email to listeners the following weekend that WNJT and WNJY had returned to the airwaves. However, she also noted that WNYC’s AM transmitter remains dark, as does its WNJO station, which serves the Jersey Shore community of Toms River, about 50 miles north of Atlantic City, where Sandy made landfall.

WNYC tapped longtime anchor Brian Lehrer for special live coverage on the evening of Monday, Oct. 29; his regular morning show was extended by an hour the next day. During the Tuesday morning broadcast, Lehrer interviewed Elmo from Sesame Street for a segment about comforting children who were frightened by the hurricane.

Another bright spot for WNYC: Its website, which maintained service through the storm, is seeing record traffic, according to Houlihan. Visitors are drawn to comprehensive data maps of the storm’s path, which have been picked up by Reuters, Google and many other outlets.

Freeform WFMU was not as lucky. Its studios and transmitter sites lost power during the superstorm’s assault, knocking the station off the air and Internet. The Hudson River came within 50 feet of the station’s front door, but the studios were not flooded, said Ken Freedman, g.m.

WFMU restarted its web stream after a 12-hour outage by streaming directly to its web servers from deejays’ homes. Freedman hosted programs from the house of a friend in Hoboken who had working power and Internet. His own home had lost power and was flooded with four feet of sewage.

As of Nov. 5, both of WFMU’s transmitters — 90.1 FM in Mount Hope, N.Y., and 91.1 FM in Jersey City — remain off-air, according to the station’s website.  Electrical power had been restored to one, but the station could not feed audio to it. Deejays had returned to WFMU’s headquarters in downtown Jersey City, but the studios had suffered major electrical damage.

Freedman estimated that the station sustained $250,000 in damage from the storm, with $150,000 of that chalked up to the cancellation of WFMU’s annual record fair, its biggest event of the year.

Three of the four New Jersey transmitters operated by New York’s WNET were running on backup generators late last week, and station officials couldn’t predict when power would be restored. The transmitter serving New Brunswick, WNJB, was knocked off the air during the peak of the storm Monday evening but was restored by 11 a.m. Tuesday. WLIW in Long Island, a sister station to WNET, went dark for 20 hours after its backup generator failed.

NJTV, the network of stations serving New Jersey, produced a live report on Sunday night as the state girded for Sandy’s arrival, and six live programs over the next two days. Tuesday night, after the worst of the storm had passed, WNET and NJTV collaborated to produce a live news program about the superstorm’s impact.

Student radio to the rescue

Faced with a power outage and a failed backup generator at Providence-based Rhode Island Public Radio, General Manager Joe O’Connor called on a powerful friend of the station for help.

When O’Connor first met the Reverend Brian Shanley two years ago, the president of Providence College had complained to O’Connor about the limited reach of WRNI-AM, a station that Rhode Island Public Radio later swapped in a 2011 deal. WRNI now broadcasts on 88.1 FM in Providence, but as Sandy blew through, the station was off the air.

On the evening of Monday, Oct. 29, O’Connor emailed Shanley to inform him of RIPR’s dire situation. The broadcaster thought the message was a shot in the dark, and he expected it to go unanswered for a few days. But Shanley responded in less than 30 minutes, insisting over the phone that RIPR’s staff come to campus and broadcast from WDOM, the school’s 125-watt student radio station. Though its signal is weaker than RIPR’s, WDOM’s service covers all of Providence, including the areas hardest hit by Sandy’s fierce winds.

“I dropped the phone, and he must’ve heard me say ‘Holy shit,’” O’Connor recalled. After campus security fetched WDOM’s student general manager Brennan Callahan from his dorm, where he had been waiting out the storm in his pajamas, RIPR was broadcasting out of WDOM that night.

Following the generous display of camaraderie from the private Roman Catholic university, “I texted Father Shanley and said ‘I am now reconsidering my agnosticism,’” O’Connor said.

Further north, Sandy disrupted one of the most high-profile election programs planned by Boston’s WGBH-TV — a debate between Elizabeth Warren (D) and Scott Brown (R), candidates in Massachusetts’ hotly contested race for the U.S. Senate. The face-off, scheduled for Oct. 30, was to be moderated by CNN anchor John King.

WBGH postponed the debate Oct. 29, and when producers tried to reschedule with the candidates, Brown pulled out, citing a packed schedule in the final week of the campaign. Linda Polach, e.p., told the Boston Globe that the debate’s cancellation was “very disappointing for all the citizens who will not have an opportunity to hear directly from the candidates a week before the election.”

Coastal stations farther from Sandy’s landfall zone path got through the storm with no disruptions. WCAI-FM, serving Massachusetts’ Cape Cod and coastal communities, broadcast continuously, as did WDDE, the new NPR station serving the state of Delaware. WHYY-FM in Philadelphia, which also operates five stations in New Jersey, also maintained power and remained on the air.

Sandy also disrupted one of public TV’s major fall confabs — the National Educational Telecommunications Association conference, convened in St. Louis Oct. 30–Nov. 1. Although dozens of attendees and speakers from the East Coast had to cancel their travel plans, NETA went ahead with the conference, offering Skype and web-based file-sharing services to allow presenters to participate virtually. NETA officials reported that about 50 of the 300 registered attendees missed the conference because of flight cancellations.

Reported with assistance from Dru Sefton and Jon Kalish.

Editor’s note: This article has been revised to include David Tallacksen’s full title as WBGO’s v.p. of operations and engineering and to correct two misreported details: Tallacksen lives in a house, not an apartment; and WBGO provided local news updates as well as music programming during the storm.
Questions, comments, tips? lapin@current.org
ShareTweet EmailPrint More

One thought on “Pubcasters battered by Superstorm Sandy”