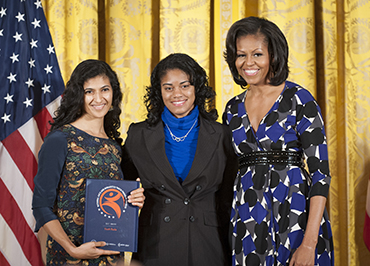 Senior producer Nishat Kurwa and contributor Shyra Gums, a high school senior,  received the 2012 National Arts and Humanities Youth Program Award from Obama, who is the honorary chair on the President’s Committee on the Arts and the Humanities. Youth Radio was one of 12 programs in the nation to recognized this year. Others included a youth mariachi band from San Fernando, Calif.,  and a debate program from The Bronx, N.Y.

Founded in Berkeley in 1992 by former Pacifica reporter Ellin O’Leary, Youth Radio now trains 420 participants  between the ages of 14 and 24 per year and employs around 200. Eighty percent of its trainees coming from low-income backgrounds and/or are youth of color, according to Youth Radio’s website. Youth Radio participants produce some 3,000 features annually, many of which are broadcast on NPR’s news magazines. Commercial radio stations and  other media outlets also air Youth Radio programming.

Youth Radio has bureaus in Washington, D.C., Atlanta and Los Angeles, and its correspondents have reported on everything from wars to election campaigns to music and culture. They also take on their own productions,  such as a remix of Marvin Gaye’s “What’s Goin’ On.”  Youth Radio stories to date have won two Peabody awards and four Edward R. Murrow awards. In 2011 the nonprofit launched an online arts and culture news portal called Turnstyle, funded by a nearly $2 million grant from CPB.

“To think that we wouldn’t invest in this, that we wouldn’t find resources to continue to allow these gifts to grow,” Obama said during the ceremony to the awardees. “What you all do is so amazing, and so important, and so necessary.”

Gums, a poet and collaborator on Youth Radio’s Remix Your Life creative expression program, joined the organization in September 2011.

Gums wasn’t sure how she had been chosen to represent Youth Radio. “There wasn’t a fight” among trainees to travel to the White House, she said. “They just randomly selected me. I was so surprised.”

But Kurwa, who’s been with Youth Radio for 10 years, was quick to correct her. “It wasn’t random,” she said. “It’s because you’ve accomplished a lot and you’re a leader.”

Gums laughed sheepishly. “It was random to me,” she said, smiling.

Editor’s note: This article has been revised to correct the year Youth Radio launched Turnstyle, and to include information about the CPB grant for the project.
Questions, comments, tips? lapin@current.org
ShareTweet EmailPrint More