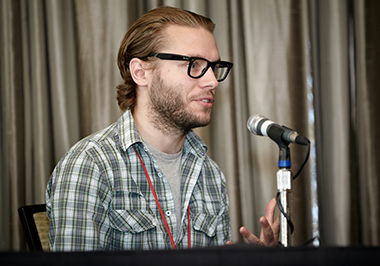 EVANSTON, Ill. — If the Third Coast International Audio Festival exists to shine a spotlight on exceptional radio craftsmanship, the ShortDocs Challenge that runs alongside it exists to draw new talent into the world of audio storytelling.

The 2012 ShortDocs contest hit the mark, setting a new record of 180 entries with two of the top prizes going to newcomers in audio production. Luke Eldridge, a financial services worker from London, and John Musto, an electrician from Chicago, were two of the four ShortDocs winners honored Oct. 6 during the biennial Third Coast Conference. Their entries had each been produced in less than three weeks and beat those submitted by far more experienced public radio producers.

“A lot of these people have studied for years and worked really, really hard, and then this guy just uses a lot of really, really basic tools and gets up on stage,” joked Eldridge, whose piece, The Red, White and Blue Bus, wowed Third Coast veterans —  including This American Life host Ira Glass. In his keynote speech, Glass played a clip from the piece, presenting it as evidence that 2012 is a golden time for public radio.

Radio amateurs have participated in ShortDocs since its inception in 2003, and at least one non-professional has received a prize every year the contest has been held, according to Julie Shapiro, Third Coast artistic director. But it is unusual for complete first-timers to come out on top.

“I think this is a great sign that a lot of people out there are interested in producing audio stories, and will jump at the chance when given the opportunity to do it,” Shapiro wrote in an email. “It’s impossible to say for sure, but I’m confident that dozens of submissions came from first-timers.”

ShortDocs was conceived as a way to foster and encourage aspiring audio producers, and provide new creative challenges for radio professionals. Two additional ShortDocs 2012 winners, Adam Kampe and Abby Wendle, are both full-time audio producers: Kampe, whose piece focused on a chess club in Washington, D.C., works for the National Endowment for the Arts; Wendle, who compiled stories recollecting the 1995 Oklahoma City bombing, works for the Tulsa, Okla.–based independent media company This Land Press. Wendle is also a newcomer to ShortDocs, winning on her first run in the contest, according to Shapiro.

The rules for this year’s contest were strict. Beyond length restrictions between two-and-a-half and three minutes, each submission had to feature at least two “neighbors,” use a color in the title and contain at least three seconds of “narrative silence.”  Co-sponsors EveryBlock, an online neighborhood forum, and SoundCloud, an online audio publishing platform, collaborated with Third Coast on the contest.

The 2012 competition, which was judged by five Third Coast staff members and six EveryBlock representatives, had the highest ratio of “new (to us) participants” in ShortDocs history, Shapiro said.

To produce his piece about the imagined lives of the strangers who share his workday bus commute, Eldridge used his MacBook’s built-in microphone and basic editing software. To record his narration, he stood on a chair and talked through an embroidery hoop.

“I didn’t have an appreciation of the radio, the broadcasting element of some of this stuff,” the 27-year-old Eldridge told Current, explaining that he learned about U.S.-based public radio programs by listening to them as podcasts during his two-hour daily commute. “I’m in the U.K. I just press ‘Subscribe’ on iTunes and that’s it. That’s how it comes to me.”

Eldridge discovered the ShortDocs competition by listening to Third Coast’s own Re:Sound podcast, and decided to produce a piece that was set on the bus where he first discovered the world of public radio. “I thought, ‘Well, that’s easy.’ I mean, not easy, but I can do three minutes,” he said.

During his ShortDocs presentation, Eldridge said he still refrains from talking to his bus mates; however, he admits the way he perceives his ride has changed.

“It’s become something different for me now, that bus journey. I get on and I see these faces and it takes me to somewhere else,” he told Current. “I’m thinking, ‘Yeah, I made a story about all you guys, and it got me to Chicago.’”

Recording for a bruising

John Musto, a fresh-faced ShortDocs winner, lives in the Chicago neighborhood of Pilsen, a short drive from where Third Coast convened this year’s conference. He saw the contest as a chance to tell the story of his 80-year-old mentor Don Floyd.

“There’s something about this fellow. He’s such an attention-grabber, and he’s such a ham that he loves to be in front of people,” the 31-year old Musto told Current. “I figured if I could get him amplified to the biggest pool, that would make him happiest.”

John Musto, a Chicago electrician, recorded stories of the life and neat-death experiences of his mentor. (Photo: Kate Joyce Studios)

Floyd had been an upholstery instructor at the College of DuPage for 27 years; Musto was a student in one of the last DuPage classes he taught, and afterwards he became Floyd’s apprentice. Musto works evenings as a union electrician for the city of Chicago, but he first became interested in radio as an undergraduate at the University of Iowa. After Floyd suffered a heart attack in March, Musto decided to record him as he recounted his life (and numerous near-death experiences).

In gathering material for his entry, Musto coached Floyd and members of his family to retell his stories and philosophies.

“Hey, Don, what’s it all about?” asks the family in the piece, in unison.

“Hell if I know,” Don responds. “I just took life as it came. If it kicked the hell out of me, I kicked back.”

Musto has listened to public radio for 10 years, but he’d never contributed — creatively or with donations — before entering the Third Coast contest. “I just was usurping the public radio that other people were supporting,” he said. “I am in my first six months of being an active supporter.”

Now that Eldridge has had a taste of life in radio, he wants more. He plans to submit work to In The Dark, a grant competition sponsored by a British radio collaborative. He’s also considering turning his sports blog into its own podcast.

Though Musto, unlike Eldridge, sees his audio work as a “novel pastime,” he’s also beginning work on his second piece, which will focus on another Chicagoan with a unique voice.

“I am a big fan of the human stories,” Musto said, citing the late Chicago author and broadcaster Studs Terkel as an inspiration for his work. “There are a couple vignettes of people’s lives that make me think it’s not so bad, you know? That’s life.”