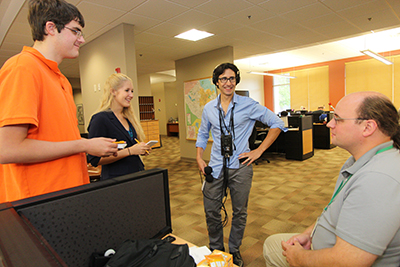 A partnership between a public radio station, a private university and a for-profit newspaper is beefing up local news coverage in Georgia’s fourth-largest city while testing whether public and commercial news media can bridge the fundamental differences in their business and service models.

Three years in the making, the Center for Collaborative Journalism at Mercer University (which will hold its official ribbon-cutting ceremony on Sept. 28) places Georgia Public Broadcasting’s radio station serving Macon and central Georgia on Mercer’s campus in new studio space on the ground floor of a just-opened student housing complex.

The McClatchy-owned daily Telegraph, which covers the same geographical region as GPB Radio Macon, is the lead content provider in the collaboration, and shares a newsroom with GPB on Mercer’s campus. GPB’s new studio is located in a separate building nearby. Together, the news partners are working on plans to divide coverage of Macon and bring journalism students into their newsroom for work experience that goes well beyond that of a typical internship.

The Center for Collaborative Journalism, which began operating in July, isn’t the first editorial partnership between a daily newspaper and the local public radio station — WLRN-FM and the Miami Herald have a long track record of putting their journalists in the same newsroom to expand the reach and impact of their reporting — but it may be the first for a city as small as Macon. With a metro population of 370,000 people aged 12 and older, it is ranked as Arbitron’s 132nd-largest radio market.

The project is funded by the Knight Foundation, which provided a $4.6 million five-year grant backing the collaboration in December 2011. Additional grant support helped to reduce the financial risks of the collaboration for Mercer: $1 million provided by the Peyton Anderson Foundation covered the costs of building the Telegraph’s newsroom and offset revenues that real estate developers might have earned from leasing the same space for retail.

Prior to joining the partnership, GPB Radio Macon had only one full-time employee — bureau chief Josephine Bennett. In July the station hired Adam Ragusea, who had been a news anchor and associate producer at WBUR in Boston, as Morning Edition host and site supervisor, and recruited a part-time development specialist. Though Bennett plans to leave the station, Ragusea says terms of the grant will allow for two new reporters to join the newsroom over the next two years.

The Telegraph is also feeling constrained by the shaky economics of the news business. It remains profitable but has imposed furloughs on most of its newsroom employees and may eventually place news content on its website behind a paywall. McClatchy recently implemented a pilot paywall program for five of its newspaper websites, but the Telegraph’s was not among them.

According to top staff members at both organizations, McClatchy will explore plans to expand the paywall system to more of its newspapers, including the Telegraph, if the pilot is successful.

Telegraph publisher George McCanless said the timeline for decision-making about a paywall hasn’t been set, and he rejected the notion that the grant-funded collaboration with GPB affects the Telegraph’s financial plans.

“Us doing a paywall has nothing to do, in my mind, with Mercer and GPB,” McCanless told Current. “Our website is still our website. We’re involved in the Collaborative, but we’re still a publicly owned newspaper company, and our newsroom continues to operate independently, just like it did before we relocated over there.”

Ragusea shrugs off the potential for conflict between journalists working for for-profit and nonprofit news organizations. “The people making the news at commercial for-profit newspapers are generally, in my experience, functionally nonprofit. They are service-oriented people,” he told Current.

At present, most of the content-sharing is one-way — from the Telegraph to GPB Radio Macon. Tentative plans call for GPB’s locally-produced content to be rewritten and cross-posted on Macon.com, the Telegraph website, in the future. Even if the Telegraph does adopt a paywall for its website, none of GPB’s content would be put behind it, according to Ragusea. “That’s not going to happen,” he said.

Ragusea sees functioning as “one news organization” as a goal of GPB’s integration with the Telegraph. He sits in on the paper’s editorial meetings every morning to discuss coverage plans, adapts newspaper stories for radio broadcast and invites Telegraph reporters on Morning Edition to discuss their latest stories. On Sept. 10, the Telegraph’s S. Heather Duncan appeared on GPB to share her investigation of a local school superintendent’s directive to teachers to underreport disciplinary problems in public schools.

“I hate daily news,” Ragusea said. “We are neither organizationally nor culturally adept at doing daily news.”

The center’s top players have embraced the spirit of collaboration, and express no qualms about sharing a mission with a different business model.

“I actually think it’s wonderful,” said Ryan about GPB journalists working alongside a for-profit newspaper. “I’m really interested in new and fresh partnerships for public media. If we continue just to stay in our enclosed world, I don’t know how we grow.”

Ryan has spent the bulk of her career in commercial media, previously as the executive vice president and general manager of CNN. Among her primary motivations for pursuing the collaboration is the opportunity to expand coverage of cities where GPB Radio stations are located; at the moment, the 17 local stations in its statewide network pull the majority of their non-national content from GPB headquarters in Atlanta. Ryan looks to GPB’s Savannah station, which currently employs four people, as the network’s next potential target for local newsroom expansion.

Meanwhile, journalists at both news outlets are mindful about the challenges ahead as they move to hire staff and integrate the Mercer students to a greater extent. “I can’t say no conflict will ever present itself, and we’ll have to deal with it when it comes, but we all went in it with our eyes open,” Telegraph Executive Editor Sherrie Marshall said.