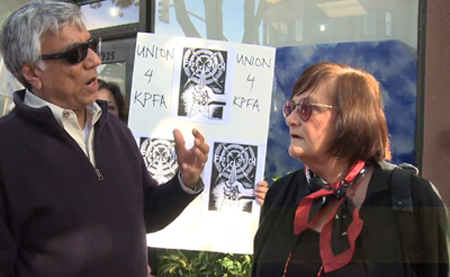 Arlene Engelhardt, right, at a 2010 protest of program changes at KPFA (Photo: kpfaworker9415 via YouTube).

Leaders of the Pacifica Foundation will seek a new executive director for the radio network, and are asking stations for financial information before ordering across-the-board cuts pushed by current Executive Director Arlene Engelhardt.

Arlene Engelhardt, right, at a 2010 protest of program changes at KPFA (Photo: kpfaworker9415 via YouTube).

The Pacifica National Board voted July 22 not to renew the contracts of Engelhardt and of Chief Financial Officer LaVarn Williams, both of which expire Nov. 30. Board Chair Summer Reese declined to disclose the reasons behind the majority vote, on advice of counsel. Engelhardt and Williams were invited to apply for new terms as a search to fill the posts gets underway.

In a separate but related action, the board delayed budget cuts totaling $1 million at Pacifica’s five stations. Engelhardt had ordered the cuts after an auditor’s report questioned the network’s financial viability (Current, July 9).

The board ordered the stations’ general managers July 23 to assess budgets and submit plans to deal with any projected shortfalls.

The board needs the information and “full engagement by the general managers” to make informed decisions, Reese said. Pacifica’s unionized employees have been notified that any anticipated layoffs as a result of the budget cuts have been put on hold until the situation is sorted out, she said. A handful of layoffs that took place prior to the board meeting, including the layoff of the business manager at New York’s WBAI, will not be rescinded, however.

Station reports, due July 30, were still coming in as of Current’s deadline. The findings are to be discussed at the next board meeting, Aug. 9, Reese said.

The network needs to address declining listening to stations and onerous real-estate contracts held by the stations, some of which are unsustainable, Reese said. Mounting debts to program providers also need to be resolved, she said.

Engelhardt’s cuts could still be enacted after stations submit their plans, but supporters of the board’s vote hope they won’t be. The board action “requires the local stations to take responsibility for their own problems” instead of submitting to across-the-board cuts, said Margy Wilkinson, chair of the Local Station Board at KPFA, Pacifica’s station in Berkeley, Calif.

“We need a plan, and the place to start with a plan is the place where they put the radio on the air,” she said. “And that’s the local station,” she added.

“One of the problems, from my point of view, is there’s not enough in-depth discussion about exactly what’s in bad shape and why,” said PNB member and former Pacifica staffer Dan Siegel, who put forth the motion requesting the station reports. Four of Pacifica’s stations — KPFA, Los Angeles’s KPFK, KPFT in Houston and Washington, D.C.’s WPFW — appear to be keeping to their approved fiscal year 2012 budgets, Siegel said.

“I don’t feel the case has been made that stations . . . living within their budgets, with two months left in the fiscal year, should be required to make further budget cuts above and beyond what’s been approved,” he said.

Siegel singled out WBAI, which for years has struggled with expenses for offices and tower rental, as contributing to Pacifica’s financial dire straits. He introduced a motion that has yet to be voted on to force WBAI to move within 60 days.

He also criticized the national office, which he said receives 20 percent of the stations’ income, for running up a debt of what he said was $2 million. Democracy Now!, which airs on Pacifica’s stations, is owed $1.5 million alone, he said. The rest is owed to vendors, including lawyers, and Free Speech Radio News, another news program. The board had not approved delaying payments to Democracy Now!, Siegel said.

Asked why the board decided to take action now and did not intervene earlier, Siegel cited several reasons, including political division, which he said leads to tough questions being painted as “an attack on the other side.” Additionally, he said, “I think the people who have been in charge of our finances have been very opaque in terms of clarifying the challenges and the problems. And as a self-criticism, I think some of us on the other side have not been as assertive as we should have been about getting to the heart of this.”

The auditor’s report, he added, “seems to have had a sobering effect on a majority of members of the board,” erasing some of the previous political divide.

Williams declined to comment on the board action regarding her contract, and Engelhardt did not respond to requests for comment.

Pacifica historian and Radio Survivor blogger Matthew Lasar, who has written two books on the network, floated a proposal on Aug. 5 to dismantle the Pacifica Foundation and transfer its stations’ FCC licenses to their local boards.

Also on Aug. 5, former Pacifica Foundation board member Carol Spooner penned an open letter to the network’s National Board calling for an “amicable divorce” at Pacifica and a “signal swap” at its priciest station, WBAI.

Radio advocate blog SaveKPFA has its own stirring account of the July PNB meeting, with a recap of community reactions.