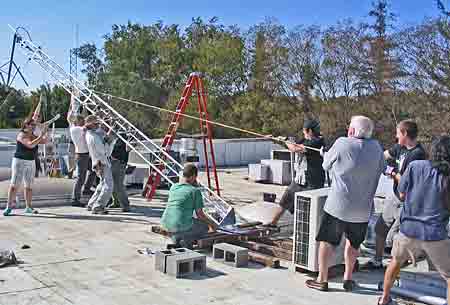 Volunteers for KDRT in Davis, Calif., had to erect a new antenna after a full-power station encroached on their LPFM’s frequency. (Photo: Davis Media Access.)

Advocates for low-power FM are readying for a push to add hundreds of the mini-stations to the country’s airwaves as the FCC lays the groundwork for a filing window for LPFM applications, the first in more than a decade.

The new noncommercial stations, which broadcast at 100 watts or less, will join the ranks of about 800 LPFMs already on the air. Most of the established stations are in less-populous cities and rural areas, places where LPFMs could fit within the stricter limitations in effect for the first round of applications. This time around, those restrictions have been loosened, allowing for many more LPFMs, possibly in cities as big as Atlanta, Dallas and Houston.

As LPFM advocates prepare for a vast expansion of low-power service, would-be applicants can learn from the experiences of LPFMs that have already taken root. Like their full-power counterparts, the nonprofit broadcasters enjoy the mission-driven rewards of serving niche audiences. Operated exclusively by nonprofits, low-power stations often target narrow audiences or take up the patchwork-quilt style of programming common to many community stations.

But LPFMs face challenges particular to their low-power class, such as being forced to change frequencies to accommodate moves by encroaching full-power stations, or struggling to raise enough money from relatively small audiences to stay on the air.

For supporters of locally focused community radio, an additional challenge for the upcoming filing window will be matching the efforts of religious broadcasters, some national in scope, seeking the same frequencies. A 2009 study by researchers at Penn State University found that nearly a quarter of LPFMs then broadcasting were affiliated with national religious organizations. Some mainly pipe in nationally syndicated programming and offer little locally originated content.

Fingers crossed for double the LPFMs

The FCC is expected to open a filing window for LPFM applications in the spring of 2013 at the earliest, according to Ian Smith, program director with the Prometheus Radio Project. Founded by former pirate broadcasters who went legit, the Philadelphia-based nonprofit has spearheaded national campaigns to recruit community organizations to apply for low-power licenses.

Though the application window may seem far off, Prometheus is already prepping applicants. The Local Community Radio Act, enacted by Congress in late 2010, allows for LPFMs in major urban markets. The law reversed restrictions imposed by Congress in 2000 that prevented low-power stations from broadcasting on frequencies that were third-adjacent to full-power stations — that is, three clicks away on the dial.

Prometheus and other low-power advocates hope the FCC will allow even more filing opportunities by considering second-adjacency waivers in some situations. Such a waiver could license an LPFM to broadcast just two clicks from a full-power station if the applicant can establish that its station would not interfere with neighbors.

Second-adjacency waivers would double the number of LPFMs that could be licensed after the next window, according to estimates by Prometheus. Some could fit in markets as big as Miami, San Francisco and Washington, D.C. (New York, Los Angeles and Philadelphia appear to be off-limits even in a best-case scenario.)

The FCC recently asked for public comment on whether it should grant such waivers. A Prometheus campaign delivered more than 1,000 comments to the commission in support of the proposal.

Meanwhile, NPR and the National Association of Broadcasters, looking out for the interests of their full-power constituents, urged the FCC to use greater discretion in granting waivers. Smith expects that the commission will decide about the waivers later this year or in early 2013.

Prometheus is now working with national labor organizations, environmental nonprofits and other groups to publicize the filing opportunity. More than 2,000 individuals have contacted the organization about starting stations.

Religious applicants are also likely to make a strong showing, as they have in past LPFM and translator windows. According to data compiled by the website CommunityMediaDatabase.org, 384 of 872 LPFMs now on the air broadcast religious programming — about 44 percent.

To prevent religious stations and others from simply rebroadcasting nationally syndicated feeds, Prometheus has suggested that the FCC give priority to applicants who take steps to localize their content, and has asked the commission to require LPFMs to broadcast at least 20 hours a week of locally originated programming.

The high level of interest in starting new LPFMs is promising, Smith says, but applying is only the first step in getting a station on the air. “It’s a long process. You get a station and then you have to run it.” At a nonprofit organization with high staff turnover, the lineup of people shepherding the station to the air can change significantly along the way to broadcasting.

Fundraising poses a substantial challenge to LPFMs, according to Smith and several LPFM operators. A low-power station operates at 100 watts maximum, covering a radius of about 3.5 miles. The lower wattage requires less electricity, keeping utility bills lower, and most stations avoid the cost of paying staffers by relying mainly on volunteers. But the circumscribed audience provides an LPFM with a smaller pool of potential donors.

“Most of the time, I get, ‘We love your station, but we can’t hear it,’” says Abney of Sacramento’s KDEE-LP. Broadcasting since 2003, the station was created by the city’s California Black Chamber of Commerce Foundation to serve African-American listeners. Its broadcast schedule includes a variety of music shows as well as talk programs about health, real estate, the environment and other issues.

Through a mix of underwriting, corporate grants, donations and other sponsorships, KDEE is able to pay two full-time staff members from an annual budget of about $80,000, according to Abney. The station has just started to explore on-air fundraising, he says.

In Davis, Calif., eclectic-format KDRT-LP has done fairly well on the fundraising front. It raises about $20,000 from listeners and sells about $10,000 in underwriting each year. The station is licensed to the city’s public-access operator, Davis Media Access. Though KDRT gets no proceeds from the franchise fees that support Davis Media Access, the connection gives the radio station more visibility in the community, says Jeff Shaw, station director.

KDRT’s biggest troubles have come not from a lack of funds but from conflicts with a full-power commercial station, KMJE. The station moved closer to Sacramento, landing on KDRT’s frequency and forcing it to move to another. FCC guidelines don’t shield LPFMs from such encroachment.

“That took a lot of momentum out of doing things such as building an underwriting program,” Shaw says. KDRT may have to switch frequencies yet again to make room for the full-power station.

“We are the redheaded stepchild of broadcasting,” says Randy Bennett, a co-founder of WGRV-LP in Melbourne, Fla. Launched in 2002, the station operates two translators that extend its signal into Palm Bay and Cocoa Beach. It airs a smooth-jazz format, dubbed “The Groove,” and has produced hundreds of community events.

Operated by Brevard Youth Education Broadcast Corp., the station runs on the efforts of about a dozen volunteers and an annual budget of roughly $36,000. Underwriting and donations cover most of that, but it’s been a struggle, says Bennett. Making matters worse, the Melbourne region was hit hard by layoffs when a space center was closed down.

Bennett argues that the FCC should loosen restrictions on the underwriting messages that air on LPFMs, which must adhere to the same guidelines as full-power noncom stations. Small businesses have balked at buying underwriting on WGRV because they can’t use certain language, he says

If the FCC expects LPFMs to be community-supported, Bennett says, “either give them enough power to cover enough people to have a bigger sponsorship and donation base, or allow the businesses and community people who live within range to support the station properly.

But even with the financial challenges it faces, WGRV continues to reach out to the community, with weekly jazz concerts and other events. Bennett and his colleagues aim to prove that the station can be just as viable as a full-power commercial broadcaster.

“We may be small, but we’re not going to act small,” he says.