DENVER, Colo. — At the PBS Annual Meeting today (May 15), Chief Programmer John Wilson answered a question many programmers had been asking lately: What are PBS’s plans for 8 p.m. Sundays?

Beginning in September, that spot will go to a Brit hit, Call the Midwife, a BBC drama based on memoirs of a young midwife in London’s East End in the 1950s. Wilson noted that when the show premiered in Britain in January, it scored higher audience numbers than Downton Abbey. 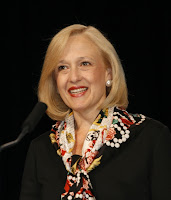 Wilson also had good news regarding overall pledge proceeds so far this year, up 2.7 percent systemwide over fiscal 2011. (Total number of pledges was down 1.5 percent, minutes spent pledging were up 1.6 percent.)

PBS President Paula Kerger (right) welcomed more than 800 attendees to the Mile High City with more numbers. Nova has nearly doubled its audience on Wednesday nights compared with last year, up 700,000 viewers. On the digital side, three years ago, users watched 2 million PBS videos online a month; this March, PBS web and mobile platforms received some 140 million streams. Also in March, visits to the PBS Kids site were up 34 percent over one year ago.