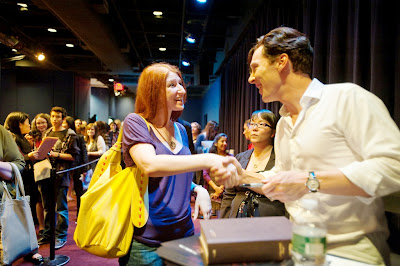 A long line of enthusiastic fans waited to greet Sherlock star Benedict Cumberbatch (right) at a special screening May 2 in New York City of the Masterpiece Mystery! show that premiered Sunday (to double the average PBS primetime rating). The crowd got to see a sneak peek of the program and participate in a Q&A with Cumberbatch; Steven Moffat, co-creator; Sue Vertue, producer; and Series Executive Producer Rebecca Eaton. Hosting were WNET and PBS.

Also in the audience was Beth Hoppe, PBS programming v.p., who told Current, “It was a really young crowd — like, 17 to 27 . . . And these kids were all tweeting at #SherlockPBS.”

At the beginning of the event, she said, “a lot of different PBS content ran, and they were screaming like Beatles fans every time that Benedict Cumberbatch was onscreen.”

“The other thing they screamed for,” Hoppe said: “Frontline. They screamed — screamed.” (Photo: PBS/Stephanie Berger)