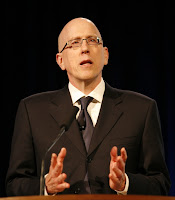 DENVER, Colo. — Jason Seiken, PBS Interactive chief, told a packed audience at the PBS Annual Meeting that “a magical opportunity will slip through our fingers if we don’t have the courage to change” and fully embrace the potential that video presents to public TV.

“We are in the early stages of a two- to five-year land grab that will reshape the video industry in a way not seen since Hollywood in the early 20th century,” he said. “For media organizations, this video revolution will determine who wins, who merely survives, and who perishes.” Some 100 million Americans watch videos online daily; last year, YouTube had 1 trillion views, Seiken noted — and that number is doubling every two years. Next year, more than half the televisions in the country will be tethered to the Internet.

Each PBS station, with the help of PBS Interactive, needs to become “the YouTube of its local community, the go-to place for video about that community.”

Seiken’s vision involves using PBS national platforms as a distribution vehicle not only for national presentations but also for local content, creating a “frictionless flow” between the two on the web, smart TVs, Android, iPhone and iPad apps. “Regardless of platform,” he said, “national builds it at scale, local populates it with content, and the audience sees content from both national and local.” The crowd liked that notion, stopping Seiken with applause.

He said stations need to “massively expand their video footprint” within their communities, and PBS Interactive is exploring tools and techniques for low-cost, high-quality production. Seiken cited the Off Book project as one early example. The 13-part web series on experimental and nontraditional art forms on PBSArts.org launched last July and costs just $600 a minute to produce, he said. It’s averaging 70,000 video views per episode, “which is more than most primetime episodes.”

Such innovation “is public TV’s birthright,” he told the crowd. “It’s something we were created to do but never had resources to accomplish. Now the world has changed, and production costs are plummeting. We have the brands. We have the video pedigree. This is our moment.”

But there is another future, he said, which is “frankly, more likely. It’s easier to just embrace what we humans love best — the status quo.”

“In half time it took public television to debate the Prosper [online national fundraising] project,” Seiken said, “a startup company called Burbn was conceived, built, launched, failed, pivoted to an entirely different name and product, built the product, launched the product — called Instagram — grew to 30 million users, and was sold for 1 billion dollars.”

“Forty years ago our predecessors sat in rooms like this and invented the future – because they acted as entrepreneurs,” he said. “We have it in our power to invent a new golden age of public television, but to do so requires us to reactivate our entrepreneurial DNA.” (Photo: Martin Allred/PBS)