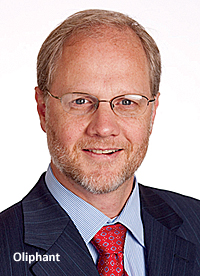 Answering the call from the John S. and James L. Knight Foundation for matching grants to address gaps in local news coverage wrought by the decline of newspapers, the Pittsburgh Foundation put up $232,000 to help start a new web-based investigative-journalism organization, PublicSource. It spent another $500,000 to help turn WDUQ, a university-owned NPR news and jazz radio station that was put up for sale in 2010, into an all-news station and digital-journalism hub.

“We had in front of us an incredible opportunity to create and marry two new resources that could fill the news-reporting gap in our city and make people better informed,” Oliphant says. “It was especially exciting because thinking strategically about journalism and public media was new to us, and we were ready to jump in.”

With the grants, the Pittsburgh Foundation also jumped into the new mainstream of public-media philanthropy, one that challenges pubcasters to think beyond their broadcast traditions and established practices for community service.

Some of America’s biggest foundations, most notably the Ford Foundation and the Carnegie Corp. of New York, were instrumental in the birth of the public-broadcasting system in the 1950s, ’60s and ’70s. Since then, dozens, if not hundreds, of private grantmakers have given to the field. Fundraising experts and other observers say the number of community, place-based and family foundations involved in public media philanthropy has recently expanded, although the trend hasn’t been documented.

Together, these funders have invested hundreds of millions of dollars into wide-ranging needs of public radio and television, supporting their operations, programming and capital projects.

Now, more foundations are looking beyond the field’s broadcast infrastructure and are aiming their support at projects and ventures meant to help pubcasters redefine their roles for a new digital age.

As public broadcasting evolves into public media, so does the foundation world’s response to it, says Amie Miller, foundation expert at DEI, the nonprofit consulting company specializing in public radio fundraising. Just as foundations took the lead in building the public broadcasting system and assisting as it developed other means of financial support, they now look to support public-service media in a time of “great transition,” she says.

Ford, which helped put 33 local public television stations on the air in the 1950s and invested in national program production and documentary films over several decades, exemplifies this shifted emphasis. It recently completed a five-year, $50 million initiative aimed at elevating public media’s work on digital platforms and its service to diverse audiences. Grants also went to startups such as Public Radio Exchange, the Massachusetts-based nonprofit aligned with the foundation’s interests in promoting innovation in public media technology, programming and distribution.

After the initiative wound down last year, Ford began emphasizing news content, according to Fiona Guthrie, public engagement strategist. It funded the new Marketplace news desk covering wealth and poverty issues, for example, and awarded a grant to ProPublica for reporting on education and criminal justice.

“The goal of these efforts is to contribute to robust discourse on important issues of social justice at a time when the ability of traditional media to cover many of these subjects has been greatly reduced,” Guthrie writes in an email.

Along with the rapidly shifting terrain of the news industry, many other changes are roiling the public-media landscape. Among them: potential government cutbacks, the lingering effects of the recession, new competition from a host of nonprofit and for-profit media ventures, and seismic changes in the way audiences consume and interact with media.

Many funders also find themselves in flux. As they recover from the economic downturn, they’re seeking the most bang for their grantmaking bucks and trying to discern the best ways to use media in their own work. Many recognize pubcasters as attractive partners.

Like the Pittsburgh Foundation, these grantmakers regard public media as a potential solution to the contraction of traditional ad-supported news media in their cities, and they want to support public stations during the shakeout. Many funders also recognize pubcasters as effective community storytellers who play central roles in their region’s civic and cultural life.

Much of the attention, too, grows from foundations’ interests in engaging pubcasting audiences and informing them about issues that fit within their funding priorities.

“We know that public broadcasting can move the needle on an issue,” says Robert Shull, program officer at the Public Welfare Foundation in Washington, D.C., which last year approved a two-year, $100,000 grant to NPR for coverage of workers’ rights. It was the foundation’s second such grant to NPR. “We don’t have media as a funding area, but we know media coverage is a good investment for us in the areas that are our priorities, like labor and the workplace.”

Annual tallies of foundation grants issued each year by CPB — a total of about $210 million in 2009, the latest year for which figures are available — don’t include grants to media organizations and projects that might directly provide content, support or capacity to public broadcasting. Without counting awards to nonprofit news organizations such as ProPublica or Pittsburgh’s PublicSource, for example, any picture of private-funder philanthropy is incomplete.

In addition, the recession has skewed giving trends. Total annual grant awards reported by CPB rose through 2008, then fell nearly 7 percent in 2009 — a pattern seen in all segments of philanthropy.

Foundation grants as a percent of pubcasters’ total revenue had been slowly ticking up, too, according to CPB, a trend that continued through 2009 — from 6 percent in 1999 to just shy of 8 percent 10 years later. But philanthropic grants are a small portion of public broadcasting’s total revenues. Government-related aid accounts for about 40 percent of income; membership revenues make up more than one-quarter; and corporate underwriting typically brings in revenues double the share of foundation grants.

Still, foundations have greater influence on the field than the numbers might suggest, according to philanthropy and media experts. Grantmakers often invest in start-ups, innovative efforts or orphan projects that might have a ripple effect across the field or find scale over time. They also have the flexibility to support capital projects, such as the building of transmission towers, which can be a difficult sell to individual donors. And foundations often provide lead or matching gifts that aim to attract additional private resources and government money.

Two research groups — the Foundation Center and GuideStar — have teamed up with the Ford Foundation and the affinity group Grantmakers in Film and Electronic Media (GFEM) to develop a system for tracking grantmaking in journalism and media. The project is intended to give the first detailed look at who the funders are and exactly where their money is going, but it is a couple of years away from producing its first report.

Whatever the exact size and scope of grantmaking, though, observers inside and outside the field say one thing is clear: Foundation giving to public media is becoming more strategic and deliberate.

“The old mode of getting one-off funding for a program or capital need is a thing of the past,” says Jack Galmiche, president of the Nine Network/KETC in St. Louis. “We need to work with foundations to learn about their funding priorities, and we need to demonstrate that we can make the impact they are looking for.”

More and more, he and others say, funders that gave exclusively for general-operating support now make grants for specific initiatives, especially projects meant to engage the community on an issue. Or they split their gifts between traditional public media and new, usually digital, news ventures. Foundations also appear to be taking a shine to efforts that elevate different forms of journalism — international, hyperlocal, reporting with a focus on diversity — and news coverage that promotes topics important to the grantmakers themselves. Collaborative efforts between pubcasters and other types of media organizations, especially online projects, also have won major foundation backing.

A key challenge for pubcasters, according to experts in the field, is to not just follow the money or the latest fad among funders but to pitch programs that fit into their mission and would be sustainable even if a grantmaker should pull out. Pubcasters, they say, must also continue to enunciate a solid case for much-needed basic support, even when they may be wooing funders to back particular projects.

As for the grantmakers, says Vince Stehle, GFEM’s executive director, they too must be mindful of the critical needs of the system even as they pursue their own strategic course.

“Any foundation program officer might be focusing on a specific issue — health or education — and want to support that particular program that appears at 8:30 on Tuesday evenings,” Mr. Stehle says. “But there is also the channel, the station, the system through which that program is broadcast, and that underlying support can’t be neglected.”

When Rich Homberg at Detroit Public Television talked to officials at a local foundation about supporting special coverage of a week-long science and policy summit on the future of the Great Lakes, he was careful to maintain the funder’s interest in also continuing to provide money to meet the station’s operating budget.

“[The Fred A. and Barbara M. Erb Family Foundation] is concerned about the environment, so we learned from them, and then offered to put our unique services behind Great Lakes Week,” Homberg says (Current, Oct. 17, 2011). “We looked at that as enhancing our relationship with them, not changing what we had in place.”

Erb gave DPTV its usual $100,000 grant for general operations last year plus an additional $100,000 for production and programming around the Great Lakes meeting.

Similarly, in Pittsburgh, where the community foundation stepped out last year to make those bets on two start-up news organizations, the funder also awarded WQED, the pubcaster broadcasting PBS and classical music programming to the region, its usual $100,000.

“The whole industry is in an exploratory phase looking for that new business model that works,” says Oliphant, of the Pittsburgh Foundation. “New media, old media, we’re all in it for the long haul, foundations, too.”

Partner up, get local for best shot at funding, execs advise, April 2012

Local funders, including the Pittsburgh Foundation, backed the conversion of WDUQ-FM to a news format in the station’s sale and management change, January 2011.

“Journalism and Media Grant Making: Five Things You Need to Know, Five Ways to Get Started” from the Knight and William Penn foundations, 2011.

“State of Funding in Information and Media among Community and Place-based Foundations,” February 2012, by consultants FSG for the Knight Foundation:

FCC report “The Information Needs of Communities: The changing media landscape in a broadband age.”

Public broadcasting system revenue, 1999 to 2009, as compiled and reported by CPB.