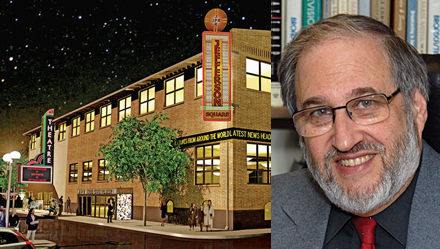 The radio net's foundation, led by Jefferson Public Radio chief Ron Kramer (right), proposes to build a new HQ and renovate a theater next door in Medford, but university auditors see too much risk. (Image at left: artist's rendering courtesy of JPRF.)

The radio net’s foundation, led by Jefferson Public Radio chief Ron Kramer (right), proposes to build a new HQ and renovate a theater next door in Medford, but university auditors see too much risk. (Image at left: artist’s rendering courtesy of JPRF.)

Jefferson Public Radio’s Ron Kramer is fighting to keep his job as executive director of the public radio service he’s built over nearly four decades across a sparsely populated region of southern Oregon and northern California.

Kramer, who is contesting the decision, can continue to manage the foundation because the university has no control over it. The pubradio veteran insists that his dual roles managing both JPR and its sister nonprofit are both appropriate and cost-efficient.

“JPR can only work if both the foundation and the university are rowing in the same direction,” said Kramer. “The same person has to be director of both. There’s not enough money to fund a duplicative administrative structure.”

Under the university’s plan, Kramer will lose most of his $94,728 salary — the foundation pays just $12,500 of it, according to tax filings.

Kramer has held the dual roles for 15 years, with the university’s blessing, until now. He is furious and not planning on going anywhere.

JPR and the foundation had combined assets of more than $9 million as of June 23, 2010, according to a report by university auditors who examined the financial relationship between the organizations last year. The total revenue stream for both entities in 2010 was $4.2 million.

The report, released last September, warned SOU that JPRF’s liabilities exceeded the debt-burden ratio allowed for higher-ed institutions, and that its ambitions to develop new properties would strain the local fundraising pool that the university taps for its own development needs. It also called on SOU to “eliminate the conflict of interest that exists with the JPR Executive Director and the JPR Foundation.”

Neither Kramer nor JPRF were accused of wrongdoing. “No one is saying that there is malfeasance,” said Jim Beaver, spokesperson for SOU. “We are just saying there needs to be some tighter controls.”

After the dispute erupted into public view last month, all three parties — SOU, Kramer and JPRF — hope to negotiate a settlement. A previous attempt at mediation broke down last November.

The dispute centers on Kramer’s ambitious expansion of JPR and its sibling nonprofit over decades, the unusual business model he developed to sustain them and competing ideas about standards for preventing conflicts of interest in nonprofit fundraising and operations.

When Kramer signed on in 1975, KSOR was a 10-watt, student-operated campus station, and he set out to convert it into a full-service public radio station. “KSOR grew into a network of satellite radio stations owned and operated by (the university) and was renamed JPR,” according to the audit report.

Today, through its translator system, JPR covers a 60,000–square-mile area of southern Oregon and northern California. It’s the largest translator network in public radio, according to Beaver.

The sister nonprofit JPRF, founded in 1997, operates JeffNet, an Internet service provider that has served southern Oregon since 1995. It also owns two performance venues — the Cascade Theater in northern California and the historic Holly Theater in downtown Medford, Ore. The latter venue, purchased in 2010, and a nearby 28,000–square-foot warehouse that was donated that same year by a local businessman are part of a major renovation project that would provide a new home for JPR. Although JPRF signed the contract to purchase the Holly in October 2010, the deal didn’t close until April 2011.

The total for both renovations is about $7 million. JPRF Chair Steve Nelson, a professional financial advisor, said the foundation would undertake renovations on an incremental pay-as-you-go basis.

The foundation pulled off a similar project nearly a decade ago, in 2004, when it reopened the Cascade Theater in Redding, Calif., after a four-year renovation. The Oregon University System supported that expansion, but last year’s audit cautioned against allowing JPRF to take on more debt for the new project.

As the university sees it, allowing Kramer to wear two hats — as executive director of both JPR and its sister nonprofit, which have many financial relationships — poses a serious conflict of interest, and it’s insisting that the two jobs be separated.

After combing through accounting records of both organizations last year, university auditors concluded that funds are commingled and the current arrangement poses a “high risk” to the university if not resolved. In addition, Kramer had negotiated contracts between the university and the foundation, presenting a clear conflict of interest in representing the interests of both entities.

Nelson believes the system has worked well throughout the years, and has kept JPR thriving.

“If you duplicate administrative functions, those dollars have to come from somewhere,” said Nelson. “If we have to pay for a separate executive director and staff, guess who will get the short shrift? Radio.”

“We need a lean administrative structure so we can do outside-the-box projects to fund the quality of radio that our listening audience has become accustomed to,” Nelson said.

Although many pubcasting outlets have sister nonprofits that operate as their fundraising arms, JPR’s structure is unusual.
“I think you’ll find unanimous agreement in the nonprofit world that the same person should not head a foundation and, at the same time, run the entity that foundation exists to support,” said Rob Gordon, president of Nashville Public Radio. “You have to wonder why this wasn’t raised before.”

So why has this become an issue now?

One answer, alluded to by the auditors, is that southern Oregon’s Rogue Valley has a limited pool of money, and the foundation’s fundraising and capital campaign efforts cut into those of the university.

The university is also concerned about its own liability.

“The foundation is in the business of making money, and if they make enough money, then they send it to the radio station,” said Beaver. “For the university’s sake, they are concerned about some risk. What if the foundation can’t cover its expenses? Would they, for example, use money donated to membership to pay for the lack of ticket sales at a Lily Tomlin concert at the Cascade?”

As Kramer sees it, JPR’s unusual business model developed in response to declining university support. Since 2001 SOU’s direct funding to JPR has dropped 50 percent, he said. “Of course, the cost of providing radio has not gone down. So the challenge for the foundation was to find ways to keep everything afloat. So it launched initiatives that are not directly related to radio.”

Beaver told the Medford Mail Tribune that university officials didn’t see a problem with the foundation’s assets until after the purchase of the Holly Theater, which “raised a red flag with auditors.”

Kramer believes that the purpose of the audit was to force his ouster. “[I]n hindsight, the audit seems to have been ordered to have a predetermined conclusion,” he said.

Nashville Public Radio’s Gordon has known Kramer for 30 years, and says the university has taken on a formidable opponent.

“It’s nearly impossible to win an argument with Ron Kramer,” said Gordon. “He is so smart, and he has this aggressive intellect and energy to defend his position. I mean that as a compliment. If he’s convinced himself of the rightness of running both organizations, I expect he will do whatever it takes to prevail.”

Nelson, the foundation board chair, was circumspect about prospects for resolving the dispute. “This is pretty much a stay-tuned situation,” he said. “We are going into mediation, and we hope we can design a regime that allows us all success.”

In Redding, Calif., Jefferson Public Radio restored the 1935 Cascade Theater and converted it to a performing arts center.

Kramer challenges the audit, March 28, in the Medford Mail Tribune.

The rehabbed Cascade Theatre in Redding, Calif., is operated as a performing arts center by Jefferson Public Radio.

Secession is in the blood of Jefferson Public Radio — named for the proposed State of Jefferson that would combine he sparsely populated adjoining frontiers of Oregon and California.