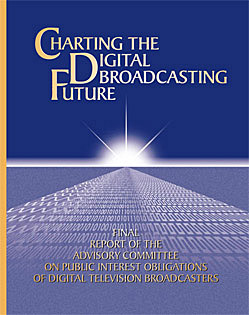 a.k.a. PIAC or the Gore Commission

See PDF of full report; sections of the report posted in HTML by the Benton Foundation; and the list of commission members.

As this Nation’s 1,600 television stations begin to convert to a digital television format, it is appropriate to reexamine the long-standing social compact between broadcasters and the American people. The quality of governance, intelligence of political discourse, diversity of free expression, vitality of local communities, opportunities for education and instruction, and many other dimensions of American life will be affected profoundly by how digital television evolves.

This Advisory Committees recommendations on how public interest obligations of television broadcasters ought to change in the new digital television era represent a new stage in the ongoing evolution of the public interest standard: a needed reassessment in light of dramatic changes in communications technology, market structures, and the needs of a democratic society.

SECTION I.
THE ORIGINS AND FUTURE PROSPECTS OF DIGITAL TELEVISION

Using an additional 6 megahertz (MHz) of broadcast spectrum temporarily granted by Con- gress and the Federal Communications Commission (FCC) for a period of no fewer than 9 years, broadcasters will be able to develop a diverse range of new digital television program- ming and services while continuing to transmit conventional analog television programming on their existing allotments of spectrum, as required by the Telecommunications Act of 1996.

One of the primary rationales for the Nations transition to digital television is high-definition television, or HDTV. This transmission mode contains up to six times more data than conventional television signals and at least twice the picture resolution. But DTV also enables a broadcast station to send as many as five digital standard-definition television (SDTV) signals, which are not as sharp as HDTV but still superior to existing television images.

This new capacity, known as multicasting or multiplexing, is expected to allow broadcast- ers to compete with other multichannel media such as cable and direct broadcast satellite systems.

Another DTV capability is the ability to provide new kinds of video and data services, such as subscription television programming, computer software distribution, data transmissions, teletext, interactive services, and audio signals, among others. Referred to as ancillary and supplementary services under the Telecommunications Act of 1996, these services include such potentially revenue-producing innovations as providing stock prices and sports scores, classified advertising, paging services, zoned news reports, advertising targeted to specific television sets, time-shifted video programming, and closed-circuit television services.

These choices — HDTV, SDTV, and innovative video/information services —are not mutually exclusive. Within a single programming day, a broadcaster will have the flexibility to shift back and forth among different DTV modes in different day parts. Although many existing programming genres and styles will surely continue, innovations in video programming and information services will arise, fueled in no small part by the anticipated convergence of personal computer and television technologies.

Federal oversight of all broadcasting has had two general goals: to foster the commercial development of the industry and to ensure that broadcasting serves the educational and informational needs of the American people. In many respects, the two goals have been quite complementary, as seen in the development of network news operations and in the variety of cultural, educational, and public affairs programming aired over the years.

In other respects, however, Congress and the Federal Communications Commission have sometimes concluded that the broadcast marketplace by itself is not adequately serving public needs. Specific policies have sought to foster diversity of programming, ensure candidate access to the airwaves, provide diverse views on public issues, encourage news and public affairs programming, promote localism, generate more educational programming for children, and sustain a separate realm of noncommercial television programming services.

The fundamental legal framework that still governs the broadcast industry, based on the notion of spectrum scarcity, sets it apart from other media. Congress has mandated that licensees serve as public trustees of the airwaves. Broadcasters have affirmative statutory and regulatory obligations to serve the public in specific ways. The U.S. Supreme Court has upheld the public trustee basis of broadcast regulation as constitutional.

The vast new range of choices inherent in digital television technology makes it impossible to transfer summarily existing public interest obligations to digital television broadcasting. A key mandate for the Committee, therefore, has been to suggest how traditional principles of public-interest performance should be applied in the digital era. A second mandate has been to consider what additional public interest obligations may be appropriate, given the enhanced opportunities and advantages that broadcasters may receive through digital broadcasting.

Mindful of the uncertainties in how digital television will evolve, the Advisory Committee has operated under several basic principles in formulating its recommendations. The first is that the public, as well as broadcasters, should benefit from the transition to digital television. Second, flexibility is critical to accommodate unforeseen economic and technological devel- opments. Third, the Advisory Committee has favored, whenever possible, policy approaches that rely on information disclosures, voluntary self-regulation, and economic incentives, as opposed to regulation.