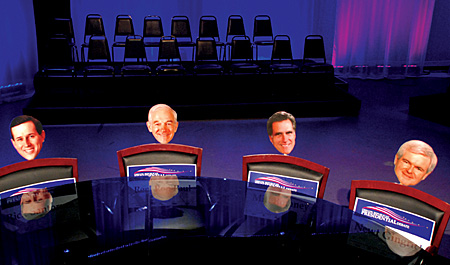 Cardboard cutouts stood in for GOP primary hopefuls as the Oregon network prepared for a public TV first, soon to be canceled just days before broadcast.

Cardboard cutouts stood in for GOP primary hopefuls as the Oregon network prepared for a public TV first, soon to be canceled just days before broadcast. (Photo: OPB)

When three unlikely partners — a conservative newspaper in the nation’s capital, a blue-state Republican organization and a public broadcasting station in a quirky, liberal city — set out last fall to change the tenor of GOP primary debates, they nearly pulled it off.

But four days before Republican presidential hopefuls were to face off in a live national broadcast from Oregon Public Broadcasting’s studios in Portland, the candidates pulled the plug.

This is the story of the debate that wasn’t.

The March 19 Republican presidential primary debate among Mitt Romney, Rick Santorum, Newt Gingrich and Ron Paul was to have been the last of 20 televised debates between this year’s field of GOP contenders. And it would have made pubcasting history as the first presidential debate presented nationally by a public station [see sidebar] . Because the event was officially sanctioned by the Republican National Committee, OPB and its partners thought they had a good shot at making it happen.

Partnering with OPB on the complex project were the Washington Times and the Oregon Republican Party. The Times would handle national press credentials and supply one of the two moderators; the Oregonians collaborated in producing.

Ultimately the timing of the debate, viewer fatigue from earlier face-offs on cable news channels and the demands of an extended primary campaign killed the Oregon event. Fending off Santorum’s surging candidacy, frontrunner Romney turned his attention to on-the-ground campaigning in vital states. And Santorum said if Romney wouldn’t be in Portland, neither would he.

As uncertainty over the candidates’ commitments to the debate grew over the last few weeks, the partners had to proceed — full speed ahead — as if it would indeed happen. Even if it meant moving the entire production to Chicago, a contingency plan that OPB President Steve Bass proposed just six days out.

“We wanted to see it through to completion,” Bass said. The partners “played every single angle to make this happen.”

Working on the project yielded intangible rewards. “I’d say the affinity that developed between the partners through this process was one of the high points,” said Greg Leo, chief of staff of the Oregon Republican Party. “The relationships we’ve made will live beyond this project, and we’ll look for other opportunities to work together.”

While that sense of enduring commitment between Republicans and public broadcasters may surprise outsiders, Bass described the relationship as a natural one. “I think people would look at OPB, the Washington Times, the Oregon GOP and the national RNC, and think, ‘Wow, that’s a really strange alliance. I wonder how that’s going.’’’

“But I didn’t go in with presuppositions,” Bass said. As public broadcasters, “we should be working with all sorts of people all the time.”

Oregon Republican Solomon Yue, vice chair of the RNC’s debate subcommittee, proposed last fall to stage the primary debate, and he asked Leo to draw up a formal proposal. Yue was in a position to secure the RNC’s endorsement of the face-off.

Any news organization can propose a debate and try to persuade candidates to participate, but only a handful of events are officially sanctioned by the parties. The RNC sanctioned seven during the 2012 primaries, including OPB’s, according to Leo.

Around the same time that Leo and Yue were working their RNC contacts, representatives of the Oregon Republican Party and the Washington Times approached Bass about partnering on the event.

Bass took the proposal to CPB President Pat Harrison, who endorsed it. PBS and NPR both agreed to distribute it for national broadcast.

CPB and PBS provided funding through their jointly managed Program Challenge Fund. A CPB spokesperson declined to specify the size of the grant because final costs are being calculated.

“The RNC wanted something public-broadcasting style: serious, quiet, more in-depth” than the flashier debates that had occurred so far, Leo said. He believes the party was looking for a new model for presidential debates, one that lowered the volume and hype of the face-offs produced by CNN, MSNBC and Fox.

When Bass and David Davis, OPB’s v.p. of TV production, decided to tap an outside producer for the debate, they turned to Charles Stuart, a veteran of Boston’s WGBH who went on to produce for ABC News. Stuart and Bass had worked together at WGBH in the 1990s, and collaborated on The Long and Short of It, a political show featuring Sen. Alan Simpson (6 feet 7 inches tall) and former Labor Secretary Robert Reich (4 feet 10), which aired live. 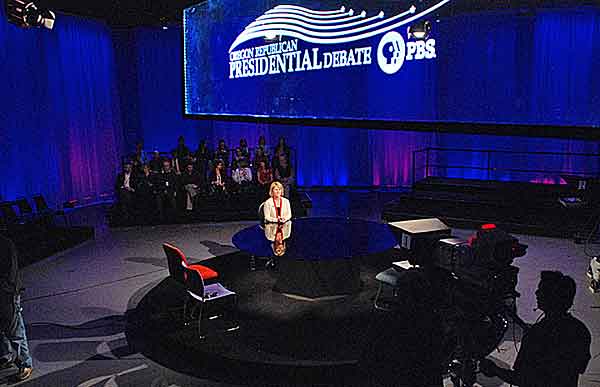 Of spin rooms and SWAT teams

Stuart jumped at OPB’s offer. Like Leo of the Oregon RNC, he had been troubled by the tone and tenor of the primary debates produced for cable news audiences.

“If you look at the debates in 2012, you essentially see a reality show,” Stuart said. There’s plenty of network branding, a huge auditorium, lots of jib shots — “like a sporting event,” he said.

“To me, it was painfully obvious that we needed the antithesis,” he said. “We needed to bring the PBS brand to the debate.”

Stuart envisioned a round table with the candidates and moderators — PBS NewsHour’s Ray Suarez and Ralph Hallow, chief political writer of the Washington Times — in swivel chairs so they could turn and face one another. Observers would sit in the round, “because with the audience on one side and the candidates on another, when you cut to a wide shot, visually it says it’s a performance,” Stuart said. “This needed to be a conversation.”

Stuart’s concepts for set design and production values were precisely what the partners were after. Leo and Allen Alley, chair of the Oregon GOP, attended the primary debate that CNN staged in Las Vegas last October, and had been especially disturbed by the production.

“It seemed almost like a gladiator contest in a modern Roman coliseum,” Leo said. Before the debate broadcast went on-air, a warm-up man worked up the studio audience, encouraging the crowd to react to the candidates’ sparring.

To stage their more civil debate in Portland, OPB and its partners would have to work through many complex logistics: decisions about where to locate a “spin room” for the national press; diplomatic choices over who among OPB’s supporters would be invited to attend. Studio seating was limited to 300, and each partner had just 100 tickets to distribute.

Meanwhile, everyone at OPB tried not to be distracted when Portland Police SWAT teams started practicing drills on nearby building rooftops.

A Hail Mary pass to Chicago

On Feb. 22, in an online story, CNN said its debate that night in Arizona “may be the final debate of the season.”

Super Tuesday contests on March 6 were looming in nine states (10, if you count the two-week caucuses in Alaska) and signaled the start of intense in-person campaigning.

The partners realized that their event might be in jeopardy. Getting frontrunner Romney to Portland on March 19 — the day before the important Illinois primary, with its 54 delegates at stake — was looking more unlikely.

When scheduling the debate last fall, the partners saw advantages in a face-off that came after Super Tuesday. As Bass said in an announcement to stations, the nomination would still be in play, yet the primary season would be moving into a final, critical stage.

Though the Oregon debate had been positioned as the last of the season, presidential contenders have faced off much later in  primary races, according to debate expert Diana Carlin, a professor at Saint Louis University and founder of DebateWatch, a project of the bipartisan Commission on Presidential Debates. Sens. Barack Obama and Hillary Rodham Clinton met for their final match on April 16, 2008.

But in March 2012, the Republican contenders appeared increasingly reluctant to face off. As talk of viewers’ debate fatigue began circulating among political strategists, Leo said, the partners asked the RNC to help secure candidate commitments.

On Monday, March 12, Leo received an answer. Benjamin Ginsberg, legal counsel to the Romney campaign, sent a one-line email. His candidate would not attend the Portland debate because he’d be campaigning in Illinois.

Bass got word while he was in St. Paul, Minn., at a meeting of public TV’s Major Market Group. He pondered options for a three-way debate between Santorum, Gingrich and Paul, and asked his MMG colleagues to react.

Later, he seriously considered moving the debate to where the candidates would be — in Chicago. WTTW, the city’s PBS station, was willing and able to host.

But by then it was too late to secure buy-in from the Santorum campaign, whose staffers were busy courting voters in Mississippi and Alabama.

“Eventually,” Leo said, the former Pennsylvania senator’s campaign staff said, “If Romney’s not there, Santorum wouldn’t be either.”

Bass notified the OPB staff on March 15. “As I told our partners on the phone just now, ‘We were on the 2-yard line with seconds to go in the game, and we had our biggest linemen on the field hoping to score.’ We put absolutely everything we could into it and came up short. But we never gave up, even when some thought we should.”

“You guys are the best there are. Be proud. We played a great game.”

Oregon Public Broadcasting’s GOP primary debate would have been the first produced at a public TV station and carried live on the PBS National Program Service in primetime.

But other pubTV units have produced national campaign broadcasts that did occur. In 2000, New Hampshire Public Television primary debates were distributed through the NPS but not in primetime, according to PBS. In June and July 2007, Tavis Smiley moderated candidate showcases called the “All-American Presidential Forums on PBS,” live from Howard University in Washington, D.C., in which journalists of color interviewed Republican and Democratic contenders.

Since 1980, Iowa Public Television has partnered with the Des Moines Register for several debates, usually carried on NPS live, generally midday. This year, when the Iowa caucuses were moved up, Iowa PTV’s event was scheduled close to same time as an ABC News/Republican Party debate. The Register joined in sponsoring that debate, so Iowa PTV changed its format to one-on-one conversations with the candidates.

Plans for the Oregon debate were announced in October 2011.

One early snag in the debate process, in January, was created by Portland Mayor Sam Adams, who publicly bemoaned security costs for the OPB event. Greg Leo of the Oregon Republican Party told Current that was a “galvanizing moment” for the debate partners: his group, The Washington Times and the pubTV network. OPB President Steve Bass “rose to the challenge” of defending the debate, Leo said. “He was the main contact with the mayor, and he stood tall. And he won our respect by doing so.” Ultimately, the mayor backed down.

The Oregon Republican Party announces cancellation of the debate.

Ralph Z. Hollow, chief political writer for The Washington Times, would have co-moderated the Oregon debate with Ray Suarez of PBS NewsHour.