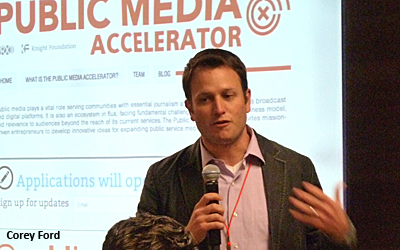 Public Media Accelerator, a laboratory for developing new-tech public services backed by a $2.5 million grant from the Knight Foundation, will be led by a former Frontline producer who is returning to public media after a stint in Silicon Valley’s startup culture.

Corey Ford earned production credits on 17 Frontline documentaries before leaving public TV to earn an M.B.A. at Stanford University. His interest in multidisciplinary approaches to technology innovation led him to take a fellowship at Stanford University’s Institute of Design. From there, he was recruited to direct the Runway, a nine-month program for aspiring entrepreneurs operated by Google Chair Eric Schmidt’s venture-capital fund, Innovation Endeavors.

Ford will bring that experience to public media as director of Public Media Accelerator, the latest and boldest initiative yet undertaken by Massachusetts-based Public Radio Exchange to spur innovation.

In Twitter-ready terms, he’ll be heading PMX at PRX.

PMX is “a new kind of search for talent — for mission-driven entrepreneurs, technologists and visionaries who will help build the next generation of public-media ventures,” said Jake Shapiro, PRX chief exec, before introducing the new hire March 8 at the Integrated Media Association conference in Austin, Texas.

“I feel like my whole career has been built for this opportunity,” said Ford.

He said the project shares the spirit of experimentation and adventure that allowed major pubcasting programs such as Frontline and All Things Considered to take root and flourish three decades ago. It aims to offer innovators an “entrepreneurial playground that is appropriate for today — for today’s audiences, for today’s emerging technologies and today’s business models.”

For PMX he aims to recruit multidisciplinary teams, working from a blank slate, to develop prototypes for new public-media services, Ford told Current. He also wants to use pubcasters’ “wisdom and knowledge” to address the difficulties that disruptive technologies pose for legacy media.

“One of the reasons we’ve taken on the model of an accelerator is to help reveal to the field what is happening in Silicon Valley,” Shapiro said. “Accelerators are cropping up all over the place, and this is an opportunity to help explain and leverage how you can create something new,” demonstrating how startups are assembled and how they’re evaluated by funders and users.

Shapiro wants to give innovators room outside of stations to try promising ideas and see whether they take off. Pubcasters can participate as mentors and incubators for PMX-backed concepts and as potential investors for those who turn their ideas into startup ventures. The capital is likely to run in the tens of thousands of dollars, he said.

Ford, who officially signs on with PMX in April, will run the Accelerator from Silicon Valley. Details about funding criteria and the application process will be announced later this spring, and applications will be accepted in the summer.

Accelerators are a proven model for giving R&D capital and intensive mentoring to digital entrepreneurs as they shape their ideas into new products and services, Shapiro said. Y Combinator, a prestigious one established seven years ago in the heart of Silicon Valley, served as the launching pad for Dropbox, Reddit, Loopt, and Scribd.

In his present job, at Runway, Ford tells would-be entrepreneurs: “We give you the cushion, connections, and coaching you need to take the entrepreneurial leap and succeed.”

The accelerator concept has been tailored to specialized niches, such as Rock Health, which incubates startups in health care. PMX is positioned as an accelerator for public media.

The capital will especially come in handy because pubcasting lost a major source of R&D money when Congress ended its add-on digital appropriations to CPB last year, Shapiro said.

Shapiro began developing the accelerator idea this summer in conversations with John Bracken of the Knight Foundation, a PRX funder that is investing broadly in game-changing concepts for digital-era journalism.

Knight, which recently split its annual News Challenge program into three grant contests per year, is trying to be more nimble in its grantmaking while creating new systems for supporting innovators, said Bracken, Knight’s director of media innovation.

“We learned from the News Challenge how important mentorship is to accelerate these projects,” Bracken told IMA attendees. “This is also a learning experience for us. We want Corey and the project to teach us more about how we can invest in the startups as well.”

Knight’s role and approach to investing in innovation is at the foundation of the Accelerator, said Kerri Hoffman, PRX associate director. “They’re really bold about taking chances on stuff that’s not entirely buttoned-down, and they encourage big thinking and ideas and experimentation. That’s not easy money to get — you usually have to have a plan.”

Although the Accelerator’s funding criteria have not yet been established, Shapiro knows that it won’t limit its seed funding to projects planned to be nonprofits.

“We’re interested in both the for-profit and nonprofit angles that this could end up taking,” Shapiro said. Ideas will be brought into the Accelerator at the “seed stage” and won’t be inherently commercial or noncommercial. Hybrid projects in the tech sector can attract for-profit funding and “help offset the limitations of public funding,” he said.

Next-generation public media won’t be defined by tax status, Shapiro said, but by “their mission, their intention and their impact.”